We spent a few days in southwest Wisconsin last week, including an afternoon with my brother-in-law the farmer. (As it happened, none of the three subjects in the headline came up.)

This admittedly bizarre headline refers to Dane County judge Patrick Fiedler, a Wisconsin native (his father was the presiding judge at my first murder trial), who ruled Sept. 9 (the date is important) that we Americans lack the following seemingly fundamental rights:

(1) no, Plaintiffs do not have a fundamental right to own and use a dairy cow or a dairy herd;

(2) no, Plaintiffs do not have a fundamental right to consume the milk from their own cow;

(3) no, Plaintiffs do not have a fundamental right to board their cow at the farm of a farmer …

(5) no, Plaintiffs do not have a fundamental right to produce and consume the foods of their choice …

Those bullet points in the original post seemed so crazy that I had to look at the court decision to see if that’s what Fiedler actually ruled. He did.

Of course, the plaintiffs had a, shall we say, intriguing line of legal reasoning:

Specifically, Plaintiffs argue that “[g]uidance on this issue [of whether there is a fundamental right to consume the food of one’s choice] can be gleaned from other United States Supreme Court cases that have dealt with the issues of liberty, right to privacy, and substantive due process.” … They then cite to cases that stand for a menagerie of rights such as: the right to possess or view pornography in the privacy of one’s home (see Stanley v. Georgia, 394 U.S. 557 (1969)); a woman’s right to have an abortion (see Roe v. Wade, 410 U.S. 113 (1973)); the right to refuse medical treatment (see Cruzan v. Director, Missouri Department of Health, 497 U.S. 261 (1990)); and the right to engage in consensual sexual conduct (see Lawrence v. Texas, 539 U.S. 558 (2003) … Plaintiffs then ask this court to declare that they have a fundamental right to consume the foods of their choice because “[w]hat good are all the fundamental rights mentioned above if a person cannot consume the food of his/her own choice?” …

The other constitutional claims Plaintiffs put forward in their brief are similarly underdeveloped. …

(See what happens? You legalize abortion and pornography and now we’re going to be besieged by farmers trying to sell unpasteurized milk!)

The judge having dismissed the plaintiffs’ unique constitutional reasoning, Fiedler then cites the crux of the matter:

Finally, it is clear from their motion to clarify that the Plaintiffs still fail to recognize that they are not merely attempting to enforce their “right” to own a cow and board it at a farm. Instead, Plaintiffs operate a dairy farm. (Emphasis added.) As this court already said in its decision and order, if Plaintiffs want to continue to operate their dairy farm then they must do so in a way that complies with the laws of Wisconsin.

Therein lies the rub. State law prohibits the sale of unpasteurized milk. State law should not prohibit the sale of unpasteurized milk to those who are willing to release the seller from legal liability, but that is not state law. The state Legislature passed a bill to legalize raw milk sales, but Gov. James Doyle vetoed it. (I am unaware of any current efforts to relegalize raw milk sales.) The plaintiffs were trying an end-around past state law by asserting rights that supersede the law, but a better argument was needed.

(And if you think state government has better things to do than regulate what farmers can sell, take a look at the Wickard v. Filburn U.S. Supreme Court decision. For those who think the U.S. is a free market economy, that decision may change your mind.)

The unpasteurized milk issue is similar to the current laws prohibiting use and sale of marijuana. In both cases the alleged benefits may be overblown, but ultimately the issue comes down to personal freedom, whether or not a plantiffs’ lawyers can make a more cogent argument in court. (That First Amendment thing should cover eating too, should it not?)

The major difference is the potential damage to the reputation of the state that calls itself America’s Dairyland on its license plates in the event of a wave of unpasteurized-milk illnesses. It is interesting to note, though, from this handy graphic provided by the Farm-to-Consumer Legal Defense Fund … 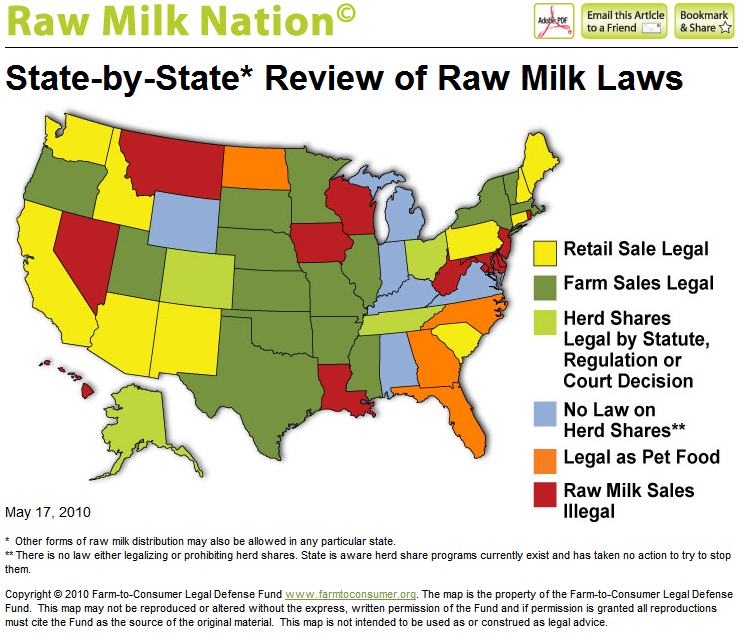 There is a bizarre twist to this story: Less than a month after handing down this decision, Fiedler resigned from the bench to work for a Madison law firm whose clients include Monsanto, one of the leaders in genetically modified agriculture. Food Freedom would have you believe:

Ruling against raw milk forces consumers to drink genetically modified, antibiotic-laden milk from cows fed an unnatural diet of pesticide-loaded feed.  No doubt that makes Monsanto a major fan of Patrick Fiedler.  His decision was rendered on Sept. 9 and he stepped down from the bench on Sept. 30.

This case begs for competent legal counsel who can get the outrageous decision overturned.

I’ll buy the appearance (without actual proof) of impropriety argument and a need for a better legal approach, whether in the courts or in the Legislature. But back in my Marketplace Magazine days, I did a story about several Northeast Wisconsin farmers who were selling beef and chicken from free-range cows and chickens and doing quite successfully, whether selling off their farms or at local farmers’ markets. (For one thing, premium pricing usually accompanies the term “organic” or its variations.)