Someone who calls himself or herself “wifactcheck” left this comment here last week:

… When the Governor and his legislative allies ram through significant and radical changes to 50-year old labor laws without ever having campaigned on those issues, they should expect extraordinary pushback in the form of citizen recall elections. These recall elections are not about one vote. They are about the Governor and his legislative allies intentionally and willfully concealing their plans and misleading the public during the election campaign in order to get elected. …

Even the Milwaukee Journal Sentinel wrote in March: “Walker never campaigned on disenfranchising public-employee unions. If he had, he would not have been elected.” …

I eagerly await your explanation as to why Wisconsin voters should sit back and blithely accept the dishonest and fraudulent campaigns of Gov. Walker and the Fitzgerald Brothers without taking steps to hold them and their allies accountable for their blatantly dishonest campaigns.

The writer claims (as do others) that the Walker campaign and Republicans had a secret infernal plot to smash Wisconsin unions under their baby-seal-skin boots assembled by toddlers in Chinese sweatshops, or something like that.

I disagree with this assertion, which I will get to momentarily. This brings to mind an interesting thought exercise, though: Is it worse to do something you didn’t say you were going to do, or to do something you said you were not going to do? The latter refers to Gov. James Doyle, who famously said, “We should not, we must not, and I will not raise taxes,” and then signed a $2.1 billion tax increase into law.

Doyle’s defenders would claim that the state’s finances were so much worse when he was forced to raise our taxes than when he made his no-tax-increases pledge. (Which is not entirely correct either, given that Wisconsin was one of two states to run GAAP deficits every year during the first decade of the 21st century, which means every year Doyle was in office.) If you buy that rationalization, then you also must accept that Walker may have decided that state finances were so bad that he had to do something drastic about our state’s billions of dollars in red ink. State employees cost the state $4.9 billion in compensation every year, which is a major chunk of the state budget. Local-government employees cost counties, municipalities and school districts another $5.76 billion every year, which is the biggest chunk of their budgets.

Regardless of whether you accept my assertion, any voter who didn’t think things were going to be different under Gov. Walker than they would have been under Gov. Tom Barrett wasn’t paying attention not merely during the campaign, but during the nearly nine years Walker was Milwaukee County executive. It is instructive to note that unions refuse to give Walker credit for an alternative choice he could have made to eliminate the 2009–11 budget deficit, which reached as high as $136.7 million. Instead of cutting public employee benefits, he could have cut 1,925 state employees. Perhaps, given the Milwaukee Teachers’ Educators Association preference of 350 teacher layoffs vs. all teachers paying more for their benefits, unions don’t believe in “shared sacrifice” after all.

But you don’t have to buy either of my explanations, because Walker’s campaign hid nothing, except perhaps to the illiterate or deliberately obtuse voter. 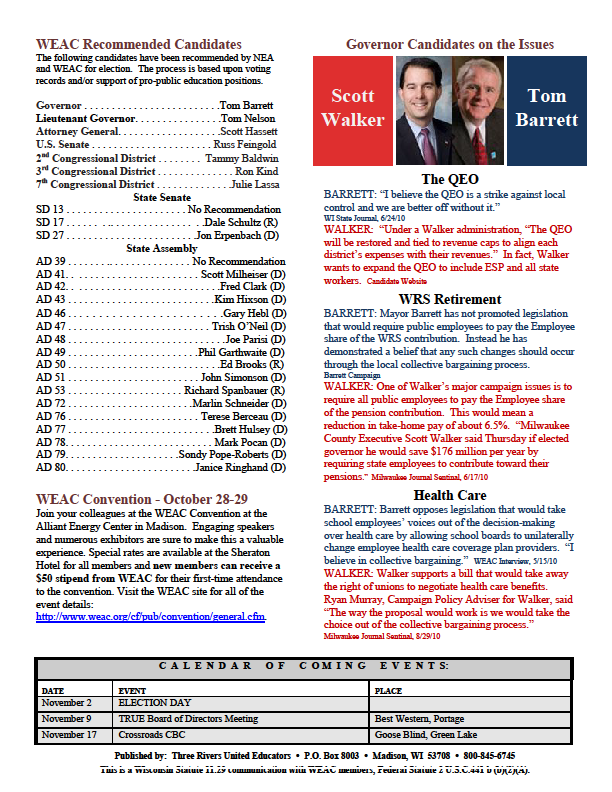 Alert reader Donna from Berlin brings to your attention this section of the November newsletter of True (as in Three Rivers United Educators) Views, which is posted on the Wisconsin Education Association Council’s website, comparing the stances of Walker and Barrett (to which I added the Milwaukee Journal Sentinel links):

BARRETT: Mayor Barrett has not promoted legislation that would require public employees to pay the Employee share of the WRS contribution. Instead he has demonstrated a belief that any such changes should occur through the local collective bargaining process. (Barrett Campaign)

WALKER: One of Walker’s major campaign issues is to require all public employees to pay the Employee share of the pension contribution. This would mean a reduction in take-home pay of about 6.5%. “Milwaukee County Executive Scott Walker said Thursday if elected governor he would save $176 million per year by requiring state employees to contribute toward their pensions.” (Milwaukee Journal Sentinel, 6/17/10)

WALKER: Walker supports a bill that would take away the right of unions to negotiate health care benefits. Ryan Murray, Campaign Policy Adviser for Walker, said “The way the proposal would work is we would take the choice out of the collective bargaining process.” (Milwaukee Journal Sentinel, 8/29/10)

This makes one wonder if union members pay attention to what their unions tell them. (It also makes one wonder if Journal Sentinel editorial writers read their own newspaper.) I’m not sure how the Journal Sentinel could have reported any more clearly that Walker wanted to require “state employees to contribute toward their pensions” as well as other public employees and “take away the right of unions to negotiate health care benefits.”

Whether the Walker campaign campaigned on cutting public employee benefits is up to the reader. It was up to the voter, and the voters made their opinions clear Nov. 2. But wifactcheck’s claim — which means the claims of those running against the six Senate Republicans in the next month, as well as those Democrats’ sycophants — that the Walker campaign and Republicans were “intentionally and willfully concealing their plans and misleading the public during the election campaign” is false. To paraphrase John Adams, Democrats and public employee unions are entitled to their own opinion; they are not entitled to their own facts.

16 thoughts on “Unions vs. the facts, or, Hiding in plain sight”