Back in July, I proved that those who claimed that candidate Scott Walker hid his desire to emasculate public  employee unions during his 2010 campaign were wrong.

My evidence then was two Milwaukee Journal Sentinel stories from June and August 2010, as well as a teacher union publication, brought to my attention by an alert reader: 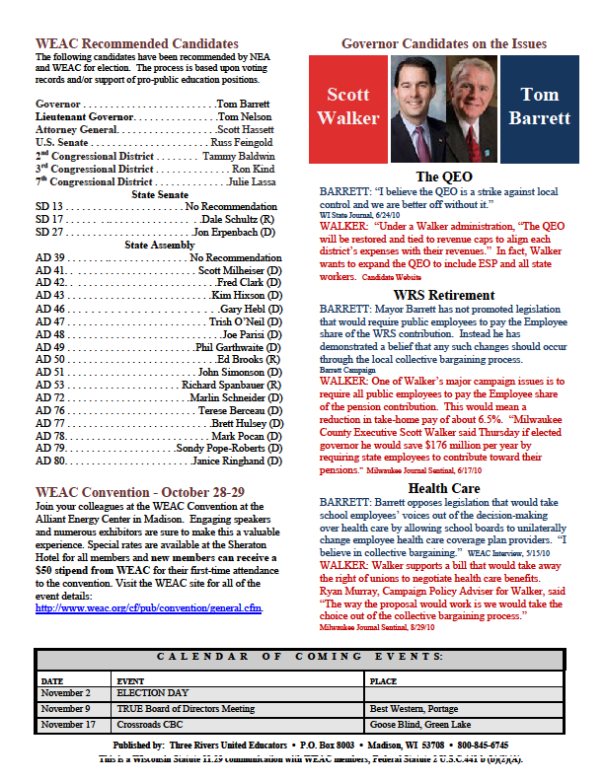 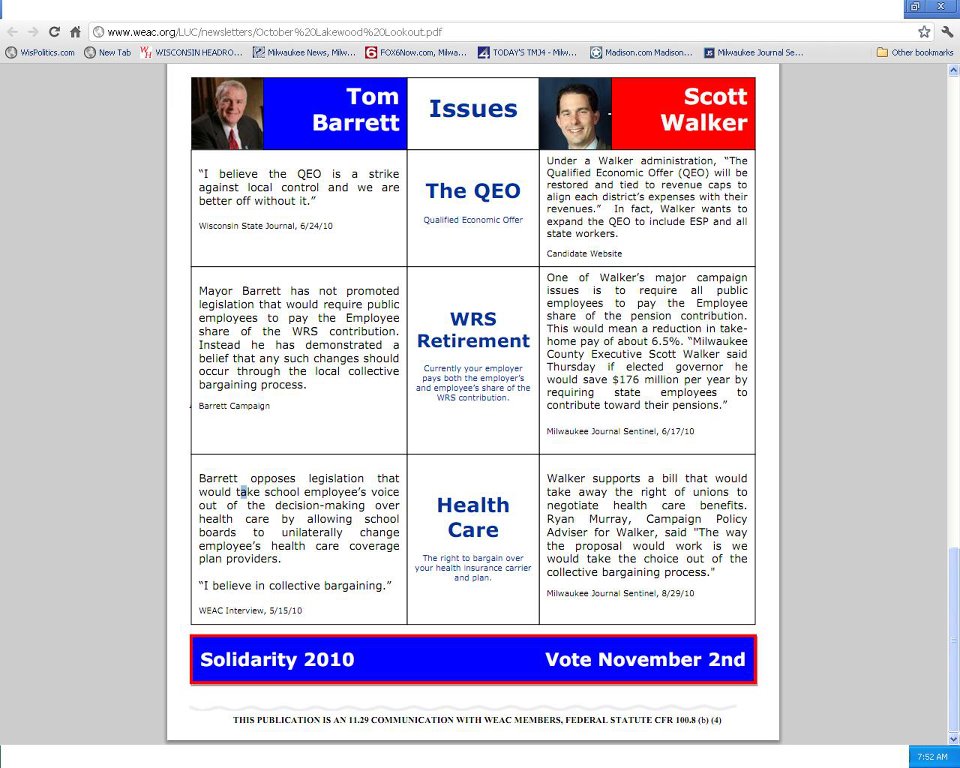 This is another piece of evidence that the Recall Walker movement, similar to the Recall ______ movements of earlier this year, is perpetuating a fraud upon the taxpayers and voters of Wisconsin. But voters should be used to this by now. How often were the words “collective bargaining” used by Democratic challengers during Recallarama I? Not once. Instead we got unconvincing sob stories about how Wisconsin’s (overrated) public schools were being destroyed by budget cuts, similar to the claims being made this recallaround.

(How can I claim that Wisconsin’s public schools are overrated? Simple.  Wisconsin schools have been near the top in per-pupil spending, when compared with other states, for decades. And yet Wisconsin has trailed the nation in per-capita personal income growth for more than three decades. The billions of dollars Wisconsinites spend on their public schools every year evidently is  not paying off in better incomes.)

We were told numerous times earlier this year by teacher union heads that government employees were perfectly willing to pay more for their benefits and retirement. (Something that never previously came up when public-sector employee benefits far exceeded private-sector benefits well before this year.) Every time a union head said that, he or she was making a completely unverifiable statement, an assertion unsupportable by evidence. There is no statewide teacher contract; every union contract with this state’s more than 400 school districts must be approved by that school district’s teacher union. (Look at Oshkosh Corp., whose union management negotiated a contract with the company, only to have the union members overwhelmingly reject it.)

The troll who calls itself “Wisconsin Fact Check” will probably continue to criticize Walker for not being specific enough in his plans against public employee unions — certification elections or something else about most taxpayers and voters could not care less. Such a level of specificity would be a standard to which Democrats are never held, of course. And you will not hear from the left one single admission about Gov. James Doyle’s pledge, “We should not, we must not, and I will not raise taxes,” before he raised taxes by $2.1 billion.

In fact, given all the Sturm und Drang over Walker’s successfully restricting public-employee collective bargaining, instead of outlawing public employee unions and their collective bargaining entirely, a Twitter follower of mine wondered if Walker shouldn’t have gone ahead and undone Gov. Gaylord Nelson’s bad idea completely, or in the alternative fired thousands of state employees. (Or both.)

While the right to belong to a union is generally recognized in the U.S. Constitution, collective bargaining is not. Had Walker done what he should have done and permanently retired the likes of Martin Beil (pronounced “bile”), John Matthews and other leeches of taxpayer dollars, the screaming from the left would have been no worse than it is now. Consider that RecallScottWalker.com was registered Nov. 2, 2010. What happened Nov. 2, 2010? Walker was elected. So on the day voters chose Walker and a wave of Republicans, the efforts were under way to undo the election, two months before Walker was inaugurated.

5 thoughts on “Unions vs. the facts, part deux”