It was Saturday morning and MSNBC’s Tiffany Cross had a bee in her bonnet. With Senator Lindsey Graham predicting riots in the streets, with Donald Trump reacting to the FBI raid on his home like the Archduke Ferdinand had just been offed, Cross told her audience, “These days, it feels like we are not just at the brink of a civil war, but that one has already begun.”

Six months ago, here’s how I would have responded to Cross: of course this is what a hyper-partisan MSNBC host would say. Civil war fears are really just LARPing by Twitter elites who thrive on hatred of the other side and so assume everyone else must too. “WE’RE GOING IN!” screams Elie Mystal as he screeches up in a Power Wheels Jeep while waving around a purple and orange Nerf Kalashnikov. The chaos is mostly imagined and we should treat it as such.

Six months ago, that’s what I would have said. These days, I’m not so sure.

There has been chatter about a second American civil war since approximately the first civil war, and mostly among conservatives. They’ve watched the left grow entrenched and imperialistic, imposing its inclusion ideology in schools, telling Trump supporters to leave blue states — and wondered whether there’s any hope for mediation. Trump, meanwhile, has as usual been stirring the pot until his rotator cuff goes flying off. And there has been real violence: the scrum in Charlottesville, the riots after George Floyd was killed, clashes in the streets between Proud Boys and Antifa, January 6.

The late political thinker Angelo Codevilla called this “a cold civil war,” and it seemed only a matter of time until it burned hot. Yet there was always an objection to be had here, namely that a cold civil war translated into American is just “politics.” This is not Scandinavia. Political debate here has always been a full-contact sport. Even the sainted 1990s, remembered today as a more innocent time, saw the infamous Waco raid, the Oklahoma City bombing, and a president accused of everything from perjury (yep) to rape (probably) to murder (that’s a negative, chief).

Why should today be any different? If anything, talk of a civil war seems like a kind of presentism, a sense of hysteria about the here and now unmoored from any historical context. Besides, aren’t we, as my friend Michael Davis has observed, too fat to fight a civil war? Don’t we have too many Insta accounts to maintain to possibly find the time to start butchering each other en masse? Bread and circuses are supposed to be a bad thing, but if they stop us from killing, then kick off NFL season early, say I.

The problem is that lately more omens have been appearing. For one, a new YouGov poll finds that 43 percent of Americans think it’s likely there will be a civil war in the next ten years. Clearly this isn’t just a bugaboo of overcaffeinated elites. For another, a Washington Post poll finds that only 62 percent say political violence is never justified, a record low, down from 90 percent in the 1990s. So while American politics has often been fraught, today it is unusually fraught, perhaps even the most fraught it’s been since the 1850s (as some historians maintain).

For another, thanks to the latest political drama, you can now see how such a conflict might begin. The Justice Department decides to indict Donald Trump over his Florida documents caper. The left, being the left, insists that he’s a perp walked in front of the cameras. The images rile up his most dedicated supporters who warn of a poisoned justice system, a rogue FBI, an entire federal government under enemy occupation. A few at the fringe decide it’s time to refresh the tree of liberty. The government responds with force of its own. And off we go. 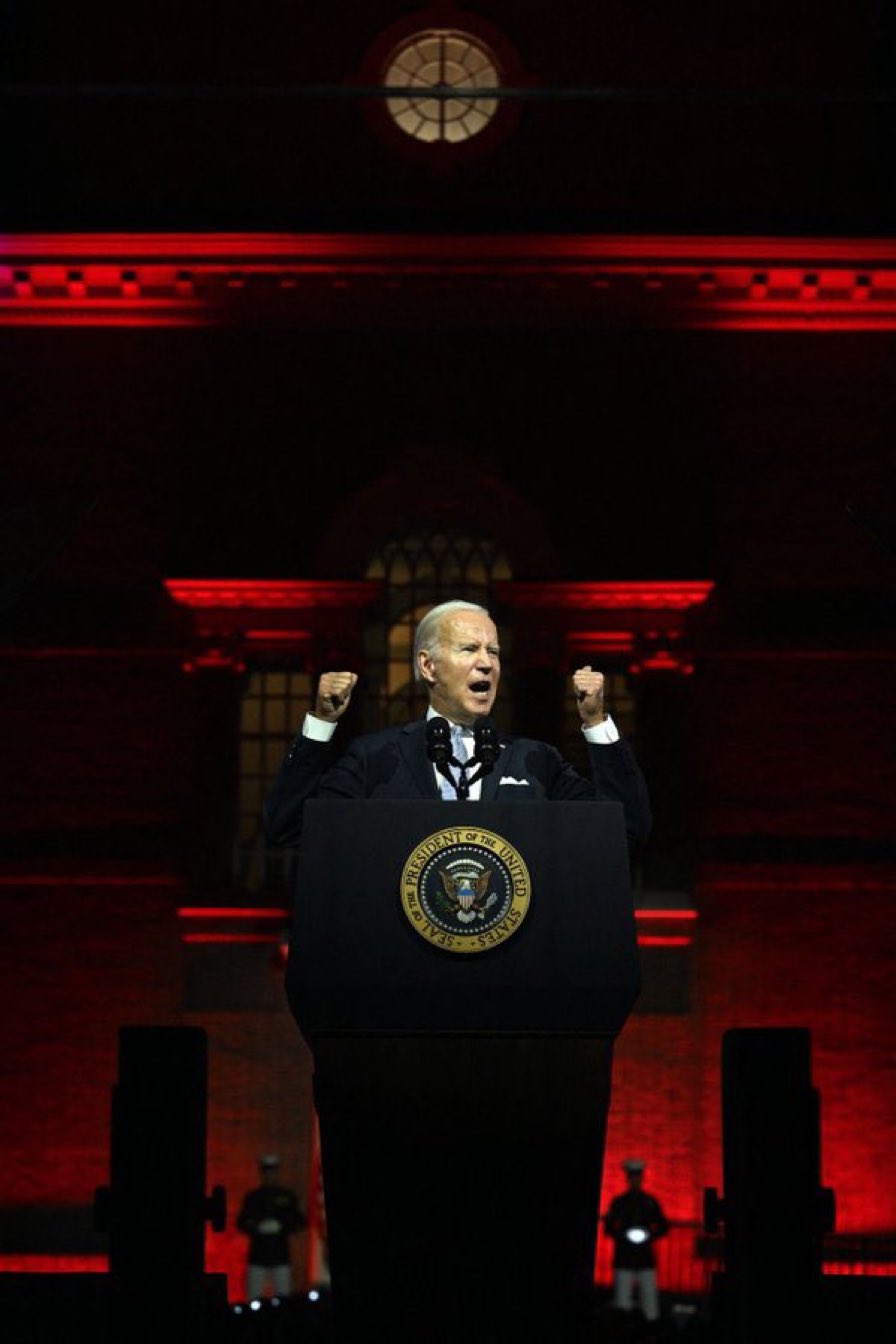 Yet the most worrying sign of all was Joe Biden’s speech last week. Broadcast from the deck of a Star Destroyer or wherever the hell he was, much has been made about its ludicrous backdrop — the silhouetted Marines, the red glow. And surely there are no accidents in American politics, not in this age where every politician employs a battalion of image consultants. The imagery was intentional, a message to Republicans: you’re worried about a tyrannical government? Keep going and you’ll get one. That plus the language he used (MAGA is “a threat to this country”) made this not just a tough speech but a martial one.

The import of this can’t be understated: here was an escalation by the most powerful man on earth. Biden just contributed his own chapter to the civil war narrative.

So are we doomed to civil conflict? Over Labor Day weekend, I had the chance to visit family in a small town in Pennsylvania. Their neighborhood is on the up and up, with new houses being built and new families moving in, including a striking number of immigrants from Nepal. The kids play in the streets, chasing each other and riding bikes, while the adults chat, amiably discussing the culture divide: why do the Nepalese cook in their garages anyway? Amid all the friendliness, you can’t help but notice something: these people are not bludgeoning each other to death over the classification stamps on folders at Mar-a-Lago. They aren’t even impaling each other over the systemic racism of Hulu user settings.

Experiences like this can make you squint: is this picture of Americana the real world? Or is the very-online darkness slowly bleeding even into the most tranquil of scenes? There is, after all, all the difference in the world between telling a pollster there could be a civil war and actually fighting one. All we can do is put our hope in what remains so good about this country, even if the unthinkable seems more plausible than it should.