Ben Shapiro may have coined the term “Joecession” in his podcast last week.

Fortunately we know how to deal with economic recessions, as Bruce Yandle points out:

Skyrocketing inflation, a historic Fed interest rate hike, rock-bottom unemployment, employers begging for workers—and just about everyone else scared to see what the stock market has in store tomorrow. It’s unclear whether the economy is just suffering from a case of monetary and fiscal policy indigestion or if something deeper is going on.

Can the Fed thread the needle and gear down the economy to cool inflation while avoiding a recession calamity? Will its 75-basis-point interest-rate increase provide any relief? Or has America’s free market economy become so bruised by constant political tinkering that it cannot respond predictably to yet another change in monetary policy?

When looking for feasible answers to these questions, our political leaders place the blame elsewhere and point to things outside of their immediate control. These excuses include uncertain recoveries from past recessions, COVID-19 shutdowns, supply chain breakups that require time to heal, and a war-loving Russian president’s invasion that has disrupted one of the world’s major energy filling stations.

While each of these scenarios does contribute to economic chaos, decisions by past and present administrations—including Barack Obama’s, Donald Trump’s, and Joe Biden’s—to subsidize economic sectors and to deposit freshly printed money into taxpayers’ bank accounts are perhaps most responsible.

After unleashing trillions of stimulus dollars that chase a limited supply of goods, services, and travel opportunities and drive prices up, our political leaders doubled down. They produced, defended, and left intact regulations, tariffs, and subsidies that raise protective walls around America and offer special benefits to important interest groups.

Let’s consider the Federal Reserve data comparing the year-over-year growth in the S&P 500 stock market index and the all-items Consumer Price Index (CPI) produced monthly by the Bureau of Labor Statistics to track inflation. Starting in early 2020, the data indicate that the stock market was recovering following the COVID-induced recession alongside very low levels of inflation. 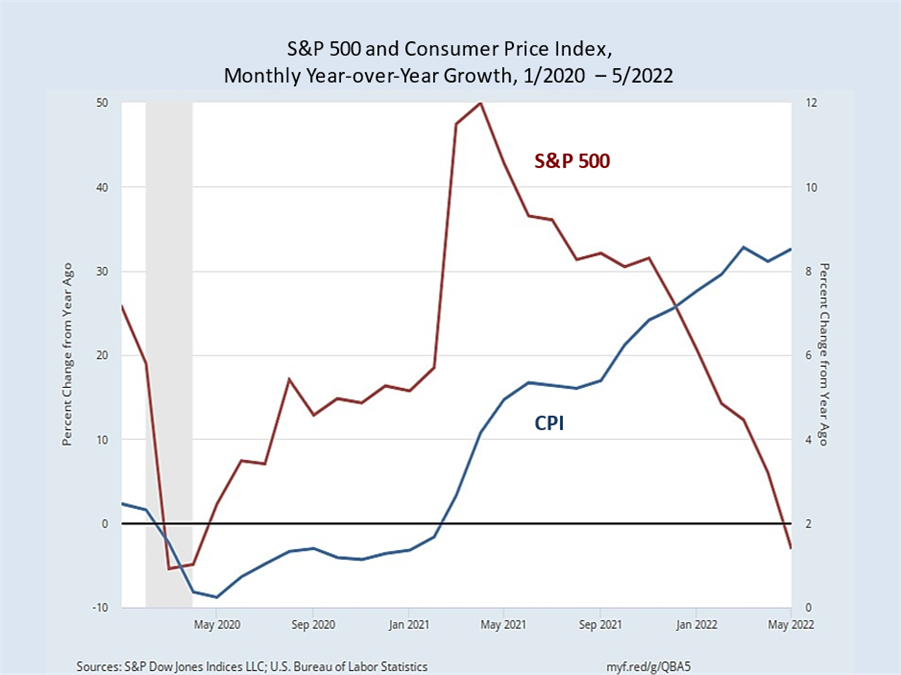 But around February 2021, the S&P exploded as stimulus checks and other money made their way into the market. The CPI began to show higher inflation as consumers spent more.

Recently, the S&P’s growth stumbled as stimulus activity slowed and the Fed began to talk about raising interest rates. Inflation, which lags behind the stimulus money, continued skyward even as the S&P—weighed down by higher rates and since-justified fears of even higher ones—headed toward negative territory.

The economy is running entirely too hot, but there are still viable ways to cool it off. A situation like this is not novel. As unlikely as it may seem at the moment, breaking the economy’s fever will require national leadership with a clear, principles-based vision. Those who think less in terms of politics and more in terms of real-world outcomes know what can happen when restrictions on trade and economic activity are reduced or made more flexible, when property rights are protected, when the tax disparity between what one produces and what one gets to keep is made smaller, and when the actions of monetary authorities clearly and closely reflect the relationship between money and the economy.

It wasn’t all that long ago that both former presidents Ronald Reagan and Bill Clinton chose to reduce the economy’s size, scope, and temperature to more bearable levels. The record achieved by their inspired changes speaks for itself: low inflation, sound GDP, and employment growth. Yes, between inflation, a swooning stock market, wondering what the Fed will do next, and the dread that comes with filling your gas tank—there’s plenty to worry about. But if we only focus on these financial measurables, we lose sight of a still-productive economy where people go to work each day and produce real goods and services that we all welcome and enjoy. Until very recently, we’ve been enjoying strong GDP growth and a labor market recovery that has left us with abnormally low levels of unemployment.

Our economic engine is strong enough to weather difficult policy changes, so long as they’re wise ones. Past policy actions have flooded this stout engine with too much money. The Fed will try and bring money supply growth in line with the growth of the real economy because keeping this balance is important. For now, let’s temper our anxiety by remembering that we will once again enjoy prosperous times. And by viewing our current economic woes as a lesson, we may avoid another battle with inflation in the future.