Based on research from the Congressional Budget Office, I’ve shared estimates of the potential economic damage from the fiscal plan Joe Biden unveiled last year.

But now he has a new budget. So what if we simply focus on the tax portion of that plan and ignore all the new spending?

The Tax Foundation has crunched the numbers from Biden’s tax agenda and has published some very sobering numbers about this latest version of the President’s class-warfare proposals.

What caught my attention was this chart showing the United States (light-blue bars) already is out of whack with major competitors and trading partners (green bars) – and Joe Biden wants to make a bad situation much worse (red bars). 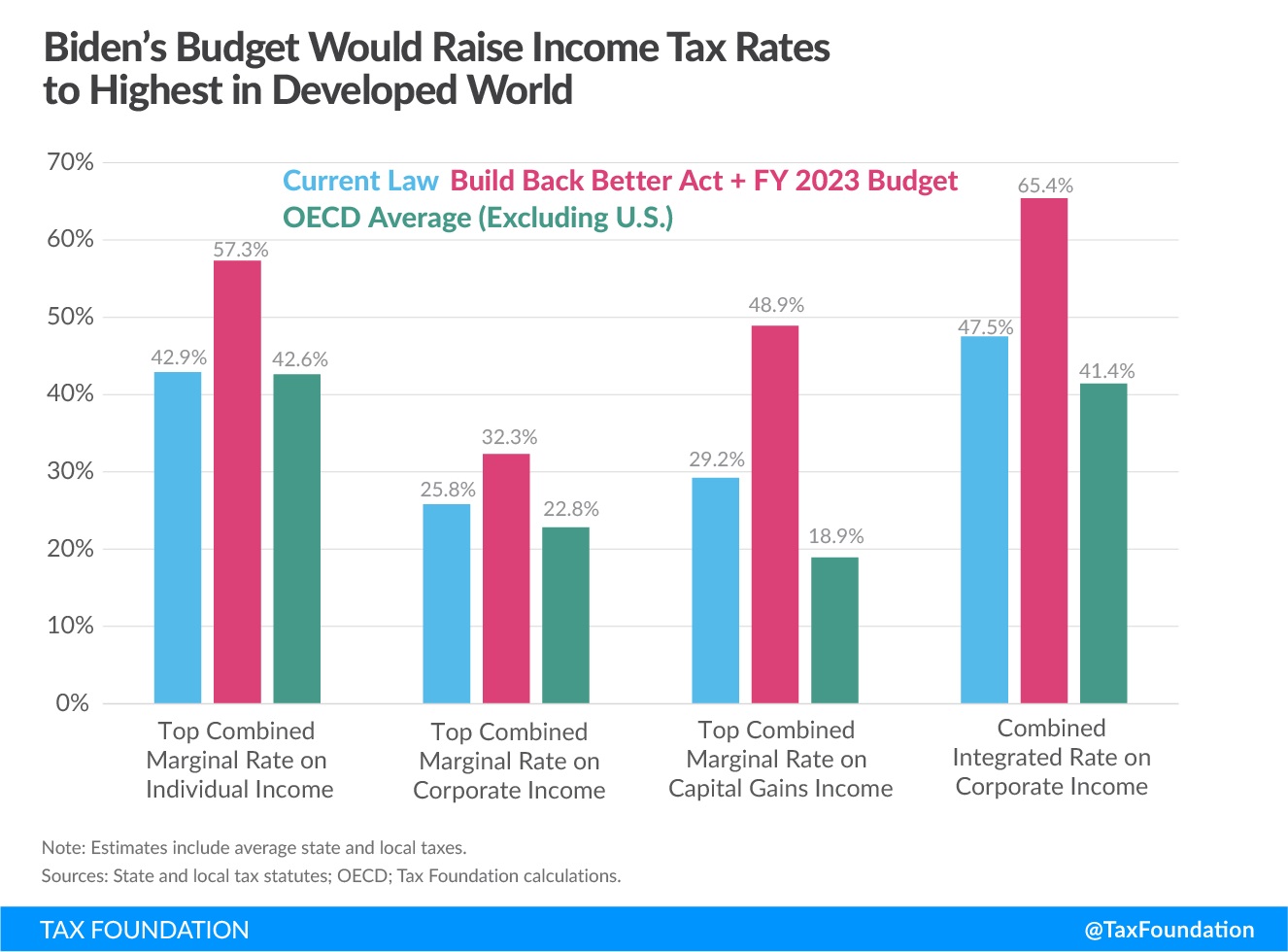 And when I write “out of whack,” that’s not an idle statement.

it turns out that the United States would have the highest income tax rates in the world.

…the tax increases in the Build Back Better Act (BBBA)…would raise revenues by $4 trillion on a gross basis over the next decade. The Biden tax increases in the budget and BBBA would come at the cost of economic growth, harming investment incentives and productive capacity… The budget proposes several new tax increases on high-income individuals and businesses, which combined with the BBBA would give the U.S. the highest top tax rates on individual and corporate income in the developed world… Taxing capital gains at ordinary income tax rates would bring the combined top marginal rate in the U.S. to 48.9 percent, up from 29.2 percent under current law and well-above the OECD average of 18.9 percent. …Raising the corporate income tax rate to 28 percent would once again bring the U.S. near the top of the OECD at a combined rate of 32.3 percent, versus 25.8 percent under current law and an OECD average (excluding the U.S.) of 22.8 percent.

The good news, relatively speaking, is that the United States would not have the highest aggregate tax burden (taxes as a share of economic output).

And the U.S. would not have the highest tax burden on consumption (no value-added tax in America, fortunately).

But with all of Biden’s new spending (along with the built-in expansions of government that already have been legislated), it may just be a matter of time before the U.S. copies those features of Europe’s stagnant welfare states.

The net result is lower living standards for the American people. The only open question is how far we drop.

Anyone who votes for any Democrat deserves everything bad that happens to them. Unfortunately the rest of us do not but will suffer as we are now.