Let’s see the mainstream media try to spin this news favorably for the Biden (mis)administration, as reported by National Review:

Inflation increased at the fastest rate in 40 years over the last twelve months, outpacing projections, the U.S. Department of Labor announced Thursday.

Core CPI, which excludes volatile food and energy costs, also went up by 0.6 percent in January, following another 0.6 percent increase in December. This marks the seventh time in the ten months that it has increased at least 0.5 percent. The Core CPI increased by 6.0 percent annually, the steepest 12-month jump since
the period ending August 1982.

Food, electricity, and shelter contributed the most to the seasonally adjusted all items increase. Energy prices picked up 0.9 percent for the month, with rising electricity costs being somewhat offset by declines in gasoline and natural gas costs.

The persistent inflation, exacerbated by a supply chain crisis marked by production bottlenecks and shipping delays, has prompted the Federal Reserve to switch strategy. Starting in March, Fed Chair Jerome Powell recently indicated, the central bank could start to reverse its accommodative monetary policy and hike interest rates to curb spiraling inflation. The Fed is also likely to start unloading its gigantic balance sheet and roll back the pace of its large scale asset purchases that have been injecting stimulus into the economy for years. 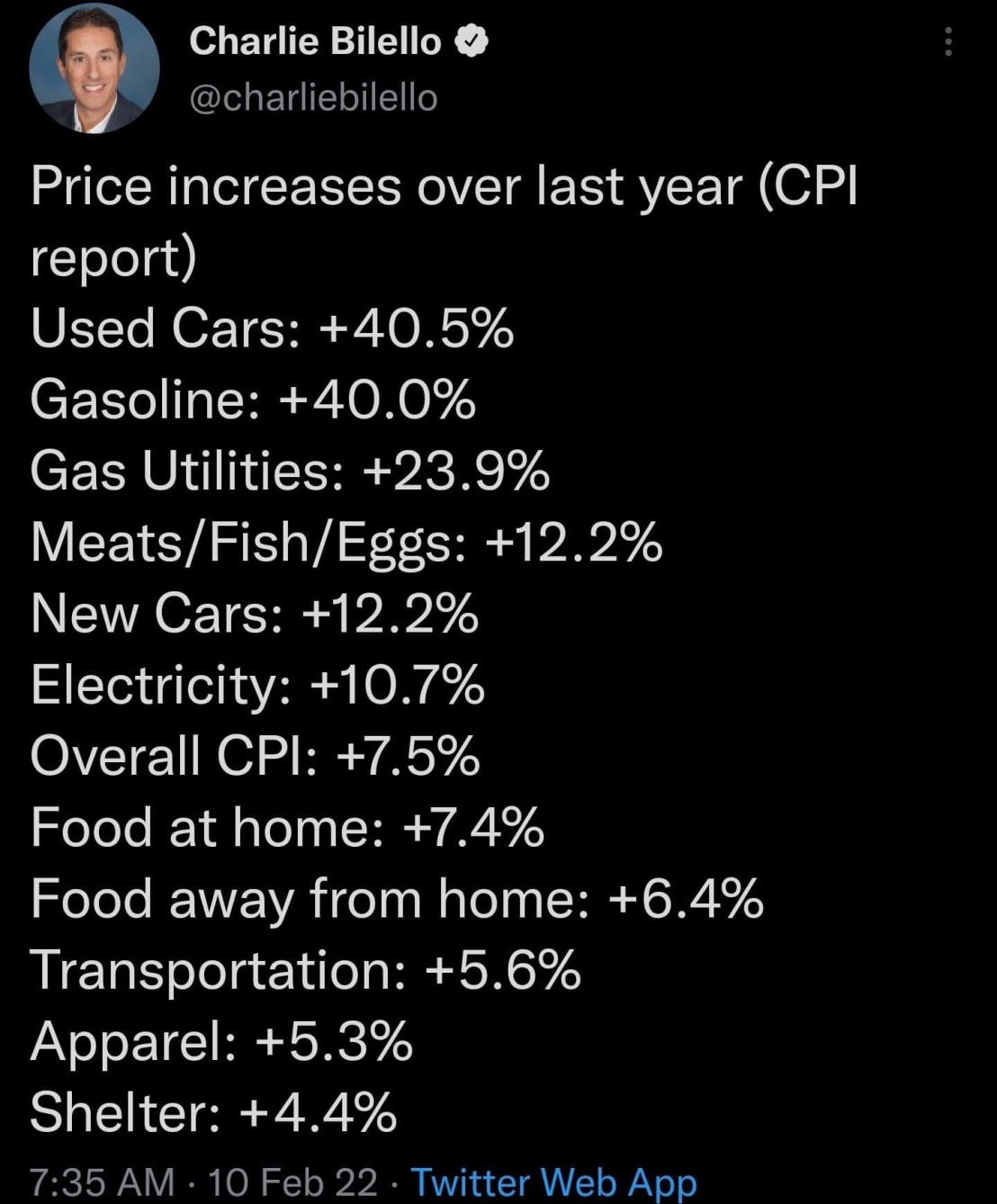 This is what we get when the Federal Reserve jacks up the M2 money supply by about 40% in two years and ignores Milton Friedman.  Consumer prices rose 0.6% in January, pushing the 12-month increase to 7.5%, the largest in 40 years. Prices have shown no sign of slowing down too, up at an even faster 8.0% annualized pace in the last 3 months, and marked the fifth month in a row where it has beaten the consensus expected forecast. Inflation was broad-based in January, with shelter, electricity, and food leading the way. Housing rents (rents for both actual tenants and the rental value of owner-occupied homes) accelerated in January, rising 0.5% for the month, and accounting for nearly a quarter of the overall increase. Rents are important to watch now that a national eviction moratorium has ended and home prices are up a blistering 29% since COVID started.  For some perspective, housing rents are up only 5.3% in that same timeframe.  Rents make up more than 30% of the overall CPI, so we expect it to be a key driver for inflation in 2022 and the years to come.  Meanwhile, energy prices rose 0.9% in January, driven by a 4.2% increase for electricity, which more than offset price declines for gasoline and natural gas (-0.8% and -0.5%, respectively). Food prices also increased 0.9%, on the backs of higher costs for nearly every major grocery store food group.  Stripping out the volatile food and energy components, “core” prices rose 0.6% for the month and are up 6.0% in the past year, which is also another multi-decade high. It’s important to recognize the inflation experienced today is not merely a rebound from the steep price declines in 2020 when COVID first hit the US; consumer prices are up at a 4.5% annual rate since February 2020 and core prices are up 3.7%, both well above the Fed’s long-term inflation target of 2.0%. This inflation has never been transitory, and it appears the Fed has finally reached the same conclusion, as it’s signaled a readiness for multiple rate hikes in 2022. The bad news is the Fed is very late to the party. As the massive 40% increase in the money supply continues to gain traction, inflation will be a key indicator to watch in 2022.

Economic growth does not cause inflation. Inflation is never a sign of a strong economy.

Yesterday it announced adjusted weighting of the 100 categories of consumer spending that roll up to the Consumer Price Index and core inflation (excluding food and energy) numbers, and analysts expected a similar WTF as last weeks jobs print.

In other words, this is the best they could do. The Fed will have little choice now but to raise interest rates, and for all of us old duffers pining for the good old days, we will get to relive them. We were thinking more about the music, muscle cars, and our mobility and relative good looks, but those (alas) are not components of CPI.

Therefore, inflation is actually worse than the feds are telling you.  Congratulations, Biden voters; like the disastrous Afghanistan pullout, this is all on you.
Advertisement