The Green Bay Packers on Thursday introduced their new, history-inspired third uniform: the 50s Classic Uniform. The new uniforms will debut at Lambeau Field on Oct. 24 against Washington.

The 50s Classic Uniform is inspired by the team’s uniforms from 1950-1953, which was the second time the team wore green and gold in its history. The Packers first wore green in the mid-to-late 1930s.

The uniforms are all green, with gold numbers and stripes similar to the jerseys worn in the 1950s. In those days, the green was a Kelly green and the team alternated between wearing it with green or gold pants. This alternate jersey, which is the Packers’ traditional green color, with gold numbers and stripes, will be worn with matching green pants with gold stripes, and matching green socks.

“The 1950s were one of the most interesting times in our organization’s rich history, creating the bridge between two of the greatest eras in pro football,” said Packers President/CEO Mark Murphy. “With the NFL growing rapidly, this time period set the stage for the construction of Lambeau Field and for the team’s success in the 1960s and beyond. We hope our fans enjoy celebrating our history with this new alternate uniform.”

First: How does it look? 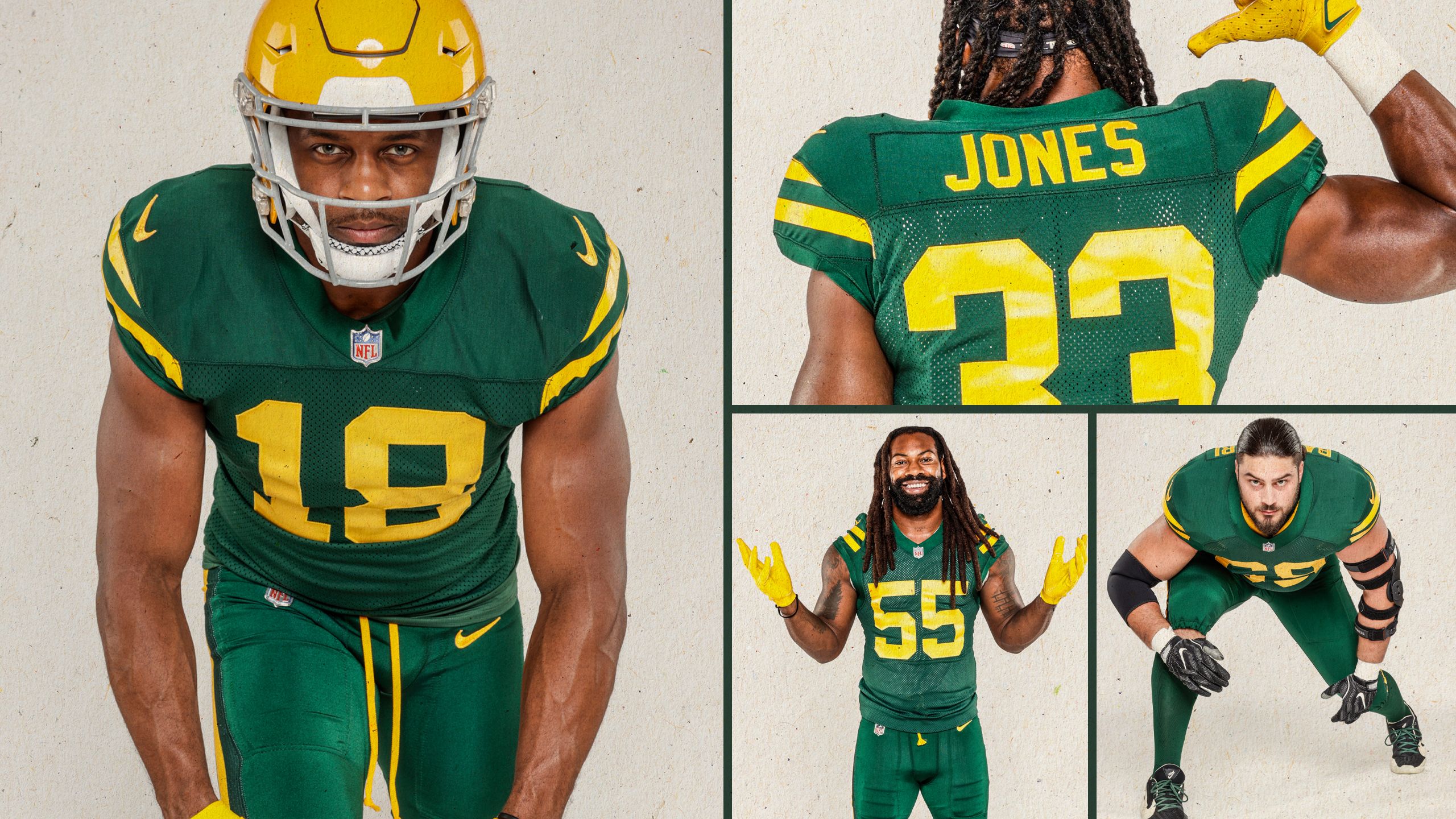 This new uniform is based on this old uniform … 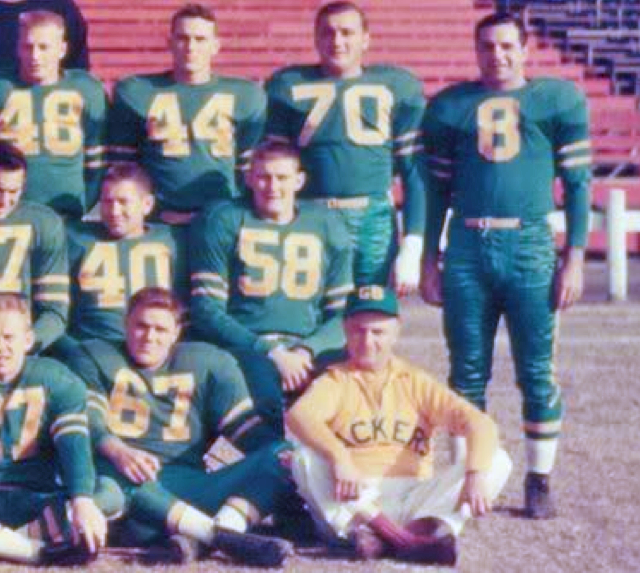 … which, though the new uniforms are forest green, not the kelly green of the earlier uniforms …
… makes it a departure from the Packers’ previous throwbacks that were based on their navy-blue-and-gold days from founder (and one-year Notre Dame student) Curly Lambeau. 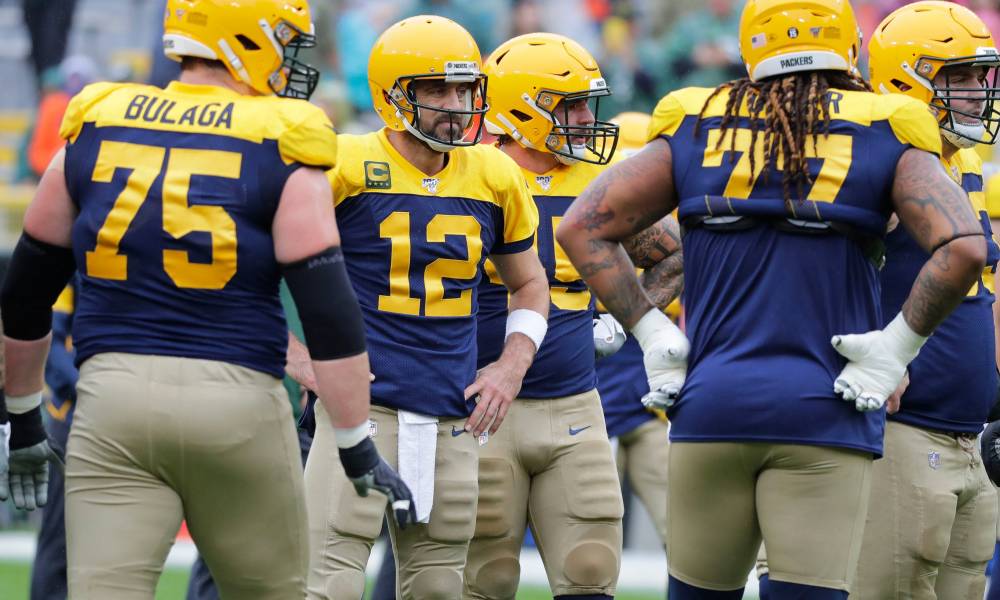 Once the Packers unveiled green uniforms in 1935 … … they went back and forth between blue and green until Vince Lombardi said the Packers were the GREEN Bay Packers and would remain as such. 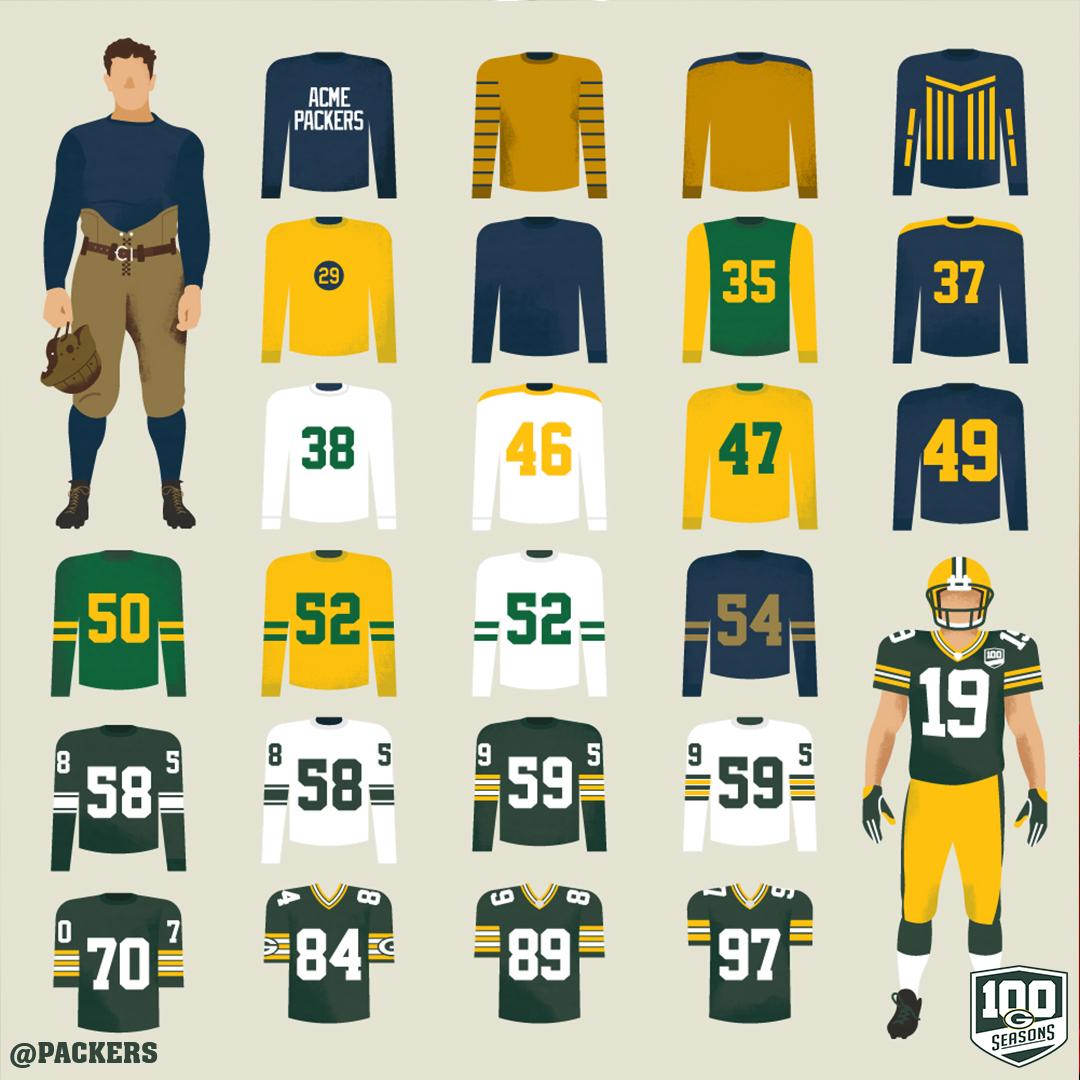 As someone who hates the Blue Bay Packers look, not to mention the White Bay Packers look (for the Nike-mandated Color Rush, though white isn’t really a color for purposes of clothing), I believe these are superior for that reason alone, though I am not usually a fan of monochrome uniforms. The Packers should, in fact, redesign their road look to replace the gold pants with green pants when wearing the white jersey.

I assert this (because I’m always right in this blog, and if you agree with me you’re right too) as someone who is not necessarily enamored with the green and gold look — specifically the “gold” part, which is more accurately described as “athletic gold” or “yellowgold,” basically a little bit darker than yellow. During the early 1950s apparently the Packers used a more metallic look …

… which is preferable to me from their current yellowgold. 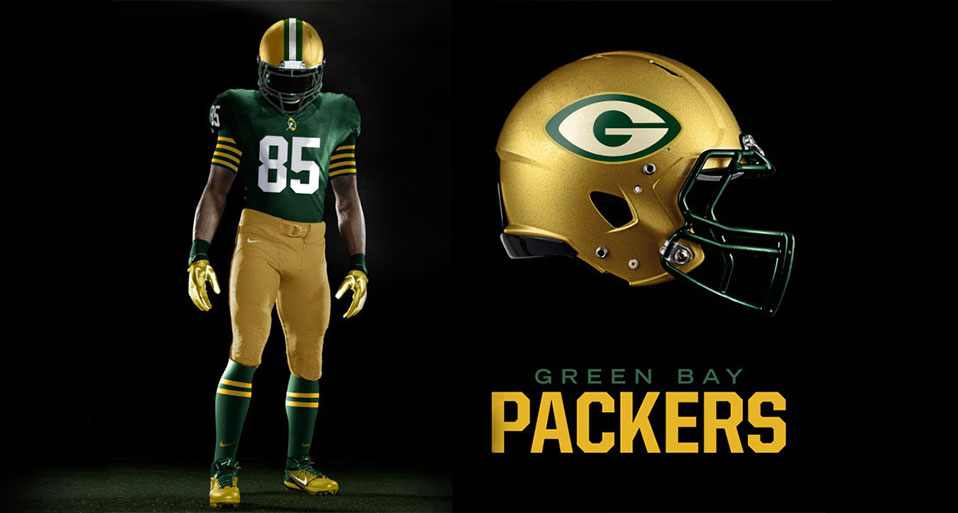 (A Twin Cities sportswriter once described the Packers’ look as lemon and spinach. I have no problem with either description, but the writer should have included the Vikings colors — bruises and pus.)Other than the monochrome look, I have another issue:

While the early 1950s were not a particularly successful time for the Packers on the field, it was the dawn of an extraordinarily eventful decade off the field, a decade that began with the departure of the team’s founder Curly Lambeau and ended with the arrival of Vince Lombardi. In the 1950s, the NFL was growing quickly and gaining nationwide interest through television exposure. The Packers organization was at a turning point and a franchise-saving stock sale helped lay the groundwork for the eventual construction of Lambeau Field and set up the team to stay in Green Bay through modern times.

The first two seasons of green ended with the Packers’ 1937 title. The four seasons of the 1950–53 look that the Packers will debut against the don’t-call-them-Redskins-anymore were 3–9, 3–9, 6–6 and 2–9–1, which seems an era not worth commemorating. The rule of caring about how your team looks is that quality of look and quality of play are inextricably linked.