For instance, my parents’ listening to two “beautiful music” FM stations in Madison while I was stuck in the back seat. Or the stereotypical my dog died/my girl left/my truck blew up/Mama’s in prison/let’s all get drunk of classic country music. This is why I like the design of the 1969–70 full-size Ford instrument panel. 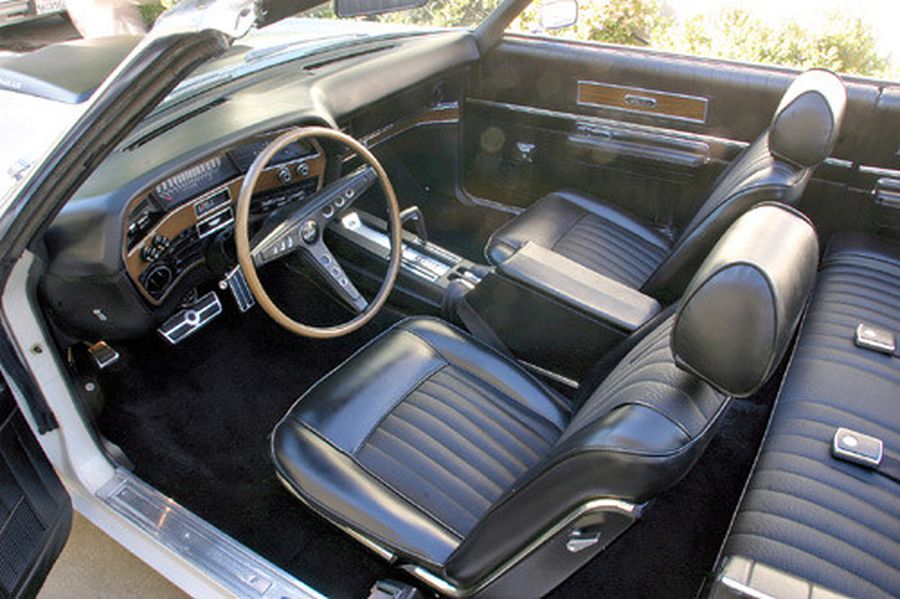 In some cases music is literally torture, if you believe Weird History:

The United States has a long and ear-splitting history of using audio torture on detainees and interrogation suspects. Although the use of loud music for interrogative purposes has been banned by the United Nations, the United States reportedly continued to use the technique for a number of years after 2001, claiming it didn’t qualify and only caused discomfort. That is until President Barack Obama banned the practice via executive order in 2009.

That being said, the American intelligence community has supposedly also found ways to use music that goes beyond simply pumping up the volume. These so-called CIA interrogation songs manage to cause suffering just based on their content alone.

Countless US black sites and secret prisons are rumored to be scattered across the globe, and in many of them, detainees reported experiencing aural torture without ever being charged with anything. Whether the music is played at an extreme volume, contains offensive material, or is simply annoying and played on a continuous loop, the method causes genuine psychological distress – just look at these popular torture songs for perspective.

While some may scoff at the idea of music being used for genuine torture, noting that parents often reference the phrase based on repeated plays of Barney’s theme song, the tactics reportedly used by the US government are a far cry from the annoyance caused by an earworm on loop.

Use of music as a means of getting information from an unwilling individual is effective for a number of reasons, but irony isn’t usually one of them. However, it came into play in the case of Panamanian dictator Manuel Noriega, who found himself barricaded in an embassy in Panama City on December 25, 1989, after the Americans entered the country and sought his detainment for various offenses.

Rather than taking Noriega by force, the troops surrounded the embassy and blasted rock music – including, of course, Van Halen’s “Panama.” Failing to see the humor in the situation, Noriega gave himself up on January 3, 1990. Other songs part of the US’s “Operation Just Cause” reportedly included “All I Want Is You” by U2 and “I Fought the Law” by The Clash.

Britney Spears “Oops I Did It Again”

The music of Britney Spears has a way of worming itself into the brain of anyone who listens to it, and the US apparently used this incessant catchiness as a way to get to its enemies between 2001 and 2004. Songs by the singer were reportedly blasted at Guantánamo Bay detainees as part of an “advanced interrogation” campaign.

Repeatedly playing Spears proved so effective that other countries borrowed the technique. In 2013, the British Navy used “Oops!… I Did It Again” and “…Baby One More Time” to scare away Somalian pirates on the east coast of Africa.

Eminem’s occasionally shrill and frequently taunting voice has annoyed plenty of people in North America, so one can only imagine the effect his music would have on those completely unfamiliar with Western culture. According to detainee Benyam Mohammad, the CIA took this to the extreme in a secret detainment center in Kabul, Afghanistan.

In 2004, Mohammad said Eminem’s “The Real Slim Shady” was played loudly for 20 consecutive days, alongside songs by Dr. Dre. This led to people reacting very adversely and the incident was condemned by Human Rights Watch.

Nancy Sinatra “These Boots Are Made for Walkin'”

Music-based techniques aren’t exclusively used on foreign targets. On February 28, 1993, David Koresh and his Branch Davidians holed themselves up in a Texas compound after the ATF tried to raid their ranch, warrants for Koresh and some of his top leaders in hand. What followed was a 51-day standoff between the ATF and the Branch Davidians. The ATF used an array of techniques in an attempt to get Koresh and his followers to surrender, including musical psychological operations.

One of the most prominent tunes played during this time was Nancy Sinatra’s “These Boots Are Made For Walkin’.”

Most commercial jingles are designed to get stuck in the heads of listeners, and that’s certainly true for the Meow Mix jingle, which is as catchy as it is grating. While some may laugh at the use of such an innocent-sounding song in interrogations, investigative reporter Justine Sharrock noted, “You almost have to stop yourself from laughing because you realize this is actually torture.”

The jingle remains a favorite of the CIA. It is known as “futility music,” a tool used to “convince the source that resistance to questioning is futile. This engenders a feeling of hopelessness and helplessness on the part of the source,” according to the US Human Intelligence Collector Operations.

Some of the United States military’s auditory techniques went beyond trying to annoy or brainwash detainees and fell firmly under the category of “cultural” techniques. This was the case with the CIA’s musical theme, reportedly used in Guantánamo Bay in the early years in their campaign against terror.

This technique attempted to make detainees feel as if they were offending their faith, and included the use of Christina Aguilera’s provocative “Dirrty.” For the most devout prisoners, such a racy song amounted to an outright imposition on their personal beliefs and culture.

There are few people above the age of 5 who can handle hearing the theme song from Barney and Friends more than a handful of times. Perhaps it’s not surprising that “I Love You” was reportedly a standard auditory technique used during the US-led invasion in the Middle East after 9/11.

Not only is the song annoying, but it contains a message of family and togetherness – a reminder for detainees that they may never see their own families again. In fact, “I Love You” is so effective that the United States regularly uses it for the training of its own operatives, making them listen to it on a 45-minute loop to toughen up their resistance to such techniques.

Many non-Western audiences are relatively unfamiliar with heavy metal music, and US military and intelligence agencies have used this fact to shock and appall detainees with the loud, harsh, and aggressive genre.

One of the most popular examples is “Bodies” by Drowning Pool, one of the more popular choices for audio interrogation used at Guantánamo Bay in 2003. This didn’t stop Guantánamo officials from inviting the band to play a live show at the base on the Fourth of July in 2017.

Bruce Springsteen “Born in the USA”

Some consider “Born in the USA” by Bruce Springsteen to be an ode to the Land of the Free, but those who are more familiar with the lyrics know the song is actually a harsh condemnation of the country’s culture and treatment of its own people.

Of course, this subtle message was probably lost on the employees of Guantánamo Bay, where the song was reportedly used as an unofficial wakeup call each day and was often blasted through the loudspeakers during traditional prayer times.

You’d think Springsteen’s singing any words with the kidney-stone-passing style here would be torture enough.