James Wigderson on the waste of time that is the Democratic “National” “Convention” in Milwaukee:

President Donald Trump will be in Oshkosh on Monday. Eric Trump will visit the Milwaukee Police Association on Tuesday. Vice President Mike Pence will be in Darien on Wednesday.
Former Vice President Joe Biden will do his Max Headroom impression from Delaware on Thursday while his own party’s convention will be virtually meeting in Milwaukee. The only Democrats that will be here are the computer techs and television staff to run the convention that never was.
It’s to the point where, instead of sending reporters from the national networks to Milwaukee, the networks are probably contacting their sports departments looking for footage of Wisconsin that doesn’t have cows. “What’s that orange construction thing? Is that supposed to be art?”
Wisconsin will miss all of the revenue that the Democrats would have brought, as well as the unpaid bills and anarchist protesters smashing storefronts downtown. But since Milwaukee decided against using tear gas to control riots and fired the police chief, it’s probably a good thing that Biden remains in Delaware. It’s one thing to wear a small cloth mask with a campaign logo. But who wants to see a presidential candidate in a gas mask being escorted into a convention hall as rocks and bottles fly by?

Well, actually, I would, to demonstrate the urban failure that is Milwaukee and the empty suits that are Gov. Tony Evers and Milwaukee Mayor Tom Barrett.

“There is something about a national convention,” H. L. Mencken wrote in 1924, “that makes it as fascinating as a revival or a hanging.”
“It is vulgar, it is ugly, it is stupid, it is tedious, it is hard upon both the higher cerebral centers and the gluteus maximus, and yet it is somehow charming. One sits through long sessions wishing all the delegates and alternates were dead and in hell — and then suddenly there comes a show so gaudy and hilarious, so melodramatic and obscene, so unimaginably exhilarating and preposterous that one lives a gorgeous year in an hour.”
No one will describe the Democratic convention that opens today in Milwaukee that way. Instead, we get a “ghost convention.”
It’s odd, really, that the convention will be held in my hometown and that I won’t be going. But then, pretty much no one else will either. And, I have to say, that’s kind of sad. Milwaukee would have put on a pretty good party. Instead, there will be no beer-soaked parties, no funny hats, and I’ll probably spend the week at home, watching snippets on my laptop.
Frankly, I have no idea what it’s going to look like, or if anyone will pay attention to anything but the major speeches.
Of course, it’s been heading this way for years. The conventions have devolved from the gaudy show of Mencken’s experience to made-for-television pep rallies, to tightly scripted infomercials. So, this seems likely the inevitable outcome: a virtual convention that barely exists outside of its live stream.
The non-conventions of 2020 may mark the final dissolution of the anachronistic political burlesque shows, and the conventional wisdom will be that its about damn time. Which is too bad, because they used to be something.
The 1924 Democratic convention that Mencken sweated through took 103 ballots and 16 days to pick John W. Davis; the 1940 Republican convention improbably propelled Wendell Willkie to the presidential nomination; and there was the shambolic 1972 Democratic convention that left nominee George McGovern delivering his acceptance speech in the middle of the night. The 1980 Republican convention that nominated Ronald Reagan was convulsed by speculation that he might name former president Gerald Ford as his running mate (he chose George H.W. Bush instead). Barack Obama’s speech at the 2004 Democratic convention made him a national figure.
And, of course, there was the 1968 Democratic convention in Chicago, complete with a police riot, which I remember particularly well, because I was there.
My father was a delegate. I was a page. And I stole the Wisconsin delegation’s banner.
My father had been Eugene McCarthy’s Wisconsin campaign director in 1968.  A newspaper reporter once described him as having a “Runyonesque quality,”  a description that obviously delighted him. “Short, dark browed, puckish faced, he looks like the sort who might let you in confidentially through billing cigar smoke, on a sure winner in the fifth race.
“The real Jay Sykes is a tough-minded idealist, who took his share of gambles in McCarthy’s Wisconsin Odyssey but knew what the odds were from the beginning. ‘That’s why I went into it,’ he says with his wry grin. ‘I liked the odds. They were so prohibitive.'”

Here’s a picture from the floor of the convention. From left in the foreground are Wisconsin delegation chairman Donald Peterson, Louis Hansen and my dad. 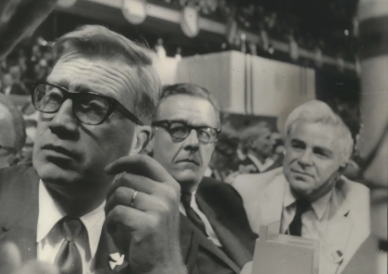 Afterward, he described the apocalyptic confrontation in Chicago as “akin to a Rotary club luncheon in the middle of World War I.”
“It wasn’t even disillusioning,” he says, “just disgusting and demeaning.” With the outcome preordained, he said, “it was just a matter of going through a symbolic act, the playing out of a drama.” He’d really had enough of conventions. In his papers, I found this clipping: 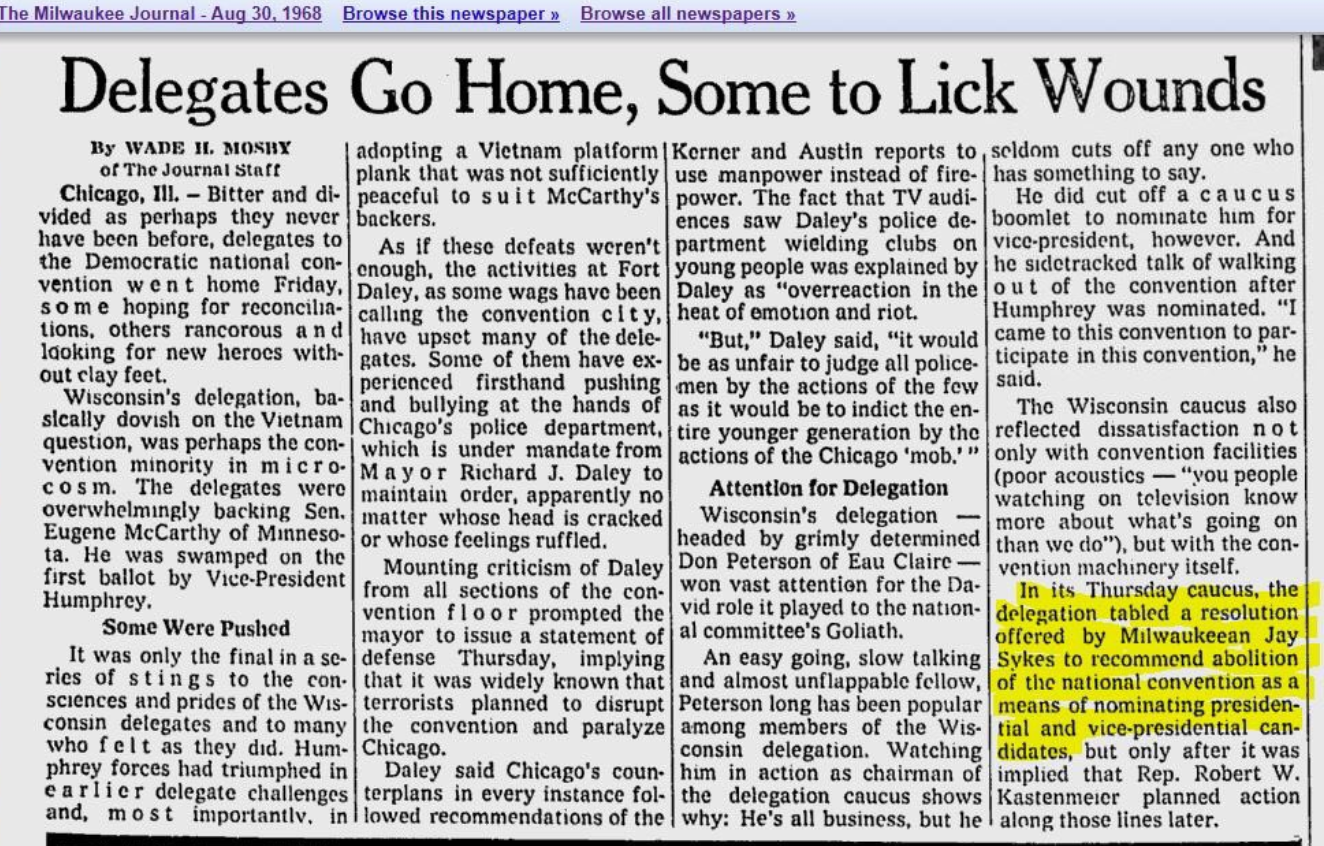 “In its Thursday caucus, the delegation tabled a resolution offered by Milwaukeean Jay Sykes to recommend abolition of the national convention as  means of nominating presidential and vice presidential candidates….”

Going through these old pictures and clippings is an odd experience. The convention was 52 years ago, and I was there as a teenager. But as I look at the pictures I find that I can run my finger along the faces of the Wisconsin delegation and name one after another. It’s strange how much in your life you can forget, and what things stick with you. For me, 1968 has always felt the central story in the plot, and everything else has been gloss.

Here you can see the Wisconsin banner in the background. On the last day of the convention, I ran across the floor and grabbed it, managing not merely to snag it, but to somehow get it all the way back home. For years it sat in our garage as a personal piece of history. One by one the letters fell off and the cardboard sign disintegrated. It’s too late to regret the carelessness on my youth. 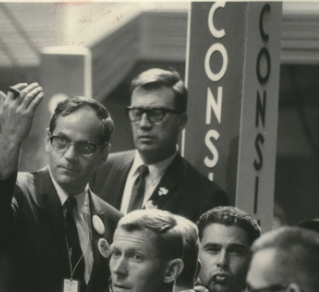 Imagine a four-day Zoom meeting in which the likes of John Kasich, Michael Bloomberg, and Nancy Pelosi warn us for the fifty through sixty millionth times about the “existential threat” of Donald Trump, and one comes close to envisioning both hell on earth and what we’re all in for this week with the Democratic Party’s Biden/Harris virtual coronation.

The alternative is to start drinking early.

The 2020 DNC represents the culmination of one of the most exhausting, repetitive, and depressing primary races America has seen. It was extreme both by number of candidates – the official count seems to be 29 – and by sheer quantity of identical-sounding rhetoric. The race from the start was itself like a giant drinking game, in which candidates were rewarded in polls for delivering the most pleasing versions of oft-repeated terms like “kids in cages,” “fascist,” “white supremacy,” and “this is not who we are.”

The stretch run of the primary, a clash between centrist Joe Biden and reform-minded Bernie Sanders that ostensibly represented a serious ideological split within the party, essentially came down to a battle of talking points, i.e. “this president” versus “corporations.”

“This president” ended up winning, and the upcoming DNC will reflect the relentless Trump-centric strategy of the victors (the same strategy the party deployed four years ago). It will be light on policy and heavy on market-tested barbs about Trumpian perfidy. A year ago, we’d have been drinking most to terms like “Ukraine” or “rule of law”; this year, it’ll be “post office” and “birtherism” (take two shots for creative variations like “neo-birtherism” or “birtherism redux”).

One point makes me nervous. This convention could obliterate the boozing public with a single word, previewed in about a thousand headlines when Kamala Harris was named Biden’s running mate last week:

Why Kamala Harris is a historic VP pick for Joe Biden

Turn on your TV to CNN or MSNBC right now. The odds aren’t bad – I’d put them at 7-2 – that the word “historic” is in the chryon. You will hear this word five thousand times, at minimum, per day of convention coverage. Out of respect for human life, you’ll therefore be asked to drink to “history” or “historic” only when uttered by actual convention speakers. I hope readers understand, without it being included on the list, that any mention of “Malarkey” is an automatic drink. …

Without further ado, drink EVERY TIME to:

Drink ONCE PER HOUR to:

BONUS RULE: Drink every time someone blames Trump for coronavirus deaths. Make your own group judgment as to whether or not the blame is deserved.

WOKE MAD LIBS EXCEPTION: If an MSNBC commentator or a speaker uses any of the following terms, you may stop drinking for an hour to “reclaim” your sobriety: performative, white-adjacent, Latinx, decolonize, invisibilize, interrogate, normalize, privilege (as a verb), dismantle, erase, lived experience, heteronormative, habitus, cultural appropriation, essentialist, or trigger.

Genderfuck or melanated ends the game.

I’ll tune in for the first and last nights of the convention only, and make MSNBC the official medium, updating with slightly tweaked rules for the Biden speech.

See you in hell.