Today was supposed to be the start (not counting the First Four games earlier this week) the NCAA men’s Division I basketball tournament.

ESPN’s Erin Barney and Seth Walder write about the March Madness that could have happened:

Oh, what could have been.

When the NCAA Tournament was called off due to the COVID-19 pandemic, ESPN’s Joe Lunardi released his final seeding and first-round matchups for the tournament anyway, and Badger fans got the bittersweet news that Wisconsin, according to Lunardi, would have been a No. 4 seed–the highest No. 4 seed, in fact.

ESPN has now taken things a step further and used its Basketball Power Index (BPI) to predict the outcome of each game all the way through to the championship round.
Their simulation, which considers “the relative strength of the two teams and the location of the game” for every single game in the bracket predicted that…Badger fans, brace yourselves … WISCONSIN could have been crowned NCAA champions, beating out No. 6 BYU for the rights to hang a banner in the Kohl Center.

ESPN’s Seth Walder, who put this exercise together, explained in his article that normally, BPI is used to provide probabilities of multiple scenarios.

“But here’s the thing,” Walder wrote. “Life is a single sim. The 2020 tournament was only going to be played once. And so that’s what this article is actually dedicated to: a solitary simulation of this year’s tournament. One-and-done, just like March Madness.”

The simulations resulted from a BPI run also don’t provide context, details, for how the wins or losses might have gone down, so in his article, Walder took some creative liberties.

The Badgers’ path to the trophy game, per this BPI simulation, involved crossovers with Marquette, Duke, Maryland, and more. Here’s a look at what could have been, according to Walder:

MIDWEST REGION ROUND ONE

Just in terms of regular ol’ net efficiency, Iowa had the 24th-best offense in the country. But once we adjust for opponent and account for the tough Big Ten in which the Hawkeyes had to battle, it was the fifth-most efficient offense. And that’s what leads them to a blowout win in the first round of the tournament.

As you can see from the championship projections, BPI was awfully high on Duke this season relative to general perception. Will that result in a championship in Sim No. 2020? It remains to be seen, but it did carry the Blue Devils to a first-round victory.

No. 7 Providence over No. 10 Arizona State

In a back-and-forth affair, Nate Watson‘s dominance inside against Providence’s Pac-12 opponent leads the Friars to a victory.

No. 2 Kentucky over No. 15 North Dakota State

Kentucky was maybe slightly overseeded as a No. 2 seed from a résumé standpoint — strength of record would have put the Wildcats at a No. 3 seed — but vastly overseeded from an ability standpoint as the 24th-best team in the country, per BPI. It’s irrelevant now — they beat North Dakota State just fine — but will it matter down the line?

Our first upset! Had Selection Sunday actually happened, I would have spent this entire week yelling from the rooftops that Liberty was an excellent underdog to pick. I promise, I would have! After all, we identified the Flames as the second-best 11-plus seed in terms of first-round upset potential a week ago, shortly before the actual tournament was canceled.

Both of these teams are among the 16-slowest pace squads in the country, but Wisconsin’s decent offense is a mismatch against a weak North Texas offense. The Badgers gradually extend their lead over the course of the game, which is never really in doubt.

No. 9 Marquette over No. 8 Houston

Marquette finished the season ice cold, with six losses in its final seven contests. But the Golden Eagles can take solace in the fact that BPI does not overreact to recency in college basketball. And they also have this going for them: Markus Howard. And on this day against Houston, Howard finally gets his first NCAA tournament win. Will there be more?

A sloppy first half from Kansas draws some early concern, but the Jayhawks recover and pull away for the expected win.

Vernon Carey Jr., the most productive player in college basketball this season on a per minute basis according to our win shares metric, leads the Blue Devils into the Sweet 16. And Duke is now a clear favorite to come out of the region because …

No. 7 Providence over No. 2 Kentucky

Another blue blood down in this pretty brutal Midwest region. Even though we think Kentucky is overseeded, the Wildcats are still almost three points per game better than Providence. That’s on average. Not today. Today, the Friars are moving on.

The Flames had their moment, but they won’t reach the second weekend. They hung tough with the Badgers and kept the scoring margin within single digits, but Greg Gard’s defense helped keep Liberty from ever making a late charge.

And Kansas falls! Markus Howard is flying now and he and Marquette are having the tournament that Golden Eagles fans hoped for a year ago. And just like that: Udoka Azubuike, Devon Dotson and the rest of the Jayhawks are done.

Duke is coming into its own this tournament, and playing much closer to what a typical Blue Devils team looks like than the one that played this regular season. They look like one of the best teams in the tournament and making the committee feel foolish for slapping a No. 3 seed on them. Providence is a casualty as a result.

No. 4 Wisconsin over No. 9 Marquette

“Wouldn’t this be something: an all-Wisconsin showdown in the Sweet 16,” Walder wrote of this happenstance.

He added some thoughts on what the win might have looked like for the Badgers: “Wisconsin is favored and … just like that, Markus Howard and Marquette’s Cinderella run comes to a screeching halt. Nate Reuvers records a couple of key blocks down the stretch as Wisconsin’s defense comes through again.”

MIDWEST: No. 4 Wisconsin over No. 3 Duke

It’s not the National Championship game, and it’s only a simulation, but still–sweet, sweet revenge.

Walder’s guess was that it would have been a gripping game, too: “D’Mitrik Trice knocks down a 3 at the horn to put the Badgers over the top and win by one … they’re going to the Final Four!”

EAST: No. 4 Maryland over No. 7 West Virginia

The mighty Big Ten is now 2-2 in the Elite 8, and is guaranteed a rep in the national championship game. [Anthony] Cowan and [Jalen] Smith lead the way again, and West Virginia just can’t keep up with the Maryland offense. The Terps win by 10 and cut down the nets.

And the Bulldogs’ run is finally over. They took down some goliaths but ultimately it was an underrated No. 6 seed that got the best of them. Childs got the better of Atkinson at both ends of the floor and, as a result, the Cougars are moving on to Atlanta.

The title defense is very much on. Two years ago, the Cavaliers were knocked out as a No. 1 seed in the first round. Now they have a national championship under their belt, and back-to-back Final Fours … at least. It’s an incredible accomplishment for a team that has, in BPI’s estimation, the 220th-best offense in the country. Tony Bennett’s stock is flying higher than ever. UVA completes a bizarre looking and utterly shocking Final Four made up of two No. 4 seeds and two No. 6s. But in a strange season for college basketball, maybe this is what we should have expected.

No. 4 Wisconsin over No. 4 Maryland

The Badgers and the Terps met just once during the regular season, and it ended in spectacular, game-winning-3 fashion. Wisconsin and Maryland have also only met once before in the NCAA Tournament (in 2002) and it ended in a resounding 30-point win for the Terps.

“Maryland falls behind early but makes a late run and pulls ahead in the final minute. But in the final seconds, history repeats itself: Brad Davison knocks down a 3 to put the Badgers up at the very end, just as he did when these two schools played in January.”

The UVa offense finally held back the Cavaliers. Hot starts by [Yoeli] Childs and Jake Toolson put the Cougars ahead by double digits at the half, and Virginia struggles to fight its way back into it. While BYU’s run to the finals was also incredibly unlikely, it was actually slightly more likely than Wisconsin’s, though both were just over 2%. Now, the Cougars are very slight favorites to win the national championship.

Walder noted that despite the Badgers’ chance at winning the championship sitting below 1 percent heading into the tournament, they came out with the greater win probability in each individual matchup and indeed, won the dang thing.

“It’s a team effort, but Nate Reuvers leads Wisconsin with 16 points,” Walder guessed. “Gard is lauded for getting his group to play their best when it mattered the most. This is a team that did not begin the season in the AP’s Top 25 and only barely cracked it in the last set of rankings. Not that any of that matters, because the Badgers are now (simulated) champions!” 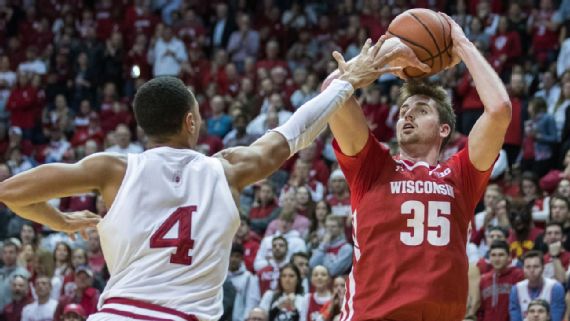 So someone had to create this:

… at the UW Varsity Band Concerts …