Early last year, I shared a video explaining that trade deficits generally don’t matter. I even suggested trade deficits might be a sign of economic strength because foreigners who earned dollars were anxious to invest them in the American economy.

I’m recycling this video to make a point about trade and the economy for both Trump supporters and Trump critics.

And the reason I’m making this point is that I want Trump supporters to realize that they shouldn’t be upset about trade balances. Indeed, they should be happy because there’s a strong argument that the trade deficit is increasing in large part because Trump’s pro-growth tax reform and regulatory reform and making America more attractive for foreign investors.

For Trump critics, I want them to understand the same point, though from a different perspective. Many of them have been (correctly) critical of Trump’s protectionism. And they’ve been happy to point out that his taxes on foreign goods haven’t reduced the trade deficit.

But I would like them to contemplate why the economy has continued to grow. Hopefully, they will realize that pro-market policies in other areas are offsetting the damage of protectionism and therefore be more supportive of capitalism.

The Wall Street Journal opined on this topic last year.

President Trump can take a bow that his tax reform and deregulation are working as intended. …The trade deficit grew… This is not bad economic news. Imports grew faster than exports as the U.S. economy accelerated and much of the world slowed. The dollar grew stronger as capital flowed into the U.S., and the trade deficit grew to offset the larger capital inflows as it must by definition under the national income accounts. …a larger trade deficit is a benign byproduct of a healthier American economy. Supply-side policies revived animal spirits and gave the economy a second wind. …The best way to respond to a trade deficit is to ignore it.

From a left-of-center perspective, Fareed Zakaria made the same point in a recent column for the Washington Post.

Trump campaigned relentlessly on the notion that America’s economy was being ruined by large trade deficits. …He promised on the campaign trail in June 2016, “You will see a drop like you’ve never seen before.”In reality, the trade deficit has risen substantially under Trump. …when the United States has grown robustly, its trade deficit has tended to rise. If you want to achieve a sharp decline in the trade deficit, it’s easy — just trigger a recession. …while the United States has a deficit in manufactured goods with the rest of the world, it runs a huge surplus in services (banking, insurance, consulting, etc.). …The United States is also the world’s favorite destination to invest capital, by a large margin. As Martin points out, when you look at this entire picture, “the trade deficit should be something to brag about rather than denounce.” …Trump’s trade policy has been an enormously costly exercise, forcing Americans to pay tens of billions in taxes on imported goods, then using tens of billions of dollars in taxpayer funds to compensate farmers for lost income (because of retaliatory tariffs)… All to solve a problem that isn’t really a problem.

Veronique de Rugy of the Mercatus Center, writing for Reason, summarizes the issue.

President Donald Trump hates the trade deficit. …If elected, he promised, he would “end our chronic trade deficits.” …free traders…explained, a country’s trade balance is determined overwhelmingly by factors such as the U.S dollar serving as a reserve currency, the ratio of savings to investment opportunities at home and abroad, and the relative attractiveness of that country’s investment climate. As long as the United States is growing and remains an attractive place to invest, we Americans will continue to run trade deficits with the rest of the world. …They want these dollars, in part, to buy American exports. …More important, and often overlooked: Foreigners want dollars also to invest in America’s powerful economy. …the current-account deficit is a mirror image of the capital-account surplus. This is why Mark Perry of the American Enterprise Institute describes imports as “job-generating foreign investment surpluses for a better America.” It is thus no surprise that as the American economy grew, the trade deficit also grew.

I’ll close with a chart that’s in the video because it reinforces the three columns cited above.

As you can see, the link between the trade deficit and an investment surplus isn’t just a theoretical construct. It’s an accounting identity. 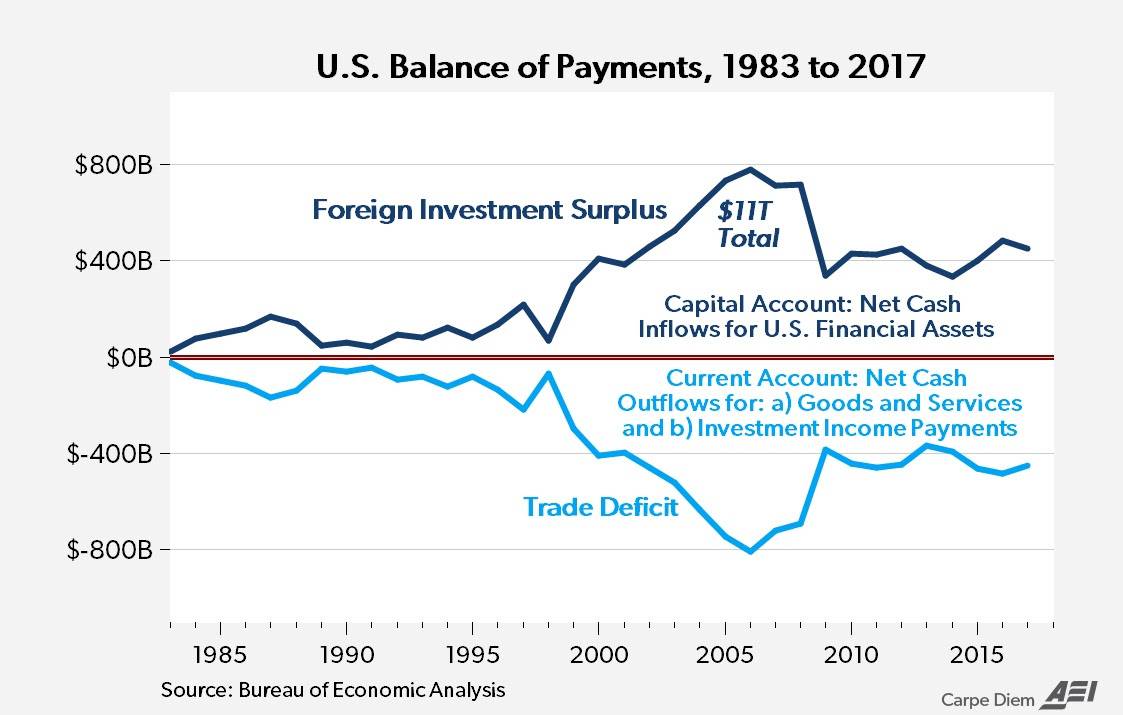 The bottom line is that people on both sides of the political debate should ignore the trade deficit and instead focus on the the tried-and-true recipe for generating prosperity.