Those of us who remember these days …

… should be pleased with what Clint Evans reports:

Sources have indicated that the Milwaukee Brewers will change their uniforms and primary logo for the 2020 MLB season. Indeed, this would mark the first full uniform change for Milwaukee as a franchise since the 2000 season when they opened Miller Park. Remember, in 2020 Nike will take over as the official uniform supplier of MLB next season.

Furthermore, the organization will be going to a throwback classic from the past. From 1978 to 1993, Milwaukee had a classic baseball glove with a ball inside the glove logo on a lighter toned blue cap. Now, that is very similar to what the new logo will look like. Without question, this is the logo that many middle-aged fans remember the Brewers wearing during their formative years watching the club.

The team is expected to go with a pinstripe look similar to their current alternate uniform set. This will become the primary uniform set along with the new ball glove logo.

Equally important, a major Milwaukee Brewers site has also heard of the same rumor. Therefore, see the following tweet from ‘Reviewing the Brew’:

Hearing word that the #Brewers will be coming out with new primary jerseys for the 2020 season.

It’s always exciting when a team changes it’s logo or uniforms, especially if it’s a classic franchise with a rabid fan base like the Brewers. By comparison – floundering teams who change uniforms like the Miami Marlins or Cleveland Browns – don’t seem quite as exciting.

However this situation is different.

With a star player like Christian Yelich under contract and a solid manager like Craig Counsell, the Brewers have the organizational arrow pointing up entering 2020. They followed up a trip to the NLCS in 2018 with a Wildcard appearance in 2019, losing in heartbreak fashion to the Washington Nationals.

Now, the Brewers will have new uniforms in 2020 that should make their great fan base very happy. Equally important, a lot of people will run out and buy that new swag; which should in turn make Nike very happy as the official uniform supplier of MLB.

I wasn’t especially a fan of the ball-in-glove look, which frankly ripped off teams with actual tradition, namely the Yankees. I also am not a fan of baby blue road uniforms, though as a blue team the Brewers were more appropriate for blue (as were the Royals, the Cubs — though white-pinstripes-on-blue is an abomination — and the Blue Jays) than the White Sox, Cardinals and Phillies.

Blue and gold is an accident anyway. Those were the colors of the 1969 Seattle Pilots …

… which hurriedly became the Brewers, thanks to stitch-pulling instruments, when Bud Selig purchased the Pilots (who managed to go bankrupt during their first season, believe it or don’t) during 1970 spring training.

Selig’s original idea was to emulate the Milwaukee Braves’ navy blue and red color scheme. (As if there aren’t enough teams wearing that color scheme now.)

But the uniforms the Brewers have worn since the year before Miller Park opened (they were supposed to debut in Miller Park, but the 1999 fatal crane accident delayed the stadium opening by a year) are quite uninspired, especially the name and number fonts. (Times New Roman? Really?) They have been augmented, if that’s what you want to call it, by navy blue (“Brewers” and “Milwaukee”), Spanish-language (“Cerveceros”), German-named (“Bierbrauer”), gold and even green and red (the Italian-themed “Birrai”) jerseys since then. 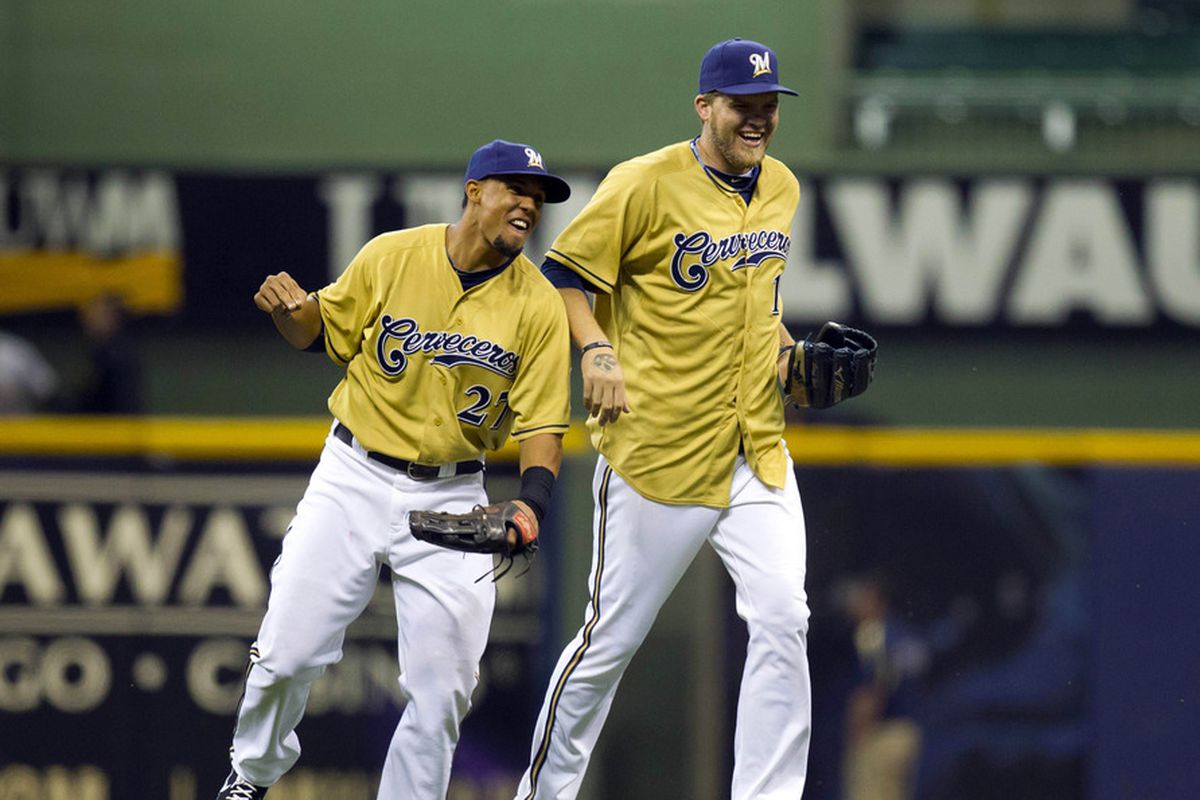 The MB-logo uniforms have always been more popular, perhaps partly because of the blah nature of the current uniforms, though more likely because of the success of those days. (As in one World Series appearance and a division half-title, and a few non-playoff winning seasons.) By that measure the current Brewers uniforms should be as popular since they have been worn during four postseasons, though no World Series visits.

I have argued here before that the Brewers really should adopt beer colors, such as black (for dark beer), gold (obviously) and cream (since Milwaukee is the Cream City). However, no one is paying attention to my correct views. (As usual.) Therefore, I suppose the question is whether the Brewers will go with navy blue (now) or royal blue (before the 1994 “Motre Bame” uniforms) and metallic gold (now) or yellowgold (first version) colors.