Since I have worked every Labor Day for at least seven years (and probably most of my adult life, because people who pay to get newspapers don’t like it when they don’t show up on time, irrespective of what the calendar says), the writers of all those memes about how weekends and holidays were brought to you by unions can go straight to hell.

No business, no jobs, and no tax money to pay government employees’ salaries. You’d think liberals would someday learn that.

Some people have the correct perspective about work. For instance, Tom Woods …

… It’s Labor Day, which means your Facebook feed is full of propaganda about labor unions giving us the weekend.
Oh, really?
Then I guess all Bangladesh needs to get weekends off is a bunch of labor unions?
(And if that’s all they need, why do we send foreign aid to the Third World? Shouldn’t labor unions suffice to do the trick?)
Or how about the 99% of human history in which more than 99% of the population was desperately poor: those societies just needed some labor unions?
Until society grows wealthy enough, all the labor unions in the world can’t make it possible to take two days a week off from work.
Can you imagine, in the primitive economies of 300 years ago, agitating for a shorter work week? People would have thought you insane.
With little capital, and with most goods produced by hand, it takes all the labor power all the hours it can spare just to make life barely livable.
Something did bring you the weekend, but it sure as heck wasn’t labor unions.
Same for better working conditions and shorter hours.
What was it?
The very capitalism the propagandists despise.

Simply stated, workers get paid on the basis of what they produce and the most effective way of boosting productivity is to have more saving and investment.

This is (one of the reasons) why I have so much disdain for politicians who try to foment discord and division between workers and capitalists.

To be sure, there will always be a tug of war between investors and employees over which group gets bigger or smaller slices. But so long as we have the right policies, they’ll be bickering over how to divide an ever-growing pie.

That’s a nice problem to have. Especially compared to what happens when politicians intervene – for the ostensible purpose of helping workers – and adopt policies that create economic stagnation.

Larry Reed of the Foundation for Economic Education wrote with great insight about the link between labor and capital a few years ago. He starts with some basic economics.

…as complementary factors of production, labor and capital are not only indispensable but hugely dependent upon each other as well. Capital without labor means machines with no operators, or financial resources without the manpower to invest in. Labor without capital looks like Haiti or North Korea:plenty of people working but doing it with sticks instead of bulldozers, or starting a small enterprise with pocket change instead of a bank loan. …There may be no place in the world where there’s a shortage of labor but every inch of the planet is short of capital. There is no worker who couldn’t become more productive and better himself and society in the process if he had a more powerful labor-saving machine or a little more venture funding behind him. It ought to be abundantly clear that the vast improvement in standards of living over the past century is not explained by physical labor (we actually do less of that), but rather to the application of capital.

He concludes that we should be celebrating Labor Day and Capital Day.

I’m not “taking sides” between labor and capital. I don’t see them as natural antagonists in spite of some people’s attempts to make them so. Don’t think of capital as something possessed and deployed only by bankers, the college-educated, the rich, or the elite. We workers of all income levels are “capital-ists” too—every time we save and invest, buy a share of stock, fix a machine, or start a business. …I’ve traditionally celebrated labor on Labor Day weekend—not organized labor or compulsory labor unions, mind you, but the noble act of physical labor to produce the things we want and need. …on Labor Day weekend, I’ll also be thinking about the remarkable achievements of inventors of labor-saving devices, the risk-taking venture capitalists who put their own money (not your tax money) on the line and the fact that nobody in America has to dig a ditch with a spoon or cut his lawn with a knife. …Labor Day and Capital Day. I know of no good reason why we should have just one and not the other.

Courtesy of Mark Perry at the American Enterprise Institute, here’s a nice depiction of how labor and capital are interdependent. 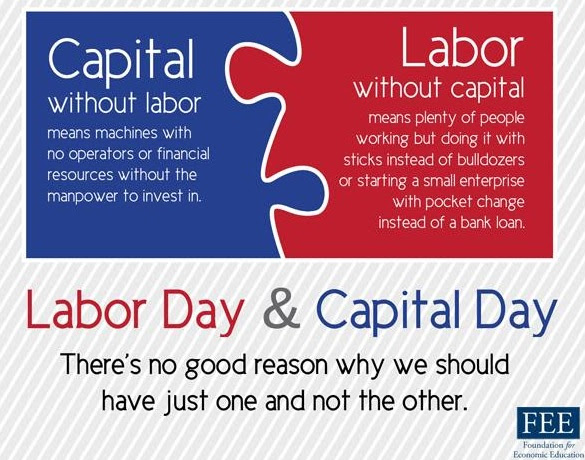 P.S. When economists write about the relationship between capital and labor (savings => investment => productivity => wages), some critics assert this is nothing other than “trickle-down economics.”

Yet this is the mechanism for growth under every economic theory – even Marxism and socialism. The only thing that changes under those approaches is that politicians and bureaucrats control investment decisions. And we know that doesn’t work very well.