London police investigated more murders than their New York counterparts did over the last two months, statistics show, as the British capital’s mayor vowed to fight a “violent scourge” on the streets.

There were 15 murders in London in February against 14 in New York, according to London’s Metropolitan Police Service and the New York Police Department. For March, 22 murders were investigated in London, with 21 reports in New York.

In the latest bloodshed, a 17-year-old girl died on Monday after she was found with gunshot wounds in Tottenham, north London, a day after a man was fatally stabbed in south London.

“The Mayor is deeply concerned by violent crime in the capital – every life lost to violent crime is a tragedy,” a spokeswoman for Mayor Sadiq Khan said in a statement on Tuesday.

“Our city remains one of the safest in the world … but Sadiq wants it to be even safer and is working hard to bring an end to this violent scourge.”

Including January’s figures, New York had still experienced more murders so far this year than London. The cities have a similar-sized population.

Gun violence is much less of a problem in Britain, which has strict gun control laws, than in the United States, and most British police are not equipped with firearms.

But British politicians and police are increasingly expressing concern about London’s rising murder rate, which is driven by a surge in knife crime. Of the 47 murders in London so far this year, 31 have been committed with knives.

Britain’s interior ministry said it was consulting on new laws to further restrict dangerous weapons, including banning online stores from delivering knives to residential addresses and making it an offence to possess certain weapons in public.

“This government is taking action to restrict access to offensive weapons as well as working to break the deadly cycle of violence and protect our children, families and communities,” a Home Office spokesman said.

Khan, who has been in office since May 2016, is from the opposition Labour Party. Before him, Conservative Boris Johnson was mayor for eight years. The national government has been run by the Conservatives since 2010, with Prime Minister Theresa May previously serving as interior minister from 2010 to 2016.

The Ben Kinsella Trust, an anti-knife crime charity named after a young victim, said social media amplified a range of other factors that have contributed to the crisis.

The charity’s CEO Patrick Green said there had been extra funding to tackle knife crime, which he welcomed, but added that the government needed to act with more urgency and that budget cuts affecting youth services had played a part.

“This has been a horrendous year. It’s looking like it’ll be worse that last year, which was worse than the year before,” he told Reuters.

“The response so far has been too slow… It feels like we’re in a crisis and we need to respond in that way.”

The UK has seen a disturbing surge in acid attacks in recent years with London being the worst hit.

There are plans to further restrict the sale of corrosive substances — but why are such brutal attacks on the rise? 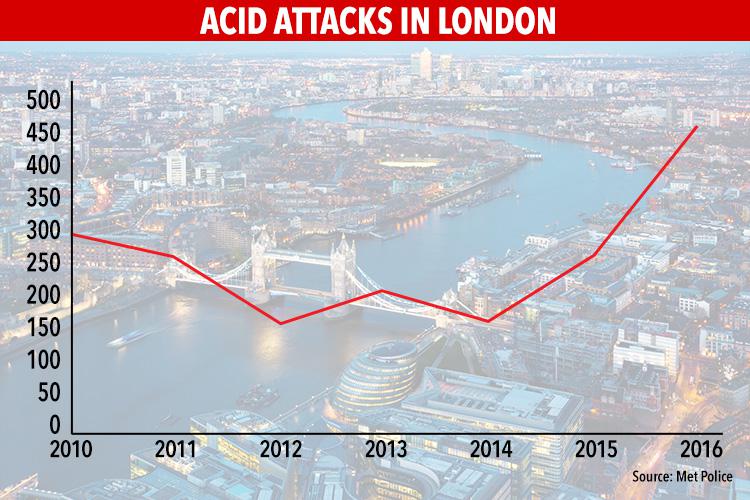 The UK has one of the highest rates of acid attacks per capita in the world, according to Acid Survivors Trust International (ASTI).

It claims the country does not have “tight controls on acid sales” or “legislation specific to acid attacks”.

ASTI’s figures, quoting the police, reveal the number of recorded attacks has increased nearly three-fold from 228 recorded crimes in 2012 to 601 attacks in 2016.

With more than 400 incidents reported in the six months, 2017  was widely regarded as the worst ever year for acid attacks.

Unlike in other countries, where 80 per cent of acid attacks are against women, in the UK most victims are men, ASTI says.

Gang disputes are said to be behind the rise in acid attacks in London and other British cities.

London has emerged as a hot spot for acid attacks in recent years, with more than half of incidents within the UK taking place in the capital.

Outside of the capital, areas such as the West Midlands and Essex have also seen large rises in acid attacks in recent years as reports soared from 340 in 2014 to 843.