On many Independence Days I repeat the words of former Facebook Friend (former because he’s not on Facebook anymore) Tim Nerenz:

Americans are the perfected DNA strand of rebelliousness.  Each of us is the descendant of the brother who left the farm in the old country when his mom and dad and wimpy brother told him not to; the sister who ran away rather than marry the guy her parents had arranged for her; the freethinker who decided his fate would be his own, not decided by a distant power he could not name.  How did you think we would turn out?

Those other brothers and sisters, the tame and the fearful, the obedient and the docile; they all stayed home.  Their timid DNA was passed down to the generations who have endured warfare and poverty and hopelessness and the dull, boring sameness that is the price of subjugation.

They watch from the old countries with envy as their rebellious American cousins run with scissors.  They covet our prosperity and our might and our unbridled celebration of our liberty; but try as they might they have not been able to replicate our success in their own countries.

Dan Mitchell somewhat brings this up in comparing here with the “old country” for those of us of Scandinavian heritage:

The most persuasive data, when comparing the United States and Scandinavia, are the numbers showing that Americans of Swedish, Danish, Finnish, and Norwegian descent produce much more prosperity than those who remained in Sweden, Denmark, Finland, and Norway.

But maybe the United States also was fortunate in that it attracted the right kind of migrant from Scandinavia.

If you’re in a rush and simply want the headline results, here are some excerpts from the abstract.

This paper examines the joint evolution of emigration and individualism in Scandinavia during the Age of Mass Migration (1850-1920). A long-standing hypothesis holds that people of a stronger individualistic mindset are more likely to migrate as they suffer lower costs of abandoning existing social networks. …I propose a theory of cultural change where migrant self-selection generates a relative push away from individualism, and towards collectivism, in migrant-sending locations through a combination of initial distributional effects and channels of intergenerational cultural transmission. …the empirical results suggest that individualists were more likely to migrate than collectivists, and that the Scandinavian countries would have been considerably more individualistic and culturally diverse, had emigration not taken place.

If you’re interested in more detail, here are passages from the study.

We’ll start with the author’s description of why she studied the topic and what she wanted to determine.

People of Western societies are unique in their strong view of themselves… This culture of individualism has roots in the distant past and is believed to have played an important role in the economic and political development of the region… differences in individualism and its counterpart, collectivism, impact processes of innovation, entrepreneurship, cooperation, and public goods provision. Yet, little is known about what has influenced the evolution of individualism over time and across space within the Western world. …I explore the relationship between individualism and a common example of human behavior: migration. I propose a theory, where migration flows generate cultural change towards collectivism and convergence across migrant-sending locations.

Keep in mind, by the way, that societies with a greater preference for individualism generate much more prosperity.

Anyhow, Professor Knudsen had a huge dataset for her research since there was an immense amount of out-migration from Scandinavia.

During the period, millions of people left Europe to settle in New World countries such as the United States. Sweden, Norway, and Denmark experienced some of the highest emigration rates in Europe during this period, involving the departure of approximately 25% of their populations. …Total emigration amounted to around 38% and 26% in Norway and Sweden respectively.

Here are some of her findings.

I find that Scandinavians who grew up in individualistic households were more likely to emigrate… people of individualistic mindsets suffer lower costs of leaving existing social networks behind… the cultural change that took place during the Age of Mass Migration was sufficiently profound to leave a long-run impact on contemporary Scandinavian culture. …If people migrate based, in part, on individualistic cultural values, migration will have implications on the overall evolution of cultures. Emigration must be associated with an immediate reduction in the prevalence of individualists in the migrant-sending population.

Here is her data on the individualism of emigrants compared to those who stayed in Scandinavia. 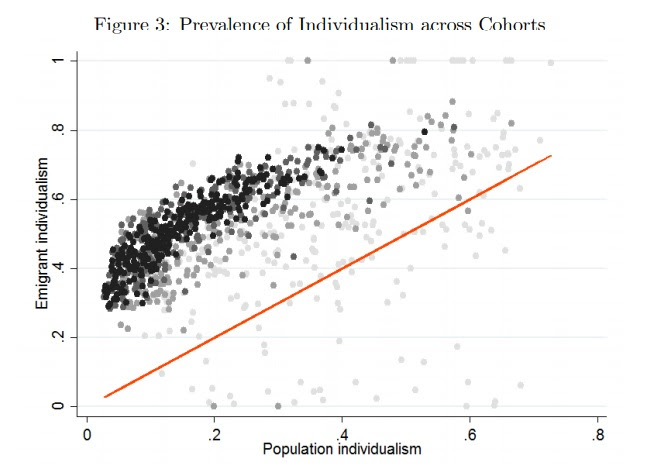 As an aside, I find it very interesting that Scandinavian emigrants were attracted by the “American dream.”

…historians agree that migrants were motivated by more than hopes of escaping poverty. Stories on the ‘American Dream‘ and the view of the United States as the ‘Land of Opportunities‘ were core to the migration discourse. Private letters, diaries, and newspaper articles of the time reveal that ideas of personal freedom and social equality embodied in the American society were of great value to the migrants. In the United States, people were free to pursue own goals.

And this is why I am quite sympathetic to continued migration to America, with the big caveat that I want severe restrictions on access to government handouts.

When the more individualistic Scandinavians with “get up and go” left their home countries, that meant the average level of collectivism increased among those remained behind.

Several observations are worth mentioning in light of the revealed actual and counterfactual patterns of individualism. First, one observes a general trend of rising individualism over the period, which is consistent with accounts for other countries… Second, the level of individualism would have been considerably higher by the end of the Age of Mass Migration in 1920, had emigration not taken place. Taking the numbers at face value, individualism would have been between 19.0% and 20.3% higher on average in Sweden, 17.8% and 27.9% in Norway, and 7.6% and 12.5% in Denmark, depending on the measure considered.

… To wrap this up, here’s a restatement of the key findings from the study’s conclusion.

I find that people of an individualistic mindset were more prone to migrate than their collectivistic neighbors. …Due to self-selection on individualistic traits, mass emigration caused a direct compositional change in the home population. Over the period this amounted to a loss of individualists of approximate 3.7%-points in Denmark, 9.4%-points in Sweden, and 13.6%-points in Norway. …The cultural change that took place during the Age of Mass Migration was sufficiently profound to impact cross-district cultural differences in present day Scandinavia. Contemporary levels of individualism would thus have been significantly higher had emigration not occurred. …The potential societal implications of the emigration-driven cultural change are of great importance. The period of the Age of Mass Migration was characterized by industrialization, urbanization, and democratization in Scandinavia. Individualism was generally on the rise, in part due to these developments, but it seems conceivable that the collectivistic turn caused by emigration played a role in subsequent institutional developments. While economic freedom is high in contemporary Scandinavia, the region is known for its priority of social cohesion and collective insurance. This is particularly clear when contrasting the Scandinavian welfare model with American liberal capitalism.

This is first-rate research.

Professor Knudsen even understands that Scandinavian nations still have lots of economic freedom by world standards.

Imagine, though, how much economic freedom those countries might enjoy if the more individualism-minded people hadn’t left for America? Maybe those nations wouldn’t have dramatically expanded their welfare states starting in the 1960s, thus dampening economic growth.

The obvious takeaway is that migration from Denmark, Sweden, and Norway to the United States was a net plus for America and a net minus for Scandinavia.

P.S. When she referred in her conclusion to “American liberal capitalism,” she was obviously referring to classical liberalism.