Earlier this month, I talked about the economy’s positive job numbers. I said the data is unambiguously good, but warned that protectionism and wasteful spending will offset some of the good news from last year’s tax reform.

This is what’s frustrating about the Trump presidency.

Good policies in some areas are being offset by bad policies in other areas, so it’s not easy assigning an overall grade.

And it’s also difficult to predict the effect on economic performance. If you look at the formula for a prosperous economy, there’s no way of predicting whether Trump is a net positive or a net negative. At least in my humble opinion.

As such, I’ll be very curious to see what happens to America’s score in subsequent issues of Economic Freedom of the World.

It would be nice if the United States got back into the Top 10. For what it’s worth, I’m guessing America’s score won’t measurably improve.

That being said, if there was a pro-con debate on Trump‘s performance, some people would be quite confident about declaring victory.

Are low taxes key to a booming economy? Their success is harder than ever to deny after Friday’s report that the U.S. economy grew 4.1% in the second quarter, bringing the average quarterly growth rate during the Trump presidency, growth has been almost 40% higher than the average rate during the Obama years, and per capita growth in gross domestic product has been 63% faster. …The CBO now projects that additional revenue from this economic surge will offset 88.2% of the estimated 10-year cost of the tax cut. …The CBO’s April revision projected an extra $6.1 trillion in GDP over the next decade—more than $18,000 of growth for every man, woman and child in America. …the Labor Department reports that worker bonuses have hit the highest level ever recorded. The Commerce Department reports that wages and salaries are growing almost 25% faster under President Trump than under Mr. Obama.

Since I have great confidence that lower tax rates are good for growth and that Laffer Curve-type feedback effects are real, I want to applaud what Mike wrote.

And since I’ve also dissed the idea of “secular stagnation,” I also like this part of his column.

Perhaps the most important narrative discredited by the economic revival is the “secular stagnation” excuse. Throughout the Obama years, progressive economists said Americans had become too old, lazy and complacent to achieve the growth that was regular before 2009. But somehow American workers overcame all of these supposed weaknesses when Mr. Trump changed federal policy. The problem was not our people but our government. Stagnation is not fate but a political choice.

Amen to that final sentence. Stagnation is the result of bad policy.

But my problem is that Trump has some bad policies that are offsetting his good tax reform. So I can’t help but think Mike is being too optimistic.

Let’s look at another perspective. It would be an exaggeration to state that Jimmy Pethokoukis of the American Enterprise Institute is in the “con” camp, but he definitely is skeptical.

GOP hot takes will come as fast and furious as the economic growth. “The tax cuts worked!” “Trumponomics rocks!” …Celebrating a stronger economy is not a bad thing, of course. Over the long run, sustainable economic growth is what generates higher living standards and greater social mobility. But drawing sweeping conclusions from a single three-month period is problematic…it doesn’t necessarily tell you a whole lot about where the economy is heading. There were eight quarters of 3 percent growth or faster scattered across the Obama presidency, including four of 4 percent or faster and one of 5.2 percent. But there was never much follow-through, and overall the expansion muddled through at roughly a 2 percent annual pace. …even a very strong report won’t tell us whether the Trump tax cuts, passed in December, are “working.” It’s just too soon. …that process will play out over a numbers of years.

This is a very sensible perspective. I’ve repeatedly warned not to overstate the importance of short-run data. And I also fully agree that there’s often a time lag between the adoption of good policy and the evidence of good results.

But I have the same complaint about the Pethokoukis column as I did about the Solon column. There’s a sin of omission because both focused on the tax reform.

As I noted above, we also need to consider the other policies that have changed in the last 18 months.

I don’t know the answer, but maybe this image will illustrate why we should hesitate before making sweeping assessments. 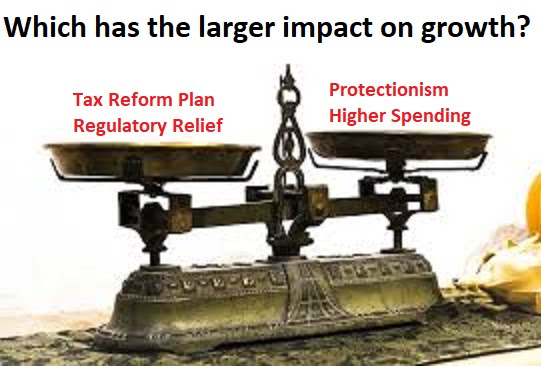 And also keep in mind that we have no way of knowing whether there’s a Fed-created bubble in the economy. As I said in the interview, what if 2018 is akin to 2006? Back then, most people underestimated the possibility that easy money and Fannie-Freddie subsidies had created an unsustainable housing boom.

But even if we ignore that wild card, I can’t help but wonder whether Trump‘s pro-growth polices and Trump‘s anti-growth policies are resulting in a wash.

That ignores the moral component of tax cuts, that government does not deserve more of your money just because politicians want more of your money. That is particularly true given the fact that no societal problem we have today can be solved by government. The War on Poverty, started more than a half-century ago to get Democrats black votes, has achieved as much as doing nothing would have, except for that part about Democratic votes.

On the left, the idea that the tax cuts signed into law by President Trump benefited no one but “the rich” is almost a mantra. False, of course, but somehow the media continue to repeat it.

Google “Trump tax cuts of the rich” and you get about 6.67 million hits. So it’s quite an item of discussion out there.

And it’s an increasingly common talking point among the Democrats’ far-left-of-center representatives as the midterm elections loom. Why, it’s almost like they’re spreading “fake news” to the voters or something.

The truth is, as a new report shows, average American workers are benefiting not solely by having their incomes boosted by tax cuts, but by having bigger benefit-packages, too.

Rather than focus on the abstract benefits of the tax changes, Americans for Tax Reform has listed literally dozens of companies that are delivering more benefits to their workers, thanks to tax cuts. They range from very small businesses to major multinational corporations.

“We are a small manufacturing business casting artwork for artist in bronze we have 9 employees and because of the tax cuts and the current business friendly climate we are for the first time offering employees health care insurance costing our company 40k per year,” the company said.

Meanwhile, following tax cuts, Express Scripts in Missouri announced, “The company will … create a $30 million education fund for employees’ children. The fund will assist with paying for college and vocational training.”

Retailing giants Wal-Mart and Lowes’ employees will provide a special benefit up to $5,000 for families that want to adopt children.

Lowes says it will also “be expanding its benefits package for full-time workers to include paid maternity leave for 10 weeks, paid parental leave for two weeks … and faster eligibility for health benefits.”

Fast-food giant McDonald’s, which along with Wal-Mart is one of the nation’s largest employers, is extending a raft of benefits to some 400,000 of its workers.

As ATR notes, even McDonald’s “employees who work just 15 hours a week, receive $1,500 worth of tuition assistance every year per year. The money can be applied to community college, trade schools, or a traditional 4-year university for employees or their family members.”

LHC Group, a Lafayette, La.-based health services company, sent out an email to its workers from the CEO detailing exactly why things were changing so workers would understand.

“I want to point out the positive impact the ‘Tax Cut and Jobs Act’ will have for our company and for each of you,” the email begins.

“As a result of this legislation, our company’s effective tax rate has been reduced from roughly 41% to a projected range of 29-30% for 2018. Because of our reduced tax burden, we will be able to make important investments in our company, including additional investments in our greatest asset — our people. But rather than making a small, short-term financial overture, we have decided to make meaningful investments in 2018 that will positively impact our employees — in a sustainable and long-term fashion.”

In addition to most workers seeing more take-home pay, the company will help pay even more of the burden for fast-rising insurance premiums, which have increased at double-digit rates under ObamaCare.

We hope you get the picture. The list of companies goes on and on, and the number of employees that benefit go into the tens of millions. Tax cuts have made everyone richer by enlarging the economic pie.

In case you’ve forgotten, the amount of tax relief was significant.

As CNSNews.com reminds us: “The Tax Cuts and Jobs Act, which was opposed by all Democrat members of Congress, did several things, such as change the tax brackets to lower rates for individuals, nearly doubled the standard deduction, and eliminated the mandate to buy health insurance, among other reforms.”

And it also cut taxes on U.S. corporations, which, at 35%, faced the stiffest tax burden in the world before Trump’s cuts. Today they’re at 21%.

As a result of these tax cuts, companies have more money left for investments, not just in equipment, but in workers’ training, education and personal lives.

In a faster growing economy with a tightening labor market — and that’s where we are right now, with 4.1% GDP growth and a 3.8% unemployment rate — companies have much greater incentives to retain good workers. So, with the higher profits from tax cuts, they boost pay and benefits.

This, by the way, is why when presidents of both major political parties have cut taxes over the last 100 years, economic boom times have followed. And it happens not some of the time, but all of the time. It’s happening now.

There’s no question that American workers have it better today than they did a mere two years ago. Their wages are higher. They’re getting fat bonuses, some for the first time. And they’re receiving better, more diverse, benefit packages than ever before.

Knowing this, when their politicians return to their districts to campaign for upcoming midterm elections, voters should ask them a simple question: Will you now vote to make the tax cuts permanent?

But … but … what about the budget deficit?

That applies to this state too. Thanks to Republicans and not Democrats, families with children younger than 18 got a $100-per-child tax rebate earlier this year, and everyone in this state is enjoying our first sales tax holiday on school supplies, clothing and computers and computer supplies through Sunday. (More information here.)

That didn’t come from Democrats. Not a single Democrat running for governor nor, as far as I’m aware, any Democrat running for the Legislature has proposed cutting $1 of taxes. Not one. The letter D after a politician’s name in this state stands for “Dracula,” drinking your money, not your blood.