While looking for something else (Again?, readers ask), I hit upon the idea of combining two of my favorite subjects — fictional detectives and cars — though I’ve done that before here.

The imperative to create online lists of everything (i.e. top 10 reasons you should read The Presteblog, and by the way YOU WILL NOT BELIEVE NUMBER 7!) has created, to no surprise, several lists of top fictional detectives’ wheels, both here and abroad.

Remember the words “detective” (indicating non-marked police cars) and, most importantly, “fictional.” Along with Raymond Chandler’s The Simple Art of Murder and Ten Commandments for the Detective Novel, someone online created this less serious list of private-detective fiction requirements, from which number eight is appropriate for this blog:

One of the obvious cars on The Guardian‘s list, Starsky and Hutch’s Ford Torino (which, as with much of you will see herein, fits both rules 1 and 8, at least in the series’ first-season guise) …

… is about as likely to be used by real police detectives as, well, the Ferraris of “Miami Vice”:

Of course, Thomas Magnum can use a Ferrari — well, Robin Masters’ Ferrari (which was modified so Tom Selleck could sit in it):

So could San Francisco police Lt. Frank Bullitt own a Ford Mustang, because it was his personal car that he just happened to be driving on a Sunday morning while doing some work:

The lines got blurred with (one assumes) a Bullitt successor, the SFPD’s Nash Bridges:

To this list I add a detective who may not have made the list because he drove several cars, Joe Mannix …

… and a car that doesn’t make nearly enough appearances on TV:

(Apparently the world is waiting for me to create a Corvette-based work of fiction.)

Toptenz contributed its own list of iconic British detective (well, with at least one stretch) cars:

Nothing was conventional in the surreal world of the 1960s series The Prisoner, including the choice of car for the lead character Number Six, played by Patrick McGoohan.  Eschewing the director’s suggestion that Number Six should drive a Lotus Elan, McGoohan himself picked out the Lotus 7 arguing that the lightweight two-seater sports car better reflected Number Six’s maverick and freedom-loving persona.

Ironically, said Lotus was driven only in the beginning of every episode pre-capture and in the final scene of the last episode. Motor vehicles apparently were prohibited in The Village.

Roger Moore’s embodiment of the suave Samaritan Simon Templar meant that nothing less than an ultra-cool car would suffice. Initially a Jaguar was sought, but the company turned down The Saint’s producers fearing that the programme would be unsuccessful. Whoops. For the next seven years Moore drove instead a Volvo P1800: a stylish 2 litre sports car that symbolised Simon Templar’s virtuous, good-looking, sophisticated yet adventurous nature. Roger Moore was so impressed by the Volvo P1800 that he bought one for himself.

Tough, reliable, responsive, fast and able to cope in a sticky situation. Are we talking about the car or Bodie and Doyle, mercenary crime-fighters a.k.a. ‘The Professionals’? With its menacing throaty growl, the souped-up 3 litre Mark III Capri stood out in a series that featured many other cars that are considered classics today. With demanding car chases a staple of this action-packed show, the Mark III Capri was a natural choice, not only for its speed but for its (then) sleek lines and agile handling.

“Fire up the Quattro!” barks Detective Inspector Gene Hunt. This is the 1980s, and Hunt’s sporty, four-wheel drive, red Audi Quattro is perfect for throwing around corners and mowing down piles of cardboard boxes in the high-speed pursuit of villains. Getting from 0 to 60 mph in less than six seconds and a top speed of 140mph helps. And Gene Hunt would no doubt be delighted to know that thanks to his patronage of the classic Audi Quattro demand for 1980s models doubled. Proof, as if further proof was needed, of just how iconic the cars used in British TV shows can become even now.

Jack Regan, as played by John Thaw (again) was the hard-hitting no-nonsense guv’nor in this 1970s cop series based around the crime busting exploits of the Met’s flying squad. Only a tough-looking dependable brute of a car such as the Ford Granada would do for Jack. Swapping between the Granada S and the Granada Ghia at will, Regan and his sidekick George Carter would routinely chase the baddies at high speeds in these 3 litre beasts before leaping out and cuffing the miscreants with a cry of ‘You’re nicked, Sonny’! Luckily for the production team, not only was the Granada good looking, gruff and well suited to Regan’s character it was also light for its size making it a good choice for stunt work.

The aforementioned “Ashes to Ashes” was a spinoff of the series “Life on Mars,” described thusly by Honest John: 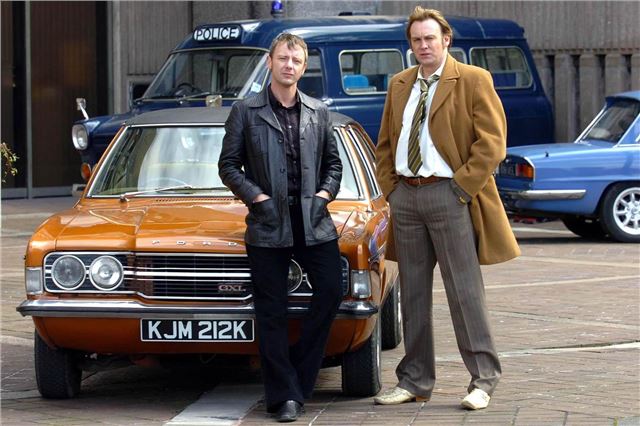 Detective Inspector Gene Hunt, star of Life On Mars, was a no-nonsense copper from the ‘70s, so what better car for him than a beige Ford Cortina? Despite famously trading up to an Audi Quattro in the Ashes To Ashes spinoff, set in the 1980s, the Hunt made his mark in a 1974 Mk III Cortina GXL.

That said, the car used for filming was actually made up of various Cortina parts, rendering it unfaithful to the model year it was supposed to be from: some viewers spotted that its spoiler, for example, wasn’t introduced until the 1975 Cortina, while the dashboard was from a later, facelifted car. Quite.

Away from the home islands, Australia brings us, of course, Mad Max:

A Danish–Swedish series called “The Bridge” apparently includes a Porsche …

… of which actor Sofia Hein tells The Guardian:

‘It’s horrible, I hate that car … I don’t hate it. I love-hate it. The thing is, it’s so hard to drive. The gears are very sensitive’

Speaking of TV series I can’t watch, there is “Alarm für Cobra 11,” a series that has run on German TV for 22 years about “Die Autobahnpolizei,” highway cops:

It remains hard for me to believe that this hasn’t become a U.S. TV series. Yes, we don’t have autobahns in the U.S., but you’d think it’d be ridiculously easy to translate the German setting (to be precise, North Rhine–Westphalia) to a state with a lot of freeways — say, California or, if you want more wide open spaces, Texas — and conjure up sufficient freeway-based crime as needed. (If you need a template, watch “CHiPs.” Like California Highway Patrol motor officers Ponch and Jon, “Die Autobahnpolizei” are state cops.)

I have to add one more series that faded away far too quickly — “Chase,” a little-known Jack Webb production about a special L.A.-ish investigative unit that has all the best vehicular toys, plus a police dog:

There are two episodes (and perhaps more that are hidden) on YouTube. Each of the episodes I’ve seen ends with, of course, a chase.