Because I was working (and even had I not been working I have an actual life), I did not watch MSNBC’s revealing Donald Trump’s 2005 income taxes Tuesday night.

Fortunately for those who care, Legal Insurrection did so you and I didn’t have to:

Rachel Maddow has a history of claiming big scoops which then flop.

There was the debunked 2012 big scoop about supposed GOP wrongdoing in Michigan. And the 2014 big scoop that the Koch Brothers were behind Florida groups pushing drug testing for welfare recipients, which was not true. We covered the Florida non-scoop big scoop, Rachel Maddow’s come undone with Koch Derangement Syndrome.

[Tuesday] Maddow claimed to have Donald Trump’s tax returns. The internet lit up. …

The White House pushed back even before airtime:

The White House is pushing back pre-emptively, saying that publishing those returns would be illegal.

It says, “You know you are desperate for ratings when you are willing to violate the law to push a story about two pages of tax returns from over a decade ago.” 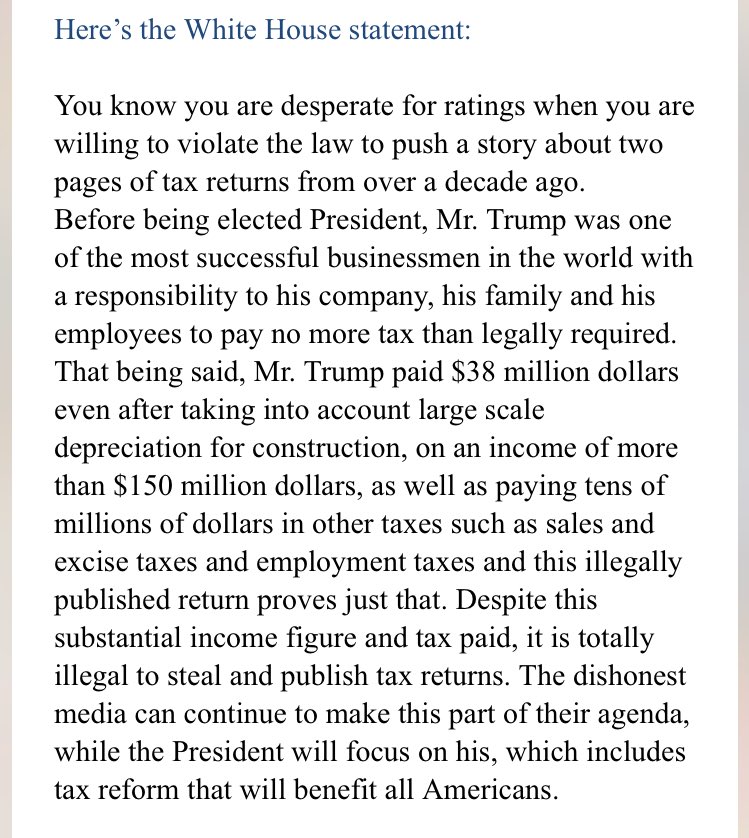 … As she was stalling, her secret source and guest published the information on his own website, which The Daily Beast then posted before Maddow made the reveal:

Donald Trump earned more than $150 million in the year 2005—and paid just a small percentage of that in regular federal income taxes. Daily Beast contributor David Cay Johnston has obtained what appear to be the first two pages of Trump’s 2005 federal income tax return, and published an analysis of those pages on his website, DCReport.org. The Daily Beast could not independently verify these documents.
The documents show Trump and his wife Melania paying $5.3 million in regular federal income tax—a rate of less than 4% However, the Trumps paid an additional $31 million in the so-called “alternative minimum tax,” or AMT. Trump has previously called for the elimination of this tax….

Trump’s 2005 return also shows that he’d continued to benefit from the roughly $916 million loss he reported in his 1995 return—published last year by The New York Times. Using a loophole Congress closed in 1996, Trump converted that loss into a tax credit for the same amount he could offset against income.

Tucker Carlson also reported on the story as Maddow was stalling …

So there was no there there.

If anything, Maddow helped Trump by showing the paid $38 million in taxes on $150 million of income. Hardly the narrative the Democrats like.

Not only did Maddow get scooped on her own scoop, there are two inconvenient facts, reported by Chicks on the Right:

The big story of the night is President Trump’s 2005 tax returns. As it turns out, he paid $38 million in taxes on over $150 million of income. Zero Hedge broke this down– he paid “$5.3 million in regular federal income tax, and an additional $31 million of ‘alternative minimum tax,’ or AMT.” …

Or, put another way in a Fox & Friends graphic:

The Journal reports that because of losses in previous years, Mr. Trump’s adjusted gross income in 2005 was just $48.6 million. MSNBC may have just produced the greatest argument ever against the Alternative Minimum Tax. Does anyone this side of Bernie Sanders—or come to think of it, Rachel Maddow—think that the Internal Revenue Service should confiscate 78% of someone’s adjusted gross income?

We learned last night that Hillary Clinton’s claims about Mr. Trump’s taxes were off target. But another person who should be feeling at least a little embarrassed is the American media’s most beloved billionaire, Berkshire Hathaway CEO Warren Buffett. In the heat of the campaign last year Mr. Buffett, a Democratic donor, released his 2015 tax returns and challenged Mr. Trump to do the same.

Mr. Buffett is estimated by Forbes to be worth around $78 billion, or roughly eight times Mr. Trump’s most optimistic assumptions about his own wealth. Yet in October Mr. Buffett revealed that he paid just $1.8 million in federal taxes in 2015, less than 5% of what Mr. Trump had paid a decade earlier, not even adjusted for inflation. Of course this is just one year of tax data on Mr. Trump and as a businessman who’s had his share of failures, he may have paid little or nothing in other years. But $38 million is a big tax bill for anybody, at any time.

Along with putting to rest the canard that the President doesn’t pay taxes, perhaps last night’s MSNBC show will finally persuade media folk like Charlie Rose to stop treating Mr. Buffett as the conscience of American business. Many journalists have fallen for Mr. Buffett’s folksy pitch for higher tax rates because he creates the impression that he is representative of a much larger group of people who are unfairly denying Washington its needed revenue. While it’s true that our complicated tax code benefits people rich enough to hire the brightest accountants and tax attorneys, Mr. Buffett is in a class by himself.

Whether rates go up or down is largely irrelevant to the sage of Omaha, because he manages to report a remarkably small income for someone with such gargantuan assets. Maybe Mr. Trump should ask him how he does it.

If journalists start applying the same standards to Donald Trump that they apply to Mr. Buffett, that would absolutely count as news. Well done, Ms. Maddow.

The added inconvenient fact for liberals is that all of Trump’s 2005 income came from the private sector, something neither Sanders nor Obama could claim.

So once again idiot liberais have made Trump look sympathetic. You need not be a Trump non-fan or fan to see some holes in this. Dan Mitchell sees them:

Interestingly, it appears that Trump pays a lot of tax. At least for that one year. Which is contrary to what a lot of people have suspected – including me in the column I wrote on this topic last year for Time.

Some Trump supporters are even highlighting the fact that Trump’s effective tax rate that year was higher than what’s been paid by other political figures in more recent years.

But I’m not impressed. First, we have no idea what Trump’s tax rate was in other years. So the people defending Trump on that basis may wind up with egg on their face if tax returns from other years ever get published.

Second, why is it a good thing that Trump paid so much tax? I realize I’m a curmudgeonly libertarian, but I was one of the people who applauded Trump for saying that he does everything possible to minimize the amount of money he turns over to the IRS. As far as I’m concerned, he failed in 2005.

But let’s set politics aside and focus on the fact that Trump coughed up $38 million to the IRS in 2005. If that’s representative of what he pays every year (and I realize that’s a big “if”), my main thought is that he should move to Italy.

Yes, I realize that sounds crazy given Italy’s awful fiscal system and grim outlook. But there’s actually a new special tax regime to lure wealthy foreigners. Regardless of their income, rich people who move to Italy from other nations can pay a flat amount of €100,000 every year. Note that we’re talking about a flat amount, not a flat rate.

Here’s how the reform was characterized by an Asian news outlet.

Italy on Wednesday (Mar 8) introduced a flat tax for wealthy foreigners in a bid to compete with similar incentives offered in Britain and Spain, which have successfully attracted a slew of rich footballers and entertainers. The new flat rate tax of €100,000 (US$105,000) a year will apply to all worldwide income for foreigners who declare Italy to be their residency for tax purposes.

Here’s how Bloomberg/BNAdescribed the new initiative.

Italy unveiled a plan to allow the ultra-wealthy willing to take up residency in the country to pay an annual “flat tax” of 100,000 euros ($105,000) regardless of their level of income. A former Italian tax official told Bloomberg BNA the initiative is an attempt to entice high-net-worth individuals based in the U.K. to set up residency in Italy… Individuals paying the flat tax can add family members for an additional 25,000 euros ($26,250) each. The local media speculated that the measure would attract at least 1,000 high-income individuals.

Think about this from Donald Trump’s perspective. Would he rather pay $38 million to the ghouls at the IRS, or would he rather make an annual payment of €100,000 (plus another €50,000 for his wife and youngest son) to the Agenzia Entrate?

Seems like a no-brainer to me, especially since Italy is one of the most beautiful nations in the world. Like France, it’s not a place where it’s easy to become rich, but it’s a great place to live if you already have money.

But if Trump prefers cold rain over Mediterranean sunshine, he could also pick the Isle of Man for his new home.

There are no capital gains, inheritance tax or stamp duty, and personal income tax has a 10% standard rate and 20% higher rate.  In addition there is a tax cap on total income payable of £125,000 per person, which has encouraged a steady flow of wealthy individuals and families to settle on the Island.

Though there are other options, as David Schrieberg explained for Forbes.

Italy is not exactly breaking new ground here. Various countries including Portugal, Malta, Cyprus and Ireland have been chasing high net worth individuals with various incentives. In 2014, some 60% of Swiss voters rejected a Socialist Party bid to end a 152-year-old tax break through which an estimated 5,600 wealthy foreigners pay a single lump sum similar to the new Italian regime.

Though all of these options are inferior to Monaco, where rich people (and everyone else) don’t pay any income tax. Same with the Cayman Islands and Bermuda. And don’t forget Vanuatu.

If you think all of this sounds too good to be true, you’re right. At least for Donald Trump and other Americans. The United States has a very onerous worldwide tax system based on citizenship.

In other words, unlike folks in the rest of the world, Americans have to give up their passports in order to benefit from these attractive options. And the IRS insists that such people pay a Soviet-style exit tax on their way out the door.