For the five years this blog has existed, I have written about my favorite car I don’t own, the Corvette, including such minutiae as its too-rare roles on movies and TV.

(Except for “Corvette Summer,” which did obscene things to one C3, including removing the hidden headlights, installing an asymmetrical hood scoop, and converting it to right-hand drive. The horror. The horror.)

With National Corvette Day (June 30) coming up, I found these photos on Facebook:

That is, of course, Jimi Hendrix, who reportedly owned two Corvettes, a blue 1968 that he wrecked, replaced by a 1969. Hendrix and guitarist Jeff Beck reportedly drove around New York despite Hendrix’s lack of driver’s license. One wonders if Hendrix complained about …

Hendrix is by no means the most famous Corvette owner. Politically speaking there is Vice President Joe Biden …

… whose infatuation with the C7 when he got to see one …

… and brief consideration of a presidential run prompted this: 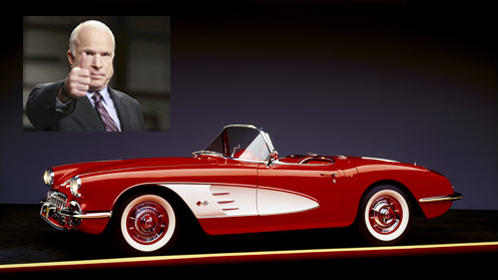 … who was following in the footsteps of his predecessor, Barry Goldwater.

(Which is interesting in Biden’s case since his party believes human activities such as driving are ruining the climate. Biden owns a Corvette, but Biden’s party does not think you should be allowed to drive.)

What other famous people had or have the style and taste to own Corvettes? (Including this long list from A — Def Leppard drummer Rick Allen, whose Vette and arm had unfortunate demises — to Y — country singer Dwight Yoakam.) These photos are brought to you by numerous online sources:

John Wayne owned a C1, though for someone 6-foot-4 it was a long way down to get in and out.

Since the days of the Mercury missions, astronauts have been getting Corvettes for $1 per year.

It’s not clear if Steve McQueen owned this C2 or just drove it for a Sports Illustrated story (he owned an earlier Corvette until his first wife traded it in for a Lincoln Continental), but he was quite impressed with it after driving it at Riverside International Raceway in California:

Other than the Ferrari, it was the best car I drove at Riverside. And let’s face it, it went out the door at $5,500 instead of $14,000. It had the big 427-cubic-inch turbocharged engine, and the four-speed gearbox, the stiffer suspension, short steering, and they were running low-silhouette racing tires on it. No question, it’s a brute, a terribly quick car. It must be one of the fastest production engines you can buy for that kind of money.

I was doing a notch over 140 mph in it and could have gone faster. What else would Captain James T. Kirk drive?

Charlton Heston owned not merely a Corvette, but a 1990 ZR-1 with the 32-valve V-8 built by Mercury Marine. (Perhaps he’s saying here “Get your paws off my Corvette, you damn dirty ape!”) This 1970 Corvette was built for Farrah Fawcett by car customizer George Barris. Plus points for the color and proper transmission; minus points for shag carpeting and the headlights. Imagine driving and trying to dial a number on your mobile rotary phone.

Bruce Springsteen drove not a pink Cadillac, but a black C1 in New Jersey …

Before he was the Terminator and the Governator, UW-Superior’s most famous graduate, Arnold Schwarzenegger, owned a C3. (I wonder how he fit in it.)

Paul McCartney owns this C5 convertible. (Think he’s Hell on Wheels in it?)

Jay Leno may be Hollywood’s biggest car collector. Among the cars he owns is one powered by a World War II fighter plane engine.

This C2 is owned by actor/singer Rick Springfield. (If it breaks down do you think he tells the car that I’ve done everything for you?)

Chevrolet endorser Michael Jordan somehow fit his 6-foot-6 self into this C4.

Robert Downey Jr. owns this C2, and what an outstanding color it is.

According to Volvette this fine C3 is owned by actor Matthew McConaughey.

One of these links also links to a story about someone who has owned a C2 for 45 years. Which brings up a regret, which I regret to bring up (get it?) because regrets are generally futile, since you can’t change the past. I do wish I had gotten a Corvette sometime in my pre-child or immediate post-college years, though how much Corvette I could have afforded at any point is an open question, along with the point about the impracticality of owning a two-seat car without trunk (in C2 and most C3 years) in a state with 14-month winters. Still, the amount of time I have to ever own a Corvette is slipping away since, to quote the Gospel of Matthew, none of us knows the hour or day when we will be driven to our final destination.

I once took an online challenge of equipping a new Corvette without breaking a magic price level. Because I’m a fan of the T-top or Targa top and hidden headlights, but find practicality problems with convertibles, and because the first Corvette I remember seeing (a neighbor’s) was a 1970, my interest in Corvettes tends to start with the C3 and end at the C5. (Though I would take a ’65 or later C2, and I’m not that much of a fan of C4s due to the hideous instrument cluster, though that can be replaced by proper dials with needles.) The C3 is the Corvette I envision when someone says “Corvette,” but the C5 is more practical given its larger interior and hatchback.

It should be obvious that it must have a manual transmission. Air conditioning would be nice as long as it works. A quality sound system is essential, though that can be fixed readily enough in the aftermarket.