While looking for something else, I came upon this from Curbside Classic:

OK, you say, it’s a station wagon. And it’s a Chevrolet. So?

So … this is a reasonable facsimile of the last of my parents’ station wagons, a 1969 Chevy Nomad. It’s a car I remember well from the perspective of the left back seat, where I sat on trips to Minnesota, Door County, Chicago, the Northwoods, and school, church, the grandparents and so on.

Curbside Classics says about this Nomad:

In 1955, the Nomad Wagon was the most expensive Chevrolet by a healthy margin, and marked the beginning of Chevy’s expansion into the mid-priced market. By 1968, that storied name was recycled on the lowest-trim Chevelle wagons. It’s a familiar cycle, that never seemed to end, until the name was pushed all the way off the bottom rung of the ladder. …

The Nomad stayed on as the top-line full-size Chevrolet wagon through 1961, before Chevy reverted back to the sedan-equivalent names, for a few year’s hiatus. By 1968, the wagon names were back, but now Nomad not only suddenly dropped a size, but a lot of prestige. It now denoted the lowest trim Chevelle wagons. Got to keep the GM Naming Department busy!

Having spent too much time researching this at oldcarbrochures, I’m actually more confused than ever, because the 1969 Chevelle brochure describes the Nomad as the bottom-level stripper, without any chrome trim. Our car looks like it is more of a Greenbrier level trim. Oh well.

Never mind; trying to unravel the deep thinking that came out of the Naming Department is futile. And whether this is a genuine Nomad or not, I will leave to other to unravel. I’m confused enough.

The Nomad most car buffs think of would be one of the revered Tri-5s, with, you’ll notice, two, not four, doors … 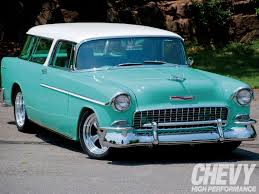 … though as noted it was applied to other Chevy wagons until 1973, and then to a Chevy van with windows and seats, as opposed to a panel van.

The family of midsized Chevy station wagons spanned from the fake-woodgrain-trimmed Concours Estate (big photo) to the red Nomad in the corner:

Our 1969 Nomad was LeMans Blue (that is, bright blue) with a medium blue interior, including clear plastic dimpled seat covers in the back seat. Said seat covers were cold in the winter and hot in the summer, with the added summertime bonus of leaving dimples on the back of your legs if you wore shorts. It was purchased from the former Chevy dealer in Oregon after a couple of Chevy Novas, the last of which was a ’66 station wagon.

I assume my parents decided they needed more room, so they upgraded to the midsized Nomad. I can list every one of our Nomad’s options:

You may notice that the list does not include air conditioning. We didn’t have a car with air until our 1975 Caprice, which replaced the Nomad when evidently my parents decided they had had enough of station wagons. Today it’s nearly impossible to find a car without air conditioning standard, though not all the A/C units work, since they don’t generally cool without refrigerant.

Our Nomad was the middle of three of my acquaintance. The other two — a black ’68 and a blue ’71 — were owned by my grandparents. I remember my grandmother asking their six-year-old grandson which color their new car should be, and I of course said the blue of our wagon. And so imagine my surprise when they next visited, in their LeMans Blue Nomad.

The significance of the 1969 Nomad, by the way, was that all GM cars except the Corvair had …

… head restraints on the outboard front seats and the ignition switch moved from the dashboard to the steering column, to lock the steering wheel when the car was in Park as an anti-theft device. The federal government made those mandatory in 1970; GM made those design changes a year ahead of Ford, Chrysler and AMC, except on the Corvair, which GM was about to kill. That steering wheel, a new-for-1969 design, was used by Chevrolet (though the horn buttons were changed) until 1978, when Chevy went to the strange A-frame wheel.

In my memory, we had only one bad experience with the Nomad. It was, ironically (note to self: Do a search for the number of times “ironic” and variants thereof are used on this blog), when it was brand new. We were on a trip to visit our Polish relatives in Minnesota (which included an attempt by a peacock at the Como Park Zoo in St. Paul to enjoy my middle finger as a snack, but that’s another story) when the engine suddenly began ominously (by an easily upset four-year-old’s definition) knocking. Dad took the knocking Nomad to a Chevy dealer somewhere in central Minnesota, where he was told his brand new Nomad needed a new engine. (I don’t know whether the car was still under warranty, or if there were new-car warranties of any use in those days.) Dad’s alternative was to buy gas from a different source than the last tank (a former brand called Consolidated). Problem solved.

It should be pointed out here that the Nomad really is not the first station wagon one thinks of from the ’70s. If you were to say “think of a mid-sized GM station wagon from 1969,” the Olds Vista Cruiser (owned by two of my grade-school classmates’ families) probably would come to mind …

… but not with any Chevy or Pontiac wagon.

The comments on the Curbside Classics post includes a discussion of the styling of this Nomad. Which kind of misses the point of a station wagon — its utility. The Nomad only had two seats, while higher-level wagons offered the third seat, but we always seemed to manage to get as many people into the car as was needed. Our Springer Spaniel, Curly, rode in the back as well on occasion. Two-doors look cool, two-door wagons look cool, and the original Nomad looks really cool, but two-doors can be a pain if you have more than one passenger.

The Nomad was a midsized car for 1969. When GM downsized its full-sized cars in 1977, the B-body — Chevy Impala and Caprice, Pontiac Catalina and Bonneville, Olds Delta 88 and Buick LeSabre — became the size of the A-bodies — Cbevy Malibu (including this Nomad) and Monte Carlo, Pontiac LeMans and Grand Prix, Olds Cutlass Supreme and Buick Century and Regal. That was the size of the last GM full-size wagons, from 1977 until 1996.

Until 1988, the same V-8 in our Nomad was the top V-8 in the downsized Chevys. That same V-8, with a two-barrel carburetor instead of the Nomad’s four-barrel carburetor, powered our Caprice, adequately. (The 2-barrel was rated at only 145 horsepower, but at 250 lb-ft of torque and a 3.08 rear axle, acceleration was deceptively good. Replacing the 2-barrel with a 4-barrel would have improved performance and probably fuel economy too, assuming the driver could keep his foot off the gas to activate the secondaries. And Chevy 350s are basically impossible to kill.)

The Nomad name remains legendary at Chevrolet, evidence of which is that Chevy occasionally trots out Nomad concepts:

One of these concepts had the five-cylinder engine formerly found in the Colorado compact pickup. You may notice the cleverly disguised rear door on the first of these two concepts; it was supposed to slide, in a hybrid of a van’s sliding side door and an extended-cab pickup truck’s back doors, I suppose. That seems like yet another of GM’s answers-in-search-of-questions like the ’71–76 big wagons’ clamshell tailgate.

One thought on “Happy about your car? Nomad.”