Unlike the Corvette, one of which I have never owned (because life is unfair), I have owned a Mustang. It was a red ’65 convertible.

And it went as fast as my legs could propel it on the sidewalk.

My other bit of Mustang affinity, I guess, comes from the fact that I toured a Ford plant on a family vacation in the summer of 1976, where Mustang IIs were being assembled.

The parents of one of my fellow Boy Scouts owned a Mustang II, so I occasionally sat in the back of that, as well as another Scouts’ parents car on which the Mustang II was based, a Pinto.

Then there’s the Mustang’s starring role in the greatest movie car chase of all time, from my favorite movie, “Bullitt”:

I’ve also driven a couple of Mustangs. My oldest son’s first ride in a convertible was in a coworker’s red Mustang. Another coworker let me drive his Mustang, a V-8 and five-speed in what might best be described as Tornado Warning Green, and every time I saw him he kept trying to sell it to me.

The Mustang is one of the few cars that can be said to have created an entire class of car. The Plymouth Barracuda came out two weeks before the Mustang, but the Mustang significantly outsold the Barracuda. (The Barracuda died in 1974, and though Dodge brought back the Challenger, Plymouth isn’t bringing back the Barracuda, since Plymouth is now in the car brand graveyard.) The two were the first of the class known as the “pony car” — a (relatively) small car with a (relatively) powerful available engine and other sporty accouterments. From the Mustang came the original Mercury Cougar. More importantly, though, the Mustang prompted the creation of (in rough chronological order) the Chevrolet Camaro, Pontiac Firebird, AMC Javelin and AMX, and Dodge Challenger (the cousin to the Barracuda).

Unlike most cars of its kind, Ford has never attempted to do anything but sell every last Mustang someone was willing to buy. That and the fact that the Mustang has been built every year since 1964½ (unlike the Camaro, which started in 1967 and wasn’t built between 2003 and 2007), explains why there are more Mustangs still on the road than any other comparable car.

The original Mustang was built with Ford Falcon parts, which meant it had recirculating-ball steering, drum brakes and a standard six-cylinder engine. The fact the car was made from existing parts instead of a completely new design helped make it affordable. It’s not as if Ford did anything unduly cheap; the Camaro, its traditional biggest competitor, used many parts of the Chevy Nova, the Barracuda was based on the Plymouth Valiant, and the Javelin used the platform of the Rambler American (which itself later became the AMC Hornet and Gremlin). In each case, styling, engineering upgrades and more appropriate interiors turned the plebeian compacts into something sporting and desirable.

The additional genius of the Mustang is that, for most of its life, owners have been able to equip it as anything from mild-mannered (you could get a six-cylinder and automatic in 1965 and now) to snarling beast (the Boss 429 was rated at 375 horsepower but was actually closer to 500 horsepower; today’s Shelby GT 500 is rated at 550 horsepower). The Mustang was raced down the quarter-mile and on road tracks as part of the late great Trans Am series.

The Mustang has had to serve as Ford’s Camaro and Corvette since Ford hasn’t built a car like the Corvette. (The de Tomaso Pantera was sold by Lincoln–Mercury dealers from 1971 to 1975, about 5,000 of them, and the Ford GT was sold in 2005 and 2006, all 4,038 of them. Other than 1997, a partial year of production for the new C5, Chevrolet hasn’t sold that few Corvettes in one year since 1956.) It’s always had more utility than the Corvette with its back seat and either trunk or hatchback in the case of the Mustang II and the Fox-body Mustang of 1979–93.

I am told that Mustang aficionados argue whether or not a Mustang II deserves to be considered a Mustang. It replaced the 1971–73 Mustang that, like many cars, had grown fat. It would have been interesting to see Ford design the early ’70s Mustangs like its Mustang Milano show car:

Yet the early ’70s Mustangs were immortalized in two films: “Diamonds Are Forever” …

What some call the “Mustang III,” the 1979–93 iteration, seems to lack respect in some enthusiast quarters too. That era Mustang (and the sister Mercury Capri of that era) are not the most exciting-looking cars, perhaps, and no one will remember ’80s cars fondly anyway. (Cars of the ’80s featured the first generation of computer controls, which Detroit sent out into the marketplace without their being fully sorted out.) And yet the Mustang III had some of the most powerful motors of their era, handled well (particularly with the Michelin TRX tire package), and, with the hatchback, actually had some utility. The sedan version had enough speed for police departments, including the Wisconsin State Patrol, to use them (as well as Camaros) as squad cars.

After nearly replacing the Mustang with the Probe (which had a turbo four with the worst torque steer I’ve ever experienced, or a V-6), Ford redesigned the Mustang in 1994 with styling cues that harkened back somewhat to the original Mustangs. That worked until 2005, when the next Mustang looked like a modernized version of the 1967–70 Mustangs.

Ford had a contest on its website to create your own Mustang (including colors and options Ford doesn’t offer). I tried to design mine to look as close as I could to the Bullitt Mustang, which lacks chrome trim.

The other one I tried to make look like my old convertible (minus the whitewalls, and I don’t remember the color of the top):

Ford also held a Twitter contest for the favorite Mustang based on these options, none of which included the Bullitt Mustangs, original or replicas: 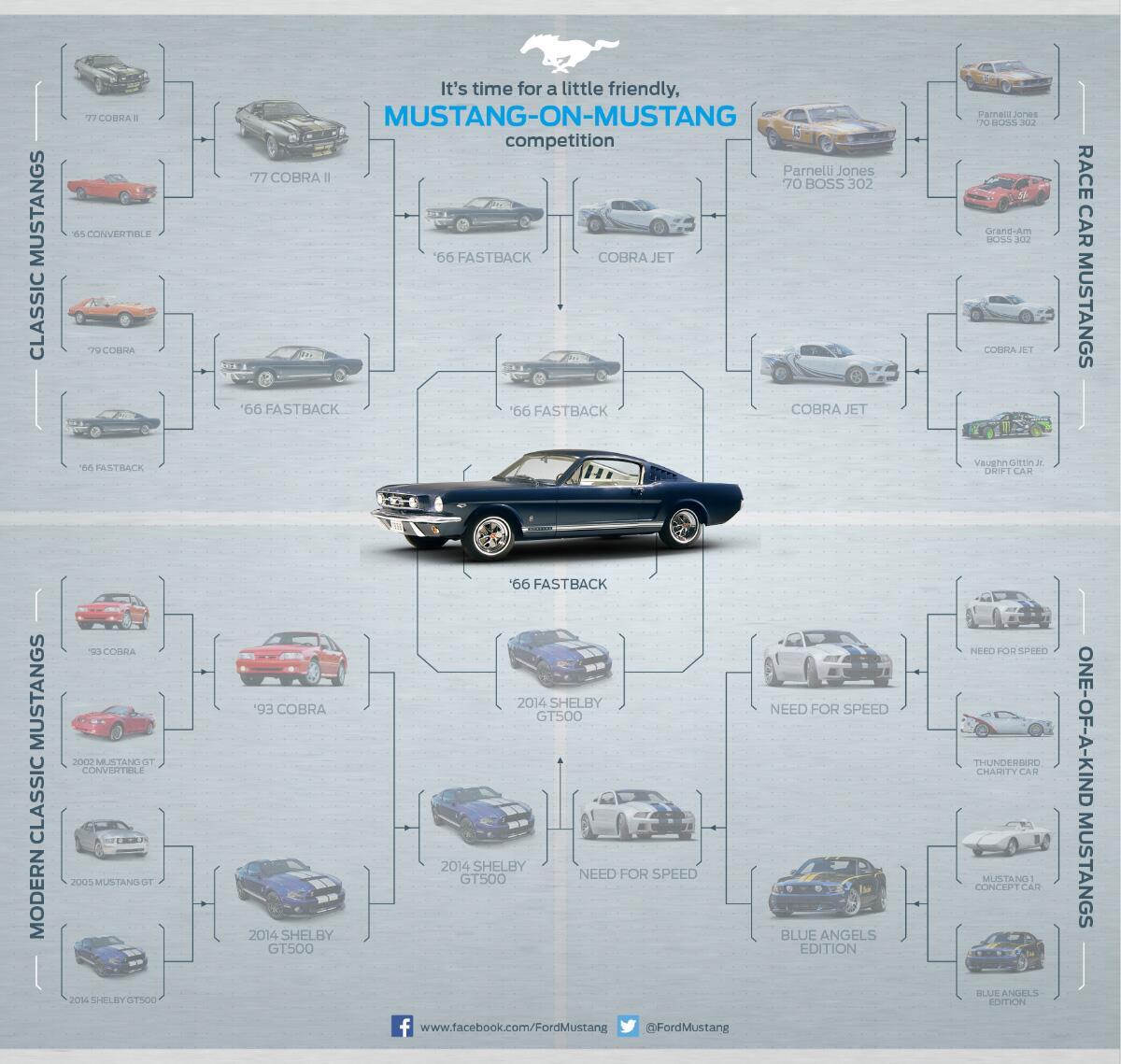 There was great sturm und drang a year ago when reports started circulating about the next Mustang looking little like historical Mustangs. And then the truth came out. You can see it in the flesh this fall.