The idea for this exercise came from a Motor Trend Classic story:

Envision this: You’re the editor of Motor Trend. And, naturally, you have lots of friends in automotive journalism. You see them at industry events, major auto shows, and press launches of important new vehicles, typically at exotic locations here in the U.S. and overseas. Now imagine inviting those friends to a bar after the first day of the New York auto show in April with these words: “Let’s design a dream car.” You’ll build a driveable version in less than six months, in time to be unveiled on a turntable in Los Angeles in November.

Sound improbable? Of course. But, believe it or not, this scenario transpired 45 years ago. Instead of New York, it was in London, England. The publication was The Daily Telegraph Magazine, and the editor was John Anstey. The car was a collaboration among auto journalists, Anstey, Jaguar, and the design house of Bertone, and was known as the 1967 Jaguar Bertone Pirana Coupe.

In March 1967, the increasingly powerful Anstey cooked up another wild scheme to promote his weekend magazine, gathering a group of motoring writers at that year’s Geneva motor show and asking them, in effect, “If you could build your dream car, what would it be?” The group of motoring scribes examined what was then the state-of-the-art in automotive design, culling elements from Aston Martin, Ferrari, Jaguar, Lamborghini, Lotus, and Maserati to come up with their ideal 2+2 Grand Touring coupe. But this was no mere pipe dream. After pushing the magazine’s senior management, Anstey actually obtained the budget to push the “dream coupe” vision forward. What’s more, he had the audacity to promise delivery of an actual car in just six months.

Sad to say, no such scenario presented itself when I was a business magazine editor. But the concept of this story was so captivating that I decided to create my own 2+2 as the one-man design team.

That, however, got waylaid by another idea — to create the ultimate sport utility vehicle. Not something like a Cadillac Escalade or Lincoln Navigator, but the original intention of the British Land Rover Range Rover — a vehicle that farmers could use for their daily work and take the family somewhere for the weekend. So it needs to be on- and off-road capable, but not Spartan.

Range Rover, you ask? According to Range Rover Classic, the original Range Rover was designed as a “Four-In-One car” …

… or, put another way in brochures …

… all by the definitions of 1970 Great Britain. (An “estate car” there is a station wagon here, but you knew that.) Today’s definition of “luxury motor car” generally does not include nonexistent air conditioning, rudimentary carpeting or a lack of automatic transmission choice, but none of those were available on the original Range Rover. Nor were four doors, until 1982.

The other inspiration is the Mercedes–Benz Geländewagen, developed by, of all people, the Shah of Iran. So obviously it had some military uses:

We’ll call our SUV the Cross Country, the former name of Rambler station wagons in the 1960s, because this SUV is intended to meet that purpose. What I have in mind bridges the gap between SUV and truck (with a specific retro design feature in mind), for those who might need either at some point.

(Unfortunately, since I can’t really draw, I have to describe, instead of show, what I have in mind.)

One goal here is to offer a few choices for the buyer. You can buy a Chevrolet Suburban, Ford Expedition or Jeep Grand Cherokee with any engine and transmission combination you like, as long as it’s a gas engine attached to an automatic transmission. GM and Ford no longer build pickups with manual transmissions, and the only Dodge — I mean Ram — you can buy with a proper transmission is the 3500 attached to a Cummins diesel.

The gas motor choice is GM’s LS3 E-Rod V-8, which is rated at 430 horsepower and 450 pound-feet of torque. Why 430 horsepower in an SUV? That’s 20 fewer horsepower than the answer-in-search-of-a-question Lamborghini LM002, the 12-cylinder four-door pickup.

The diesel choice is the Navistar Maxxforce 7, which has 300 horsepower and 660 pound-feet of torque. (The diesel was formerly used in Ford Super Duty pickups until Ford designed its own diesel. Having driven a Maxxforce-equipped moving truck, I am much more impressed with Navistar engines than with, say, Isuzu diesels.)

The manual transmission would be the ZF 6S700, which offers a low first gear and an overdrive sixth. The automatic would also be from ZF, the AS Tronic 700.

The Cross County would be a four-wheel-drive, not all-wheel-drive, vehicle most likely, for heavier-duty truck-like uses. I think independent front and rear suspension works better for handling, with (based on the Range Rover) lots of suspension travel built in, and, borrowing from the Corvette, magnetic shock absorbers with adjustable stiffness control inside the Cross Country.

Inside would have the usual SUV accouterments (air, stereo/navigation system, sunroof), with the extra proviso of a lot of gauges, which are always preferable to idiot lights. (The first Range Rovers had just a speedometer, fuel gauge and temperature gauge; the lack of tachometer is strange for a manual-transmission-only vehicle).

About that design feature: The first Range Rovers and G-wagons were two-doors. Four-doors are all they sell now. (G-wagons were available in two- and four-door versions and as convertibles.) You’d probably want at least an option for a third row of seats. But, you think to yourself, how do you get the utility of a pickup truck and the seating capacity of an SUV?

My first idea was to adapt the sliding roof design of the Studebaker Wagonaire and the GMC Envoy XUV. Those were huge failures in the marketplace, which is why despite seeming like a good idea, it apparently isn’t. 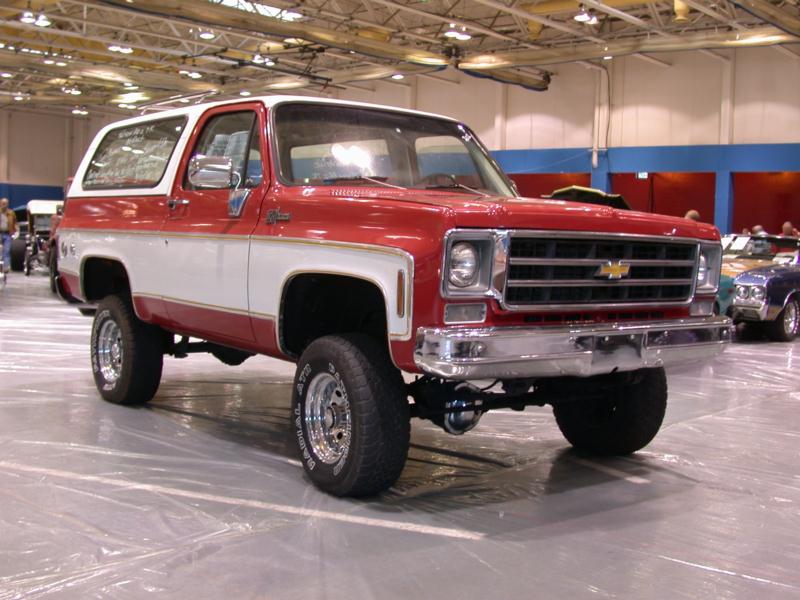 The roof of the first two generations (this is a 1977) of Chevrolet Blazers was removable. 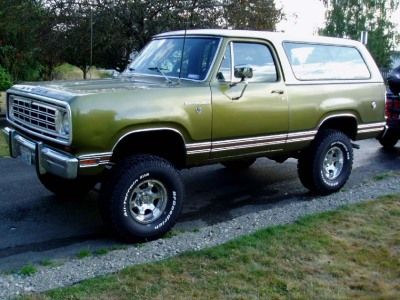 The same was the case with the first Dodge Ramchargers. That, I think, solves the pickup-vs.-SUV issue. If you need the extra space, take off the top.