This blog is not about past Corvette design proposals that did not come to fruition.

This is about how Chevrolet could have done a better job with the C7 Corvette, premiering later this year.

The outstanding Art and Colour Cars blog, which contributed to my popular (as in more than 2,800 views) Cadillac piece, improved the rear view of the C7.

The Split-Window is Back! For my take on the new C7 Corvette Stingray I went backwards in time a bit. To begin with I restored its traditional four round taillights. I gave it a much more traditional greenhouse rather than the new car’s first time and rather forced rear quarter windows. I also added a thin central paint-colored spine to the hatchglass, following the existing indented roof panel. I also edited the side vents so they’d fit better with the last several generations. Detail changes include moving the new Stingray logo to the B pillar and flattened out the new “winged” crossed flags

It’s not clear to me why rear quarter windows are a good idea on a two-seat car. I understand why the ’63 split-window C2 is so popular, because it was found only on the ’63 Vettes. Of course, there’s a reason only the ’63 Vettes had a split rear window — drivers couldn’t see out the back. Now, though, with the ability to use opaque-on-the-outside tinted-from-the-inside window coverings, this might make sense.

For my second take on the C7, I decided to keep the idea of a rear quarter window, but I reshaped it into a much simpler graphic. By bringing this new side window to a point, I referenced the Corvette supercar prototype from the 1970s, the mid-engined 4-Rotor.At the back  I created a set of aluminum-ringed quad circular taillight and replaced the new “V” crossed flags emblem with a “proper” set of flags from ’72 ‘Vette. I cut down on the visual height of the bodysides by using another ’70s styling trick: Argent colored rocker panels. The cool new Stingray logo has been moved to the B pillar when it’s noticeable every time you open the door.

The aforementioned rear quarter window is a clever tribute for the AstroVette. Either of these is an improvement from what Chevy is introducing, although I do have to give Chevy credit for one C7 feature:

What, you ask? A green Corvette? (To be precise, Lime Rock Green.) Aren’t all Corvettes red (as the book on the creation of the C5 claimed)?

No, there are green Corvettes: 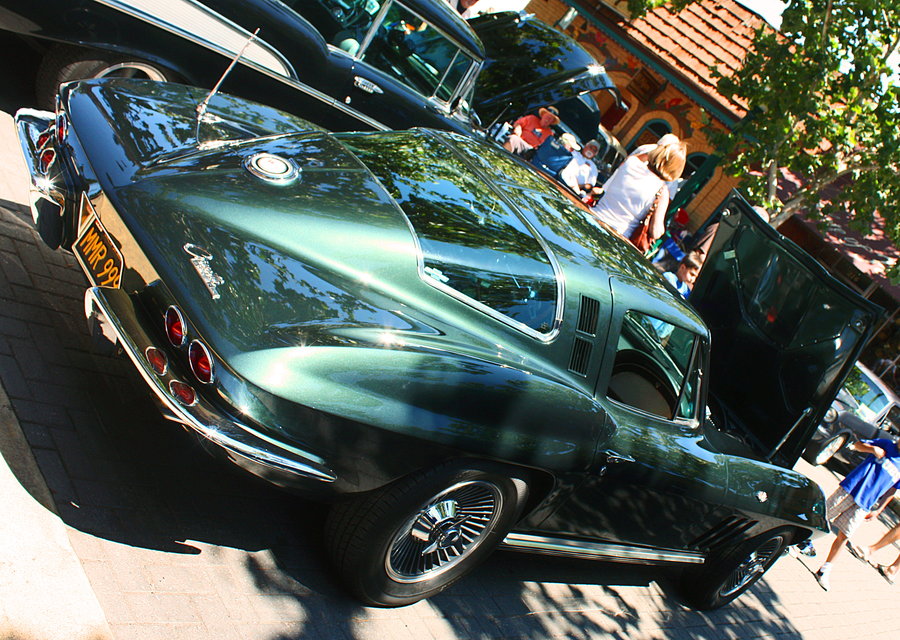 Those are all Corvettes in the standard-for-that-year green color. Most green Corvettes were dark green (for instance, “Glen Green” in 1965, “Fathom Green” in 1969, “Donnybrooke Green” one year later in the first Corvette I recall seeing down the street). Variations of lime started intruding in the early ’70s, but went the way of polyester disco outfits.

Some people decided to choose green after buying their cars, and some, unable to choose one shade of green, decided upon “all of the above”: