Back in the business magazine world, on the subject of community development efforts, I was fond of saying (because it’s true) that communities are organic — they either grow, or they shrink.

That statement also applies to churches, specifically the Episcopal Church, of which we have been members since 2000. (As you know, I am now the senior warden at ours in Ripon. And I remain a sinner.)

One place where the liberal–conservative split is manifesting itself is between the national church and some of its more conservative dioceses. The bishop of the Episcopal Diocese of South Carolina, the Rt. Rev. Mark J. Lawrence, narrated a slide show while addressing his diocese’s 221st annual convention. (Ponder that number: 221 annual conventions. But remember that the Episcopal Church split off from the Church of England the same year that George Washington took office as president. South Carolina is, remember, one of the original 13 states.)

The first of Lawrence’s slides, compiled by a national Episcopal Church statistician, is the church’s Average Sunday Attendance nationwide:

The next two slides show a trend. Green means growth (notice our own diocese in the northeast corner of Wisconsin), reddish tones do not: 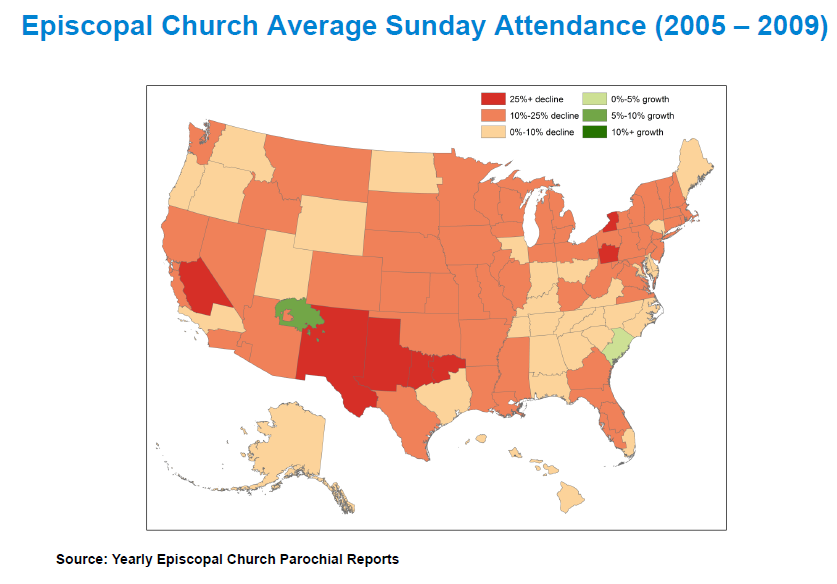 Beyond just going to church, there are other measures of Episcopalian involvement, or lack thereof:

Lawrence added what he called “additional measures of church vitality”:

The Episcopal Church is not unique in these shrinking numbers. They appear to apply to nearly every mainline Protestant church in this country. The only churches that appear to be growing are the nonaligned Protestant churches, of where there is one in Ripon, and the Roman Catholic Church. (Although the latter is certainly not growing in its number of priests.)

The two growing churches couldn’t seem more different. The criticism of the nonaligned (to use a secular phrase) churches is that their services are more entertainment than church, and that they lack the doctrine of faith of more established churches. (We Episcopalians have our Book of Common Prayer, most recently revised in 1979; the original version was created in 1789.) The Roman Catholic Church (about which I can speak with some authority as someone raised Catholic) has been in the process of taking steps backward from its Second Vatican Council reforms, and remains a top-down dictatorship that isn’t even based in this country. Church doctrine meets no one’s definition of “squishy,” although the number of Catholics that follow chapter and verse of every piece of Catholic doctrine (for instance, use of birth control) seems low.

The Episcopal Church has for decades based itself on the triangle of Scripture, tradition and reason. (Our rector compares Scripture to the big wheel on a tricycle, with reason and tradition the two back wheels.) Since 1801 the Episcopal Church has held that “Holy Scripture containeth all things necessary to salvation: so that whatsoever is not read therein, nor may be proved thereby, is not to be required of any man, that it should be believed as an article of the Faith, or be thought requisite or necessary to salvation.” Episcopalians will tell you that you need not shut off your brain in our church. In an increasingly educated society, one would think the Episcopal approach would be more appealing than apparently it is.

Why is that? Lawrence added something else that should give Episcopalians pause:

To argue as some conservatives have that these signs of institutional decline are caused entirely by the leaders of the Episcopal Church embracing of revisionist positions toward the Church’s teaching in such matters as the Fatherhood of God, the Uniqueness of Christ, liturgical innovations, the ordination of women, the blessing of same-sex unions, communion of the unbaptized, etc., is so misleading and reductionist as to be delusional.  To argue, however, that there is no relationship whatsoever is likewise delusional.

Frankly, the departure of so many of our clergy and lay leaders from the basics of Christian faith and practice has been nothing short of disastrous. The commitment to understand the ordination of women and now the blessing of same-sex unions, as fundamentally issues of justice—and not theology—has likewise been and will continue to be destructive of our common life as Episcopalians. If our more ardent critics will take an honest look at these statistics perhaps they might begin to understand why we have chosen to differentiate ourselves from the divisive decisions so many of the leaders of the Episcopal Church have embraced.

Just yesterday the Standing Liturgical Commission on Liturgy and Music has released the proposed rite for Same Sex Blessings that is to be voted on at General Convention this summer. Should it be approved for trial use in the church I believe it will be a signal and a departure from Christian teaching on the created order; on the nature of man and woman; on our salvific status in Jesus Christ; and from Christian Teaching on Marriage; and, make no mistake, it further raises the stakes for many of us here in South Carolina.

What further steps of differentiation will be called for on the far side of this summer’s General Convention we must ponder. … Maybe though, just maybe, having seen these statistics from TEC’s own statistician, our most vocal critics, both within the diocese and outside of it, can see more clearly why we have chosen to chart a different course than they. It is hardly an overstatement to suggest that the current brand of progressive theology and partisan social justice that the majority of leaders in the Episcopal Church seem to espouse is not an attractive option for most Americans who are searching for a church or seeking a faith for themselves and their children.

I’m still not a theologian, and I don’t agree with Lawrence on the specific point of ordaining women. (There is only a short distance between the idea that only priests should be men because Jesus Christ’s disciples were all men, and the Roman Catholic Church’s requirement that priests only be celibate men, which lacks Biblical justification.) The general trend, however, should be troubling to Episcopalians whether or not they consider themselves theological conservatives or liberals. And it’s hard to argue that there isn’t a connection between the national church’s veering away from the Bible and toward the direction of trendy social change, and the continuing shrinkage of our church. It’s one thing to argue whether or not government should recognize same-sex unions in some fashion. It’s another entirely to suggest that there is a Scriptural or traditional justification for them in a Christian church.

Lawrence’s last sentence is particularly damning of the direction of the national Episcopal Church and its trickle-down effect on local churches. (And I know a delegate to the national convention, which will be in Indianapolis this summer.) Every church, regardless of denomination, is looking to bring in the unchurched and young families. It would be interesting to know how well the nondenominational churches are in not merely bringing in the unchurched and young families, but keeping them and getting them involved. It would appear that the Episcopal Church’s efforts to get approval from the cultural elites (which by their nature will never approve of religion), or whatever is motivating church leadership, isn’t leading to church growth. I’m not sure the reason is revealed in the Book of Numbers, but the problem is certainly revealed in numbers.

4 thoughts on “The shrinking church”