A fellow former member of the UW Marching Band had a perfect three-word description for this past weekend: “Fear the beer!”

Indeed, it’s hard to imagine this past weekend could have gone any better for Wisconsin sports fans. The Brewers took a 2–0 National League Division Series lead by beating Arizona 4–1 Saturday and 9–4 Sunday. The Brewers can clinch their first National League Championship Series berth in their history by winning one of the next three NLDS games.

First, though, the Brewers. I listened to parts of both Brewers games on the radio. On a couple of instances, it sounded as if 76-year-old Brewers announcer Bob Uecker was going to expire on the air due to overexcitement. Uecker is concluding his 40th season calling Brewers games, and those 40 seasons have included far more bad baseball than today. So I’m particularly pleased that Mr. Baseball is getting to work in October, which is the point of baseball’s first six months. His 40 years of quality work (even if he doesn’t announce the score as often as he should) have earned him the right to announce the Brewers as long as he wants.

Announcing bad teams is not as fun as announcing good teams. (Duh.) Ripon High School’s season is ending in two weeks; in fact, the Tigers have yet to win a game this season. There have been just two running-clock games (and ironically both lasted at least as long as regular games, one due to the lights going out and one due to a lengthy delay waiting for an out-of-town ambulance to arrive for an injured player), and Friday’s was a good game, a 13–6 loss to 40-year-long rival Winneconne.

But bad high school football seasons are just nine games, and bad high school basketball seasons are 23 games (22 regular-season games plus, most likely, one playoff game). A bad baseball season is 162 regular-season games — at least 1,400 innings — plus however many exhibition games the network decides to broadcast. When the All-Star Game arrives and your team is already out of the race, the end of the season must look a long way away, particularly if, as with Uecker, you announce only baseball — no weekend getaways to do football.

But at Miller Park, who’s thinking of football? Well, truth be told, there is divided attention, since baseball scheduled game 2 at the same approximate time as the Broncos–Packers game. (In 1982, when the Brewers went to the World Series, the Packers weren’t playing because of the NFL strike, and in 2008, when the Brewers were last in the playoffs, the Packers were not very good.) So there was manic channel-flipping in Ripon between channel 5 0r 9 (CBS, which carried the game) and channel 35 (TBS).

(That situation, by the way, demonstrates how poorly run Major League Baseball remains in media. Almost half of Americans cannot watch any Division Series or the National League Championship Series because they are on TBS and not on broadcast TV. NFL games on ESPN or the NFL Network are required to be carried on local TV in the participants’ home markets. Major League Baseball has no such contract stipulation, so Brewers fans without cable or satellite TV will get to see the Brewers only if they reach the World Series.)

Anyway, the Brewers had quality pitching Saturday (something exceedingly rare in the history of that franchise) and big hitting Sunday, with a five-run sixth inning ignited by, of all things, a suicide squeeze, something to gladden the hearts of those who believe the Brewers are incapable of fundamental baseball. While comebacks are fun (such as in 1982, when the Brewers dropped the first two games of the American League Championship Series in California only to win the last three in Milwaukee), it is better to make the other team try to come back, regardless of sport.

And Saturday night’s Camp Randall stomping (my favorite headline: “Forlorn Corn”) was a come-from-behind 48–17 win, a thrashing so embarrassing to Nebraska coach Bo Pelini that he actually apologized to Cornhusker fans. There is a certain arrogance in assuming you should roll to victory against a fundamentally sound team in what has become one of the most hostile places to play in college football. And it looked good early for the Cornhuskers until quarterback Taylor Martinez did his best Jay Cutler impression (as in three interception), which the Badgers compounded by scoring touchdowns on each. So 21 points of the 31-point margin started in Martinez’s right hand.

Martinez’s counterpart, Russell Wilson, continues to amaze. My favorite play was his touchdown run that started with a fake handoff to the right side, with Wilson rolling out to the left side. After the faked handoff, Wilson slowed down as if he had handed off the ball so his work was done, only to take off with the ball. Pelini had a long sideline conversation afterward with the poor Nebraska defender whom Wilson faked out of his compression shorts.

Wilson might be the best quarterback Wisconsin has ever had, and the hyperbole in a comment about someone who has played exactly four games is starting to fade. No UW quarterback in memory has had the combination of running ability and throwing ability that Wilson has. (You’d have to put together two or three recent quarterbacks to equal Wilson’s skills.) Opponents are forced to pick their poison — defend against UW’s vaunted run game and have Wilson pick them apart, or defend against the pass and have UW run them over like a road grader flattens asphalt.

Meanwhile, Wilson’s Packer counterpart, Aaron Rodgers, now appears able to throw a touchdown pass whenever he wants, and to whomever he wants. On Sunday, Rodgers’ four touchdown passes were to four different receivers. And none were of the methodical carve-up-the-defense variety. Flick, zip, cue up “Bang the Drum All Day.” As the Milwaukee Journal Sentinel’s Tyler Dunne put it, “This regular-season game quickly resembled a 7-on-7 tournament with Rodgers needling passes into every window of the offense.”

This season, of course, featured no between-season minicamps and hastily assembled training camps due to the NFL lockout. This season has also featured high-scoring and fun games to watch. Perhaps the NFL and the NFL Players Association can arrange future lockouts.

This season is starting to look like the 1996, 1997 and 2010 seasons in one aspect: The Nemesis. In 1996, the Packers had to fight off the Vikings to win the NFC Central before their march to New Orleans. The next year, the Packers had to beat up-and-coming Tampa Bay three times to return to the Super Bowl. And in 2010, the Packers had to get past Da Bears twice to get to Super Bowl XLV. This year’s Nemesis is Detroit, which improbably came back to defeat Dallas and remain as undefeated as the Packers. And they meet twice in the last part of the season, starting on Thanksgiving Day.

Long-time Wisconsin sports fans know that sports success is not our usual lot in life. While rooting for the Packers, Badgers or Brewers hasn’t been the exercise in futility rooting for the Cubs is, history says a season where each team is winning is rare. The more normal circumstance has been, say, 1986, when the Badgers were 3–9, the Packers were 4–12 and the Brewers were 77–84. There have been other years where one team was good but the other two weren’t, and there have been years where two were good but the third wasn’t. Before, it seems, this year, the best season may have been 1982, when the Brewers made the World Series, the Badgers won their first bowl game, and the Packers reached the second round of the playoffs. But now, we have, thanks to someone on Facebook: 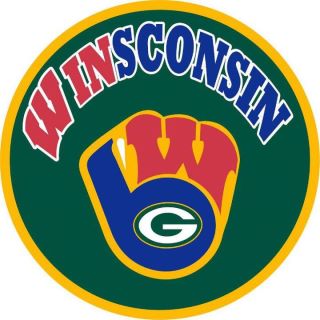 I can say unequivocally, though, that this weekend will not be repeated next weekend.

The Badgers are off.

3 thoughts on “Your Brewers/Badgers/Packers blog”