Today begins school in Ripon and in most of Wisconsin. So parents breathe a sigh of relief that the kids are finally out of the house, until they realize that now they have to get their children to their various after-school activities.

This has been an unusual summer for one glaring reason, and yet it hasn’t been unusual in the day-to-day things. All three kids went to summer school. All three played baseball (T-ball in Shaena’s case). All three went to church camp, Shaena with me. (Which was not how I expected to spend her summer vacation, although those three days were far from summerlike.) All three visited their grandparents, and we got back reports that made us wonder whose children they had. We didn’t go on vacation, in part for the aforementioned glaring reason, but I’m not sure the family is up to being locked inside a van for extended periods of time anyway. More than once, in fact, I’ve wondered how everyone would have gotten to everything had there been two working parents, particularly with the occasional added complication of orthodontist and veterinarian appointments. 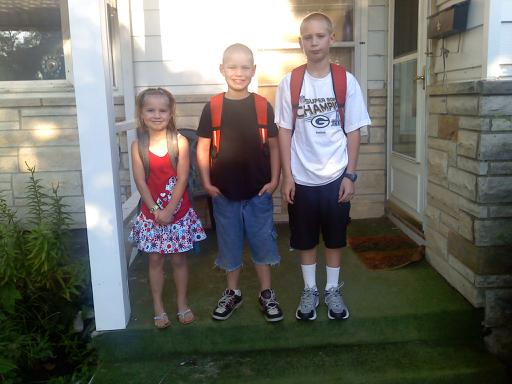 But that’s so yesterday. Our family planning skills are so keen that this year we have three children going to three different schools — Ripon Middle School and Ripon’s 3–5 and K–2 schools — which will be the case for the next two school years starting today. The oldest two are going to new schools this year, and that brings along its one-day touch of anxiety. 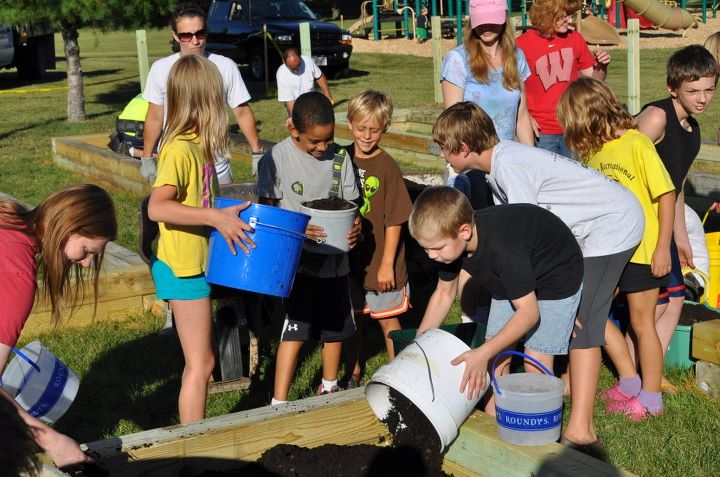 Ripon has something that didn’t exist when we were  in school — charter schools, which use project-based learning for kids who can learn better by doing. Michael was in Quest in its first year, and Dylan starts there today, although Quest has already put him to work building flower beds. I was elected to Quest’s board, because I was one of two candidates for two positions. I made the mistake of showing up for the first meeting 20 minutes late, so I’m the board’s president-elect.

The particular concern is that three-year horror known as middle school. My three years at Schenk Middle School were my three worst in any level of education by an order of magnitude. I had things stolen from me. I was on the losing end of altercations from people who decided for whatever reason that I should be their target. I got good grades, but good grades seemed to be a negative in middle school. I suddenly noticed interesting things about girls, but they of course wouldn’t give me the time of day. 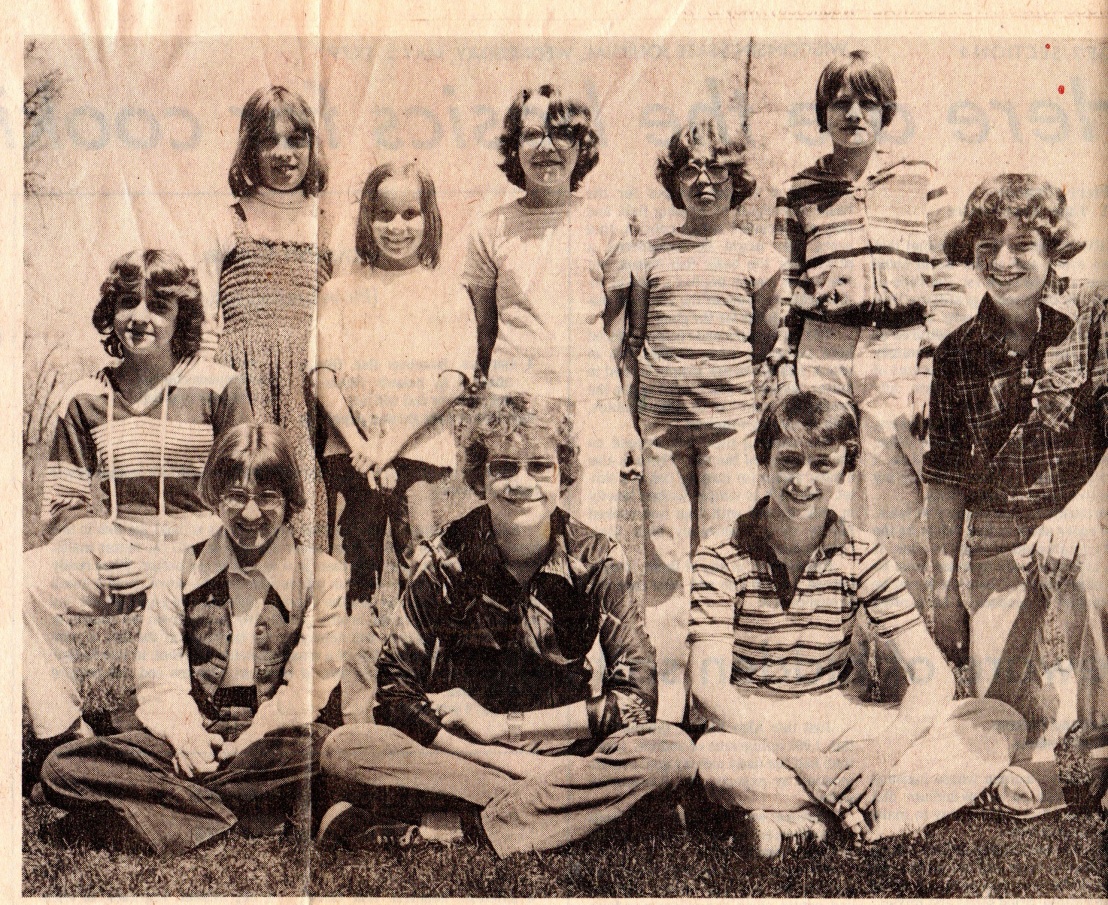 This is a photo of the top 10 finishers at the 1979 Madison City Spelling Bee. The kid on the lower right finished in second place. When he found out I was on Facebook, he sent this photo to me, along with the next day’s story … 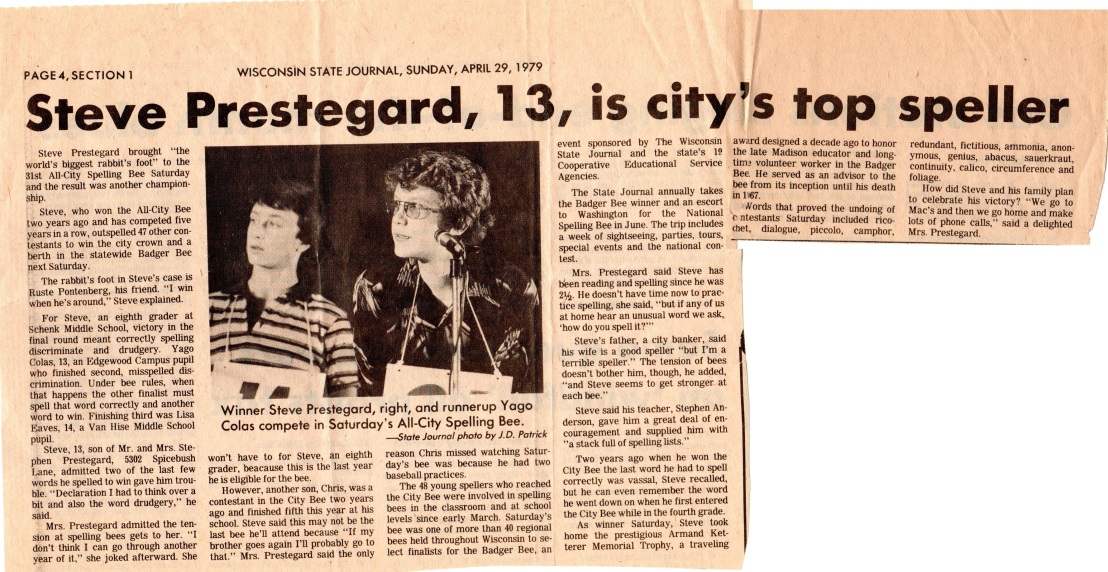 I’m not sure what one does with a spelling bee title, other than notice typos in newspapers. I went into journalism; Yago went into academia, although he is, sadly for him, a Michigan Wolverine.

I used to think I had a uniquely bad middle school experience. Then I thought Madison middle schools were uniquely bad experiences. (Schenk at the time looked like a bad mix of “West Side Story,” Charles Darwin’s Origin of Species and Lord of the Flies … until I saw East High School.) My current theory, which may be modified after our three children survive middle school, is similar to making a bad dish — how good the recipe is cannot be overcome by bad ingredients. They’re too old for elementary school, but they aren’t mature enough for high school. Their bodies are changing in ways their brains can’t understand. Sixth grade (full of, according to my middle school band teacher, “sick graders”) might be the time that children start to realize the world around them, particularly their own homes, aren’t places where everything is OK with a kiss and a cookie. And, contrary to what has been suggested elsewhere, you cannot take an 11-year-old and put him or her in suspended animation for three years. And I’m not sure you can tell a middle-schooler who can’t understand why the world has turned against him anything better than that you have to stick it out.

What also will be different this year, and not just in Ripon, is, or are, the teachers. News reports indicate a record number of teacher retirements from school systems, which usually is blamed on the restrictions on public employee collective bargaining passed by the Legislature earlier this year. Michael is starting his seventh year in the school district, and only two of his previous six teachers are still working in the school district. The decision to retire or not is up to the individual, of course. But as long as the state’s public and private universities continue to produce education graduates, teachers to replace retiring teachers will be in plentiful supply.

The only story that comes to mind about the first day of school is from my first day in high school. I got through homeroom and the first three class periods and by 11:10 a.m. was really hungry. In La Follette’s pre-block-scheduling days, La Follette had three lunch periods — one between third and fourth hour, one between fourth and fifth hour, and one in the middle of fourth hour. Since no one had told me when I was scheduled to have lunch, I decided that since I was hungry, it was time to eat. After lunch, I went to  my fourth-hour class discover that, no, I had the second lunch period, a conclusion I came to after I found the room dark and the door locked. Fortunately, there were no long-term academic repercussions. Unfortunately, after freshman year I had the last lunch period for the next three years.

The one sure thing is that, shortly after this new school year starts, students will have another song in mind: