Readers know I have been, shall we say, skeptical about the C8 Corvette, a mid-engine design GM is unfamiliar with, which lacks a proper (manual) transmission and is grossly overpriced.

A quarter-century ago, though, GM had an idea for the Corvette that would have been bigger, in one sense, than anything in the C8. R&T (the upgraded Road & Track, or something) tells the story:

The original Dodge Viper was a game-changer. With its outrageous proportions and massive 8.0-liter V-10 engine, it outclassed pretty much anything else out of Detroit at the time. Except maybe this one-off V-12-powered Corvette.

Chevy built this experimental Corvette in the early Nineties as its answer to the Viper, and it’s a beast. Called the ZR-12, it uses the C4-generation ZR-1 as a base. The entire nose was stretched to accommodate the 600 cubic-inch V-12, built by Ryan Falconer Racing Engines. The all-aluminum engine was rated at 686 hp and 680 lb-ft of torque when new—far more than the then-new Viper’s output of 400 horsepower and 450 lb-ft of torque.

Of course, the ZR-12 never made it to production. The sole example languished at GM’s Heritage center for a number of years before being moved to the Corvette Museum, where it currently resides, according to LSX Magazine. The car used to have side-pipes and a different set of wheels, but has since been converted into a more subtle specification.

The DtRockstar1 YouTube channel was lucky enough to get insider access to the Museum while the ZR-12 was started and driven around, giving us a chance to listen to the unique engine note (above). Unsurprisingly, it doesn’t sound like your average Corvette.

According to the always-accurate Wikipedia:

At any given time, three of the cylinders in a V12 engine are in their power stroke, which increases the smoothness of the power delivery by eliminating gaps between power pulses.

The weirdest V-12, perhaps, was GMC’s, and I have seen an example of one reported by Driving.ca:

When you think of a V12 engine, your mind runs immediately to the high-tech, rev-happy, screamers made by Ferrari and Lamborghini. But did you know that between 1960 and 1965 GMC made a V12 of their own? And it was the size of two Ferrari 599 V12s combined.

It’s outrageous now to think of a gasoline-powered semi-truck but, in the 1960s when fuel was cheaper, a sizeable percentage of operators preferred gasoline power. Chevrolet offered a heavy-duty version of its famous 427 V8 to truck operators, but GMC knew they could do one better. They needed an engine with cubic inches, and lots of them. So they took the basic design from their 5.7L V6 and made a monstrous 11.5L V12.

This was not just two V6s bolted or welded together. The V12 had its own block, cam, a special oil pan that held 15L of oil, and a special crankshaft that weighed 82 kilograms. The engine was an absolute monolith. It was 1.3 metres long and weighed more than 680 kg fully assembled. Due to its inherent weight and girth, it wasn’t an engine you could simply bolt into a Chevy C10 pickup and drive around in. It was installed in full-on semi-trucks, and also as standalone power units for irrigation. It was never installed into a passenger car or truck by GMC, but many hot-rodders have shoved it into service for hot rods, and custom pickup-trucks.

For all its size and displacement, the V12 wasn’t a horsepower king, it was made for torque. It made just 275 hp at 2,400 rpm but produced a freight-train-like 625-lb.-ft. of torque at just 2,100 rpm. If those numbers aren’t enough for you, a Florida-based shop called Thunder V12 will happily sell you a rebuilt one in any specification from bone stock to tractor-pull stormer. Prices start at US$10,800 for a complete engine, so get your chequebook ready. Beat-up originals can be found on eBay for around $5,000, but buyer beware as no more spare parts are being made for these beasts.

The GMC V12 was made between 1960 and 1965 and, in that time, they made about 5,000 of them. Nobody’s sure quite how many are left but most guess that there can’t be any more than 1,500 in semi-serviceable condition. After the big V12 ran out of production the writing was on the wall for gasoline-powered trucks. At 11.5L it remains one of the largest gas engines that ever powered a road vehicle, and we’ll never see a dinosaur like it again.

Except that, according to Fox News:

At least now you can.

A new Australian outfit called V12LS has created a 12-cylinder version of the venerable General Motors LS1 V8 and is putting it on sale.

The company started out by taking two LS blocks, lopping off a couple of cylinders and melding them together to create a V12, but has now developed its own single cast block that is compatible with many LS parts. The last time GM made its own V12 was the GMC “twin six” truck engine in 1966.

V12LS is currently offering a 9.0-liter crate engine with an iron block good for 717 hp for $35,000, but is working on an aluminum version. Various kits in different states of dress run from $21,300 for a basic builder package to a dyno-tested turnkey engine for $46,200.

Those prices include shipping to the USA.

For that matter, while GMC was producing V-12s, Cadillac was contemplating a V-12 for its new front-drive Eldorado personal luxury car. Caddy never built a V-12 Eldorado, but Popular Mechanics reported in 1988 that since BMW was developing a V-12, other luxury carmakers would, including Cadillac.

Cadillac worked to develop a V-12 with Lotus for its Solitaire concept car, the two-door version of its Voyagé concept car. 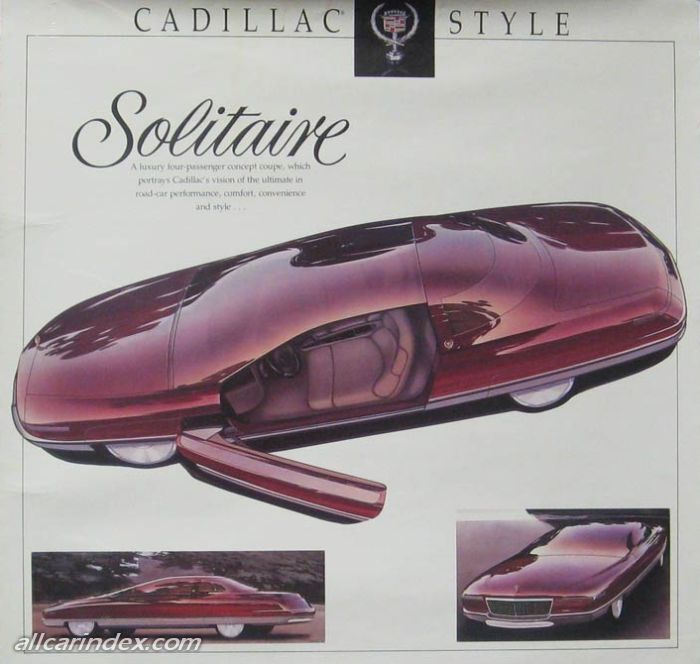 As an aficionado of big coupes, as you know, I would definitely drive that. 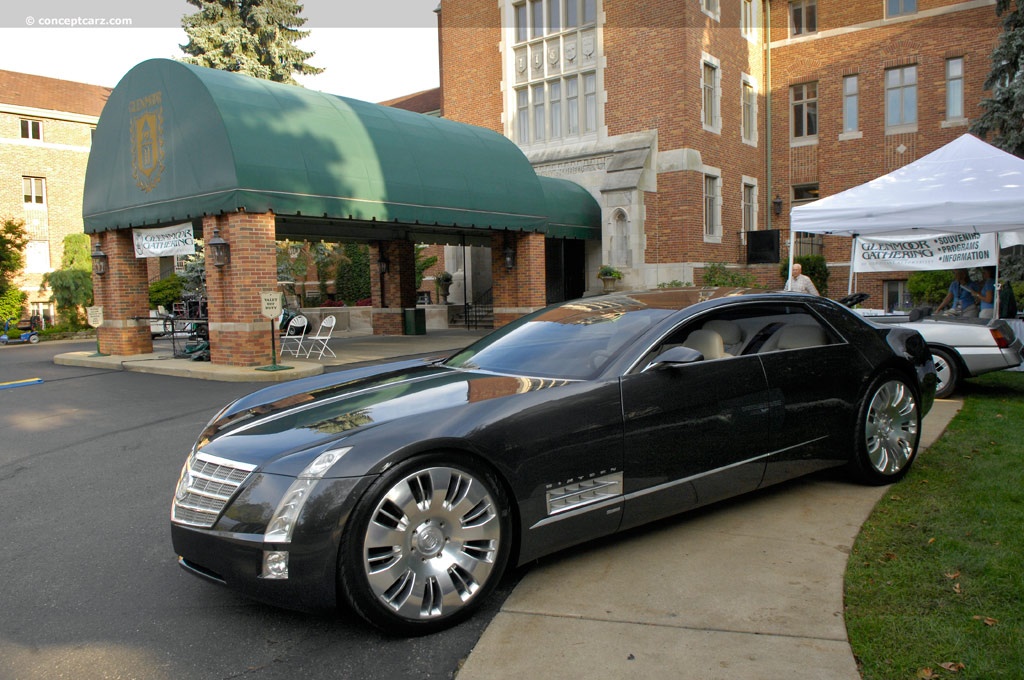 “Would you like to drive our 13.6-liter/1000-horsepower V-16 sedan?” asked GM’s Jeff Holland. Even though we knew there’d be extra-sticky driving rules and caveats regarding the $2 million concept’s mechanical polish, there was only one possible answer: “Duh.” Next thing we knew, we were piloting Caddy’s sexy showstopper around GM’s Milford, Michigan, Proving Ground. The Sixteen has been literally the biggest thing to roll onto the auto-show circuit this season. Bob Lutz, GM’s vice chairman of product development and chairman of GM North America, says it’s “a modern interpretation of everything that made Cadillac the standard of the world.” But is it merely a lavish reminder of a once-glorious past or a relevant vision of the future? Enough scene-setting. What’s it like to drive almost 19 feet and 16 cylinders of handbuilt concept car?

Remarkably sweet. Entering the Sixteen requires punching a button on the key fob or lightly squeezing a microswitch inside the top of the front door. There are no door handles to clutter the Sixteen’s lyrically curving body sides. Once inside, you’re surrounded by the rich scent of fine leather, glints from polished walnut and aluminum, and thick carpets–woven of silk, no less.

The driver’s leather bucket is large, soft, and gently contoured. It power-adjusts to a comfortable position, surprising given the lack of ergonomic work that usually goes into a turntable toy. Likewise, the leather and polished-wood steering wheel can be powered into a just-right spot, which lets you easily read the speedo/tachometer gauge in the center of the dash.

To start, step on the brake pedal and push a green button to the right of the wheel. You’ll hear a strange, aircraft-style starter whine, then the mammoth V-16 erupts in a raggedy roar that quickly settles down to a somewhat bumpy idle (virtually no tuning was done on the powertrain’s five engine mounts). As the engine starts, the instruments–including the clock–cycle and sweep their needles to calibrate themselves, emitting odd ticking and ratcheting clicks.

From inside the cabin, the engine’s sound is neither the jungle murmur of a Mercedes-Benz SL55 AMG nor the near-silent thrum of a Bentley or Rolls. It’s slightly rowdy and clearly coming from something in large displacement, particularly as you blip the throttle. Asked if they’d done any exhaust tuning, one powertrain engineer shrugs and says, “Well, we had four mufflers, and we threw two away.”

Ease into the throttle, and the car moves with a quickness that belies its mass and size. The automatic transmission has four gears, but we feel only two shift surges during our drive. This huge sedan glides precisely, with a catlike balance that puts us at ease. The steering feels light, and the car drives smaller than it looks. Give it more gas, and the result is a Mississippi River’s worth of torque that surges the car forward. We back off to listen for crunching, grinding, or banging. Nothing–impressive for a machine whose primary purpose is to dazzle a show crowd. The Sixteen’s ride is a bit jiggly, which doesn’t say anything positive about the suspension, since the pavement is billiard-table smooth.

The brakes don’t feel up to the engine’s grunt. Despite six-piston calipers and 16-inch rotors, not much happens when the brake pedal is depressed. Perhaps that’s because the master cylinder is remote-mounted in the trunk and operated via a tangle of electronics. We remember that our GM support crew warned us about “green” brake pads.

There isn’t much turnaround room for us at the end of one particular Proving Ground road, but four-wheel steering comes to the rescue. Turning in opposite phase to the front wheels at low speeds, the rear wheels tighten the car’s long turning circle to approximately that of a midsize sedan.

The Sixteen isn’t as polished as a production car; understandable, as that’s not its mission. But it’s easily the most refined concept car we’ve driven, which further teases us about what sort of production potential it, or some of its componentry, might have. The car’s design represents an updated, and somewhat more elegant, variation on Cadillac’s crisp-edged design language; perhaps some of the Sixteen’s themes will show up on the upcoming Seville/STS and the next-generation DeVille.

Does anyone need 16 cylinders or 1000 horsepower? No. But the idea–like the engine itself–sounds simply wondrous.

Of course it does.

Back to the original premise: What about a V-12 Corvette?

Remember that this was right after Chevrolet debuted the King of the Road, a Corvette with a double-overhead-cam 32-valve-per-cylinder V-8 designed by Lotus and built by Mercury Marine in Stillwater, Okla.

Given GM’s history with the Northstar V-8 — an unfamiliar engine design (also DOHC, built for Cadillacs and Oldsmobiles) that became notorious for head gasket (actually head bolt) failures, which result in antifreeze in the cylinder walls and engine oil in the radiator, with really bad result (If you’re driving when it’s, say, 10 below zero and your car starts to overheat, that’s not good) — the thought GM could have successfully designed a V-12 that would have worked as designed for every Corvette is, well, optimistic. A V-12 designed by someone else, as the King of the Road V-8 was, might have made more sense.

Whether a V-12 Corvette could have performed better sales-wise than the King of the Road (whose sales slowed after the first year) is a better question. For years Corvettes have seemed to pale in comparison with more exotic Ferraris, Lamborghinis and Porsches (even though they are powered by mere flat-sixes) in part because of interiors perceived to be subpar, despite the Corvette’s superior horsepower-per-dollar. (The mid-engine C8 is GM’s attempt to compete with more expensive supercars, though ironically the C8’s V-8 still uses pushrods, as every Corvette except for the first two years of the C1 and the King of the Road.)

It’s not clear that the wealthy snobs who apparently drive supercars would be interested in a V-12 Corvette any more than they were interested in the DOHC Corvette. People who appreciate American-made performance and value might have had a different opinion.

One thought on “When eight was not enough”