Given their overt statism, I’ve mostly focused on the misguided policies being advocated by Bernie Sanders and Elizabeth Warren.

But that doesn’t mean Joe Biden’s platform is reasonable or moderate.

The rhetorical clash between “leftists” and “moderates” is obscuring the deeper truth: This is the most progressive Democratic primary in history, and even if, say, Biden won the nomination, he’d be running on a platform far to Obama’s left. https://t.co/x3CMj5XqAn

This is an issue where folks on both ends of the spectrum agree.

In a column for the right-leaning American Spectator, George Neumayr also says Biden is not a moderate.

Biden likes to feed the mythology that he is still a moderate. …This is, after all, a pol who giddily whispered in Barack Obama’s ear that a massive government takeover of health care “was a big f—ing deal,”…and now pronouncing Obamacare only a baby step toward a more progressive future.

It can’t be repeated enough that “Climate Change” Joe doesn’t give a damn about the ruinous consequences of extreme environmentalism for Rust Belt industries. His Climate Change plans read like something Al Gore might have scribbled to him in a note. …On issue after issue, Biden is taking hardline liberal stances. …“I have the most progressive record of anybody running.” …He is far more comfortable on the Ellen show than on the streets of Scranton. He has given up Amtrak for private jets, and, like his lobbyist brother and grifter son, has cashed in on his last name.

If you want policy details, the Wall Street Journal opined on his fiscal plan.

Mr. Biden has previously promised to spend $1.7 trillion over 10 years on a Green New Deal, $750 billion on health care, and $750 billion on higher education. To pay for it all, he’s set out $3.4 trillion in tax increases. This is more aggressive, for the record, than Hillary Clinton’s proposed tax increases in 2016, which totaled $1.4 trillion, per an analysis at the time from the left-of-center Tax Policy Center. In 2008 Barack Obama pledged to raise taxes on the rich while cutting them on net by $2.9 trillion. Twice as many tax increases as the last presidential nominee: That’s now the “moderate” Democratic position. …raising the top rate for residents of all states. …a huge increase on today’s top capital-gains rate of 23.8%… This would put rates on long-term capital gains at their highest since the 1970s. …Raise the corporate tax rate to 28% from 21%. This would…vault the U.S. corporate rate back to near the top in the developed world. …the bottom line is big tax increases on people, capital and businesses. There’s nothing pro-growth in the mix.

And the ever-rigorous Peter Suderman of Reason wrote about Biden’s statist agenda.

Biden released a proposal to raise a slew of new taxes, mostly on corporations and high earners. He would increase tax rates on capital gains, increase the tax rate for households earning more than $510,000 annually, double the minimum tax rate for multinational corporations,impose a minimum tax on large companies whose tax filings don’t show them paying a certain percentage of their earnings, and undo many of the tax cuts included in the 2017 tax law. …as The New York Times reports, Biden’s proposed tax hikes are more than double what Hillary Clinton called for during the 2016 campaign. …Hillary Clinton…pushed the party gently to the left. Four years later, before the campaign is even over, the party’s supposed moderates are proposing double or even quadruple the new taxes she proposed.

The former Veep isn’t just a fan of higher taxes and more spending.

Joe Biden says he is 100% in favor of banning plastic bags in the U.S. …let’s take a quick walk through the facts about single-use plastic bags at the retail level. …the plastic bags typically handed out by retailers make up only 0.6% of visible litter. Or put another way, for every 1,000 pieces of litter, only six are plastic bags. …They make up less than 1% of landfills by weight… 90% of the plastic bags found at sea streamed in from eight rivers in Asia and two in Africa. Only about 1% of all plastic in the ocean is from America. …Thicker plastic bags have to be used at least 11 times before they yield any environmental benefits. This is much longer than their typical lifespans. …Though it might seem almost innocuous, Biden’s support for a bag ban is symptom of a greater sickness in the Democratic Party. It craves unfettered political power.

Let’s not forget, by the way, that Biden (like most politicians in Washington) is corrupt.

Here are some excerpts from a Peter Schweizer column in the New York Post.

Political figures have long used their families to route power and benefits for their own self-enrichment. …one particular politician — Joe Biden — emerges as the king of the sweetheart deal, with no less than five family members benefiting from his largesse, favorable access and powerful position for commercial gain. …Joe Biden’s younger brother, James, has been an integral part of the family political machine…HillStone announced that James Biden would be joining the firm as an executive vice president. James appeared to have little or no background in housing construction, but…the firm was starting negotiations to win a massive contract in war-torn Iraq. Six months later, the firm announced a contract to build 100,000 homes. …A group of minority partners, including James Biden, stood to split about $735 million. …With the election of his father as vice president, Hunter Biden launched businesses fused to his father’s power that led him to lucrative deals with a rogue’s gallery of governments and oligarchs around the world. …Hunter’s involvement with an entity called Burnham Financial Group…Burnham became the center of a federal investigation involving a $60 million fraud scheme against one of the poorest Indian tribes in America, the Oglala Sioux. …the firm relied on his father’s name and political status as a means of both recruiting pension money into the scheme.

I only excerpted sections about Biden’s brother and son. You should read the entire article.

And even the left-leaning U.K.-based Guardian has the same perspective on Biden’s oleaginous behavior.

Biden has a big corruption problem and it makes him a weak candidate. …I can already hear the howls: But look at Trump! Trump is 1,000 times worse! You don’t need to convince me. …But here’s the thing: nominating a candidate like Biden will make it far more difficult to defeat Trump. It will allow Trump to muddy the water, to once again pretend he is the one “draining the swamp”, running against Washington culture. …With Biden, we are basically handing Trump a whataboutism playbook. …his record represents the transactional, grossly corrupt culture in Washington that long precedes Trump.

I’ll close by simply sharing some objective data about Biden’s voting behavior when he was a Senator.

According to the National Taxpayers Union, he finished his time on Capitol Hill with eleven-consecutive “F” scores (hey, at least he was consistent!). 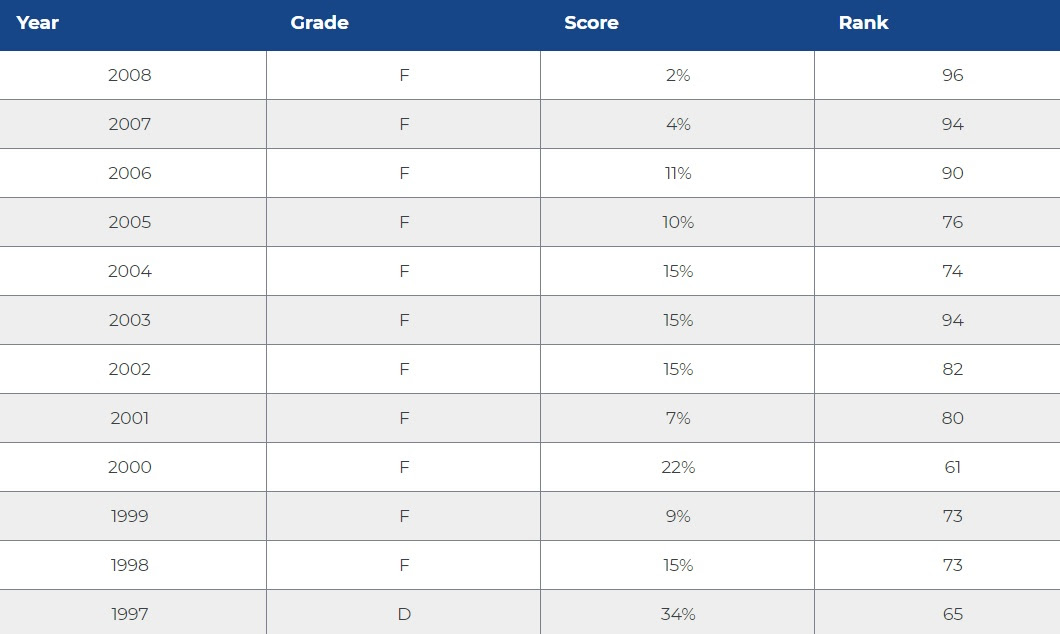 And he also was the only Senator who got a lifetime rating of zero from the Club for Growth.

Though if you want to be generous, his lifetime rating was actually 0.025 percent.

Regardless, that was still worse than Barack Obama, Bernie Sanders, and Elizabeth Warren.

So if Biden become President, it’s safe to assume that America will accelerate on the already-baked-in-the-cake road to Greece.

P.S. Of course, we’ll be on that path even if Biden doesn’t become President, so perhaps the moral of the story is to buy land in Australia.