CBS News reports a story from my former area:

A Wisconsin high schooler is fighting to wear shirts with images of guns to school. Matthew Schoenecker says his T-shirts reflect his personal beliefs, but after the Parkland school shooting, administrators at his high school said his shirts were inappropriate and that he could no longer wear them. He is suing his principal over the ban. 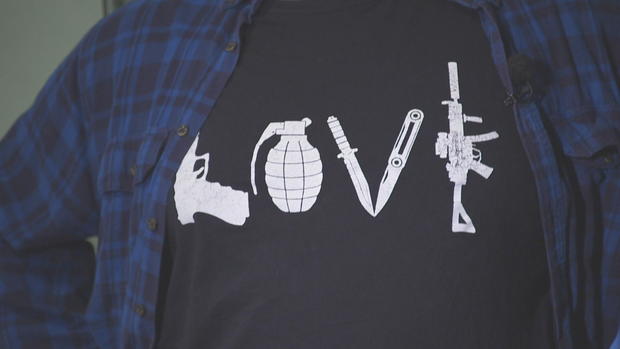 Shooting is an activity the Shoeneckers enjoy as a family, but it’s one Matthew now says is being used against him.

“They just said something like, ‘You could be the next school shooter maybe,'” he told CBS News’ Nikki Battiste.

The remarks are part of the backlash the 15-year-old now faces for wearing T-shirts with images of guns and a grenade in school.

Matthew says he’s been wearing the same shirts since the fall. But his parents say it was only after the Parkland school shooting in February, that the school’s principal sent home a letter telling Matt to “change the shirt” because “it was inappropriate.” When Matt refused, he was moved to a cubicle for two days.

“He says, ‘Well, your son’s T-shirt’s promoting violence,'” Matt’s mother, Pam Schoenecker said. “I said, ‘His T-shirts celebrate diversity. And then his other T-shirt says, ‘love.’ How is that promoting violence? None of the times was he able to answer that question.”

In April, Matthew filed a lawsuit alleging that “there are no school rules explicitly banning wearing clothing that depicts firearms” and that doing so “violated his freedom of expression.”

“He is perfectly within his First Amendment rights to wear those shirts,” John Monroe, Matthew’s lawyer, said.

Monroe is being paid by Wisconsin Carry, a pro-gun group.

“The issue here isn’t really a gun issue, it’s a speech issue. And, you know, if Parkland had never happened,” Monroe said.

Cases like Matthew’s are popping up across the country. In Nevada, a middle school student is suing his school district after it also barred him from wearing T-shirts containing images of guns. In a statement to “CBS This Morning,” a school spokesperson said, “the child was not harmed in anyway except for being asked to wear a sweatshirt over his shirt.” Lawyers in both the Wisconsin and Nevada case say the schools allowed students to participate in school walkout activities supporting gun control.

“I just, I just think they’re hypocrites….You can promote an anti-gun agenda but then you have a student that comes in there, knows history, knows the Constitution and you’re going to tell him he can’t,” Pam said.

“This is a complex issue. I think that schools should have the ability to regulate a student’s clothing for a whole host of reasons,” CBS News legal analyst Rikki Klieman said. “We don’t want violence in schools. We don’t want gang signs, we don’t want people with Nazi swastikas….These things are all obvious that we would not condone. But the mere picture of a gun? Is that sufficient?”

While the lawsuit is pending, Matthew can still wear his favorite shirt to school, expressing a belief the Schoeneckers say is a just a normal part of their lives. But why not just stop wearing the shirts for a while?

“Because that’s just who Matthew is….He’s always gone hunting, he’s gone target shooting,” Pam said. “The Second Amendment thing, the Constitution, all of that is part of our family.”

“I get where they’re coming from. But at the same time, they’re expecting my son to change who he is because of what is going on in another part of the country,” she said.

The Schoeneckers said they are not asking for financial damages in their lawsuit. They just want Matthew to be allowed to wear his shirts in school. CBS News reached out to Markesan High School and its attorneys, but they declined to comment.

Nine Marquette University High School students on Wednesday morning walked out of class to show support for the Second Amendment.

“We’re here for the Second Amendment,” said junior Jack Dubois, who was wearing an NRA sweatshirt to make his point. “There’s not many of us because our school doesn’t support it. They said, basically, ‘You’re going to get [detention] if you walk out.'”

The students were taking part in walkouts happening nationwide called Stand for the Second. They are protesting to guarantee their constitutional rights to bear arms.

WISN 12 News spotted school officials scattered around the building, even hearing one worker yelling at the students to come back in.

“It’s not just about the Second Amendment. It’s about the First Amendment,” said junior Jack Kujawa.

Shortly after making this statement, Kujawa was interrupted by a school official, who said, “I warned you. Don’t be late.”

A Marquette University High School spokesman told WISN 12 News that “no student was told they would face detention for walking out. Students were allowed to leave the building to express themselves via the walkout, and it was the position of the school that they would be allowed to express their First Amendment rights.”